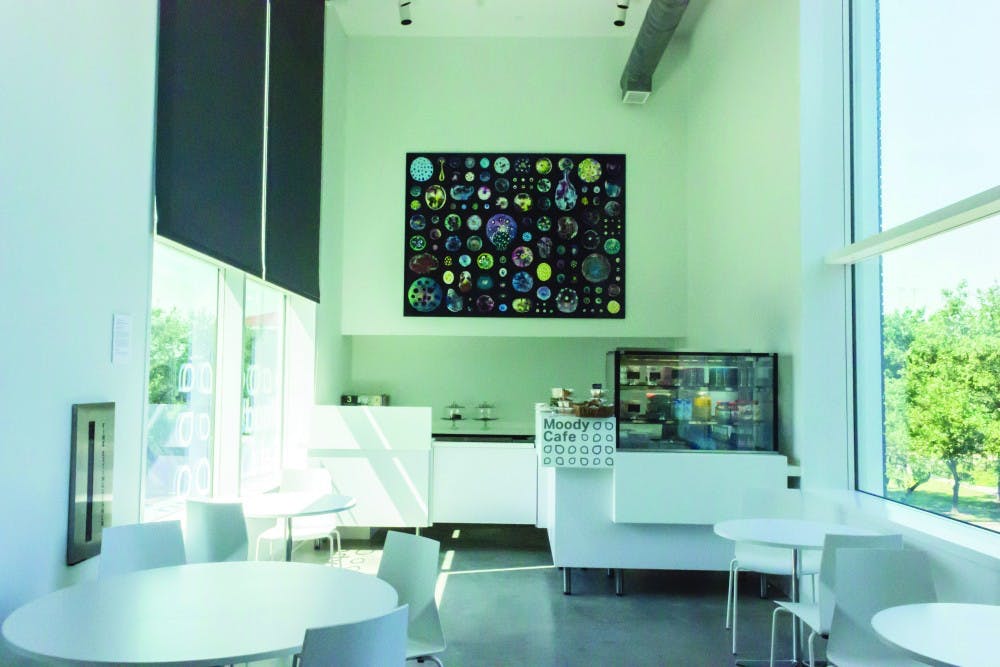 “The cafe, like the Moody, is a creative, open space, available to everyone,” Weaver said.

The cafe is open from Tuesday to Saturday, 10 a.m. to 5 p.m., similar to the Moody Center’s public hours. The cafe does not currently accept Tetra, but is actively working with Housing and Dining to implement the payment system, according to Weaver.

Salento, which has locations in Rice Village and Brochstein Pavilion, operates the cafe, according to Weaver. The cafe offers an assortment of dishes including a smoked salmon wrap and a kale and cabbage salad and features a laptop bar with wifi, Weaver said. There is seating inside the cafe area, outside on the lantern terrace and in the second floor lounge. Food and drink are allowed throughout the building, except in the Brown Foundation Gallery.

According to Weaver, the most unique element of the cafe is the art in the space.

The cafe has two acrylic panels by American artist Gordon Terry, Weaver said. The first panel, “Objects of Infinite Scrutiny, Fetishization, and Wonder,” is designed to show living organisms, while the second, “Anatomy of a Phenomenon,” reflects the relationship between “things seen and unseen.”

“Moody is somewhat removed from the rest of campus, so having a cafe there provides incentive to stay and do my work,” Deyanov said. “While I enjoy the art and aesthetic of the place immensely, I rarely stay there long.”

Grace Tan, a Brown College freshman, said she didn’t know that the Moody Center had food.

“I think I’d only go there if I was in the area,” Tan said. “The Moody Center does look like a good place to study though.”

Sid Richardson College senior Luis Zelaya, who works at Coffeehouse, said he was not aware there was a cafe.

“I mean, I’m all in on there being multiple places to get coffee,” Zelaya said. I’ve been so-so on the Moody Center as a whole because I think it’s located in an inconvenient area, but I think pairing art and coffee has some merit to it. They both have a lot of love and a lot of care put into them. In a way, it’s similar to Coffeehouse.”