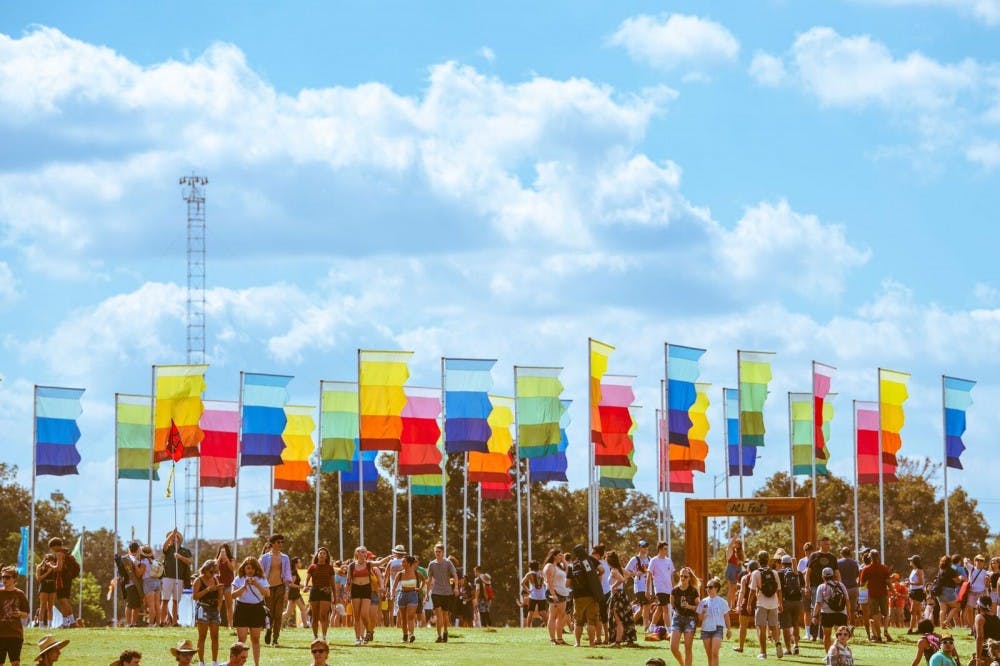 Over midterm recess, the Thresher took on Austin City Limits. A widely attended annual music festival held in Austin, Texas, ACL was held over two weekends, the first of which perfectly coincided with Rice’s four-day fall recess. This year, the lineup boasted a wide variety of music, from British rapper and activist Skepta to highly anticipated rock stars The Killers to mesmerizing R&B artist Solange. Two ACL virgins bring you the best and worst of the festival’s first weekend. Please note that because there were only two of us, it was physically impossible for us to watch every single act. So don’t come at us later for not having included your favorite, so-small-they-make-you-look-hipster band in the review.

She may not have been Friday night’s official main act, but if you ask anyone who got to bask in her glory, they would agree that Solange delivered. Backdropped by a monochromatic set, band and dancers, Solange’s red-washed performance was visually as well as auditorily stunning. Her impossibly smooth voice was matched by dramatic choreography that entranced the audience. What’s more, she seemed to surpass her range, managing to sound even more breathtaking than in her 2016 album, “A Seat at the Table.” The majority of her performance derived from this album, including her well-known single “Cranes in the Sky.” During “F.U.B.U.,” she sang the lyrics “For us, this shit is for us” directly to a black woman in the audience in a moment of tender acknowledgment. Her spotless technique and emotive delivery grant Solange a spot at the top of our “best of” list.

Waiting around for an artist to perform can be tedious, hot and cramped. Luckily, we had the opportunity to be entranced by skydivers, who fell through the air with fire and great fanfare to Tom Petty’s “Free Fallin,’”one of the weekend’s several tributes to Petty’s legacy.

With the advent of Chance the Rapper’s optimistic brand of hip-hop and its resulting success, some have coined #BlackBoyJoy as a new wave of the genre, following a tweet made by Chance in which he first used the hashtag. The focus is on allowing black men to enjoy carefree expression and happiness in the midst of a social climate that typically restricts it. Of the up-and-coming artists that embody this wave, D.R.A.M. especially stands out — his act made it impossible not to smile the entire time. Wearing a ”Legalize” T-shirt and golden pineapple shades, D.R.A.M. performed his popular songs “Broccoli” and “Cash Machine” with an infectious grin and obvious enjoyment. High energy, catchy tunes and frequent shoutouts to his mother made this performance the most heartwarming we saw.

Simultaneously hype and blissfully happy, Chance tore up his headliner act with energetic renditions of “No Problem” and “Sunday Candy.” While other headliners like JAY-Z struggled to keep the crowd alive, Chance’s act saw moshing, fighting and swaying as the crowd jammed to classics off of his famed mixtapes “Coloring Book” and “Acid Rap.” With a crowd filling half of Zilker Park, Chance still managed to keep his performance intimate.

“There’s too many people here,” Chance said, playing shy. “Some of y’all are gonna have to leave before I can perform.”

Finishing with “Blessings,” Chance showed his well-known dedication to religion and to God. While this performance might have been unfamiliar to non-practicing people or people of other faiths, we found it hard to not be entranced by Chance’s obvious dedication to his faith.

ZHU kept festival-goers from seeing headliners The Killers and Gorillaz as he played his set well over time. Displaying a controlled visual minimalism that is rare at festivals, ZHU used monochromatic lighting and visceral visuals to accompany his body-shaking, bass-heavy remixes. While a hat and sunglasses revealed little about the enigmatic DJ, his surprisingly deep voice shouted out occasional encouragement and sentiments about Austin, Las Vegas and the US. ZHU does not fall into the trap that many EDM artists do; by letting his music speak for itself, he does not rely on meaningless shouting to hype up the crowd. Instead, the crowd rocked out with no guidance to hits like “Faded” and “Hometown Girl” while fog billowed out from the stage. Raw talent echoed from all parts of the stage: ZHU sang his own falsettos, accompanied by a guitarist and a saxophonist who provided instrumentals.

Despite the misfortune of performing at the festival’s hottest temperature all weekend, Rainbow Kitten Surprise played with such passion that the audience almost forgot that they were melting. Vocalist Sam Melo delivered 30 minutes of pure energy, relying on his powerful voice and eccentric dance moves (i.e., tons of flailing and spinning) to invigorate the crowd. Smaller artists know how to take advantage of the opportunity an afternoon show at ACL can grant them, and RKS did not back down from the challenge, as they left it all onstage with intense guitar solos and Melo’s denim button up crumpled in the corner.

Going to a festival (or Austin for that matter) means you’re going to end up overpaying for the basic necessities of life: food and water. Still, this is America the Great, so at least ACL could boast a wide array of options when it came to being scammed. Stands offered everything from vegan empanadas to phat gyros for the small fee of half a gallon of sweat and all your cash. The star of the lineup, JuiceLand, offered $6 so called “aguas frescas” that were so refreshing and delicious that I was revived from a near-death state and didn’t even mind that I could buy an authentic agua fresca for half the price back home. Thank you, JuiceLand. I owe you my life and grant you this honorable mention in appreciation.

It’s always refreshing when rising artists continue to show love for their fans. Louis the Child rose to prominence with “It’s Strange” and have continued their rise to the top with original melodies like “Love is Alive.” Interspersing their original songs with pop remixes, Louis the Child topped their Sunday act by crowd-surfing. After the set ended, they hung around for another 30 minutes to take photos and chat with their fans. Fan love on this level, especially at large festivals, is becoming increasingly rare – it was nice to watch Louis the Child buck that trend.

The people at ACL

Festivals are prone to disaster. Overheating, overdrinking or anything else on a whole spectrum of potential problems makes attending a festival a risky event. However, it always seems to end up okay. From the volunteers who ran around distributing water at every possible opportunity to the lady who handed us a step stool so we could see above the crowd, festival-goers often go above and beyond to ensure that everyone around them is safe and having a good time. Also, #werk those outfits: We saw minimal cultural appropriation and maximum good looks.

JAY-Z kept us waiting, arriving around 15 minutes late to great huzzah. However, his performance did not live up to the hype. It lacked energy and dragged on at times, especially as he performed feature after feature instead of his originals. At around 9:05 p.m., 30 minutes before his expected finish, JAY-Z left. He came back to perform “99 Problems” and then officially exited the stage, cutting his set about 20 minutes short. The second-to-worst part was, we were almost glad to see him leave. (The worst part was that he didn’t bring out Beyoncé.)

Some of the sets could have used better planning. Cut Copy suffered from muted vocals, a problem thankfully fixed before Chance the Rapper’s set. Tove Lo’s set was interrupted by a period of sound issues as well. For a festival this size, ACL should be better prepared.

After the mass shooting in Las Vegas during the Route 91 Harvest Festival, ACL released a statement on Twitter reassuring festival-goers that security would be “TSA-level.” This equated to bag searches, random pat-downs aka groping and arbitrary metal wand waves. The guards were often confused about what was allowed in, joked around with the prettier festival-goers and spent more time massaging butts than looking through pockets. None of these precautions made us feel particularly safe; although we’re sure they would have caught large machinery, it wasn’t hard to fathom someone sneaking in smaller weapons. With large crowds oftentimes packed into obscene density, ACL should step up their safety by hiring professional security and developing a more sustainable bag-checking system.

The people at ACL

There’s nothing like an overcrowded festival and the summer heat to make you see the worst in people. Sure, there were volunteers spraying us down with water and strangers whose gestures benefited us, but for every one moment of hope for humanity, there were about 17 moments of irritation. The mass of people watching a football game instead of the acts, the toddlers whose presence made you feel ~really~ self-conscious about your state of inebriety, the confrontational audience members that acted as if they hadn’t just shoved their way through hundreds of people as well, the fact that humans sweat and smell — the list could go on indefinitely. But the worst part of it all is knowing that someone out there is talking about you, complaining about that one girl who ruined a performance with her off-pitch singing.