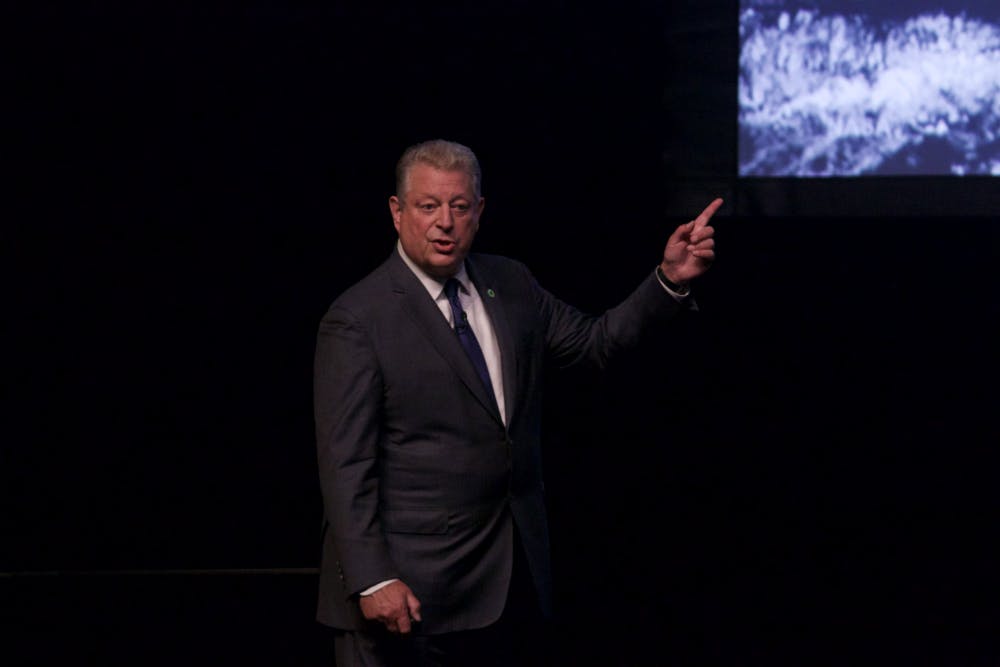 Gore organized his talk around three big questions: whether society must change climate practices, whether it has the ability, and whether it has has the will. Before the talk got underway, Gore found an opportunity to connect with his Houston audience through his role on the executive board of the Doerr Institute for New Leaders.

Gore began the speech with statistics arguing that the world is trending towards hotter temperatures and witnessing more violent storms from India to Texas. Gore said six Texas towns have recently set or tied all time temperature records.

“The accumulation of manmade global warming pollution in the atmosphere now traps as much extra heat energy in the earth system as would be released by 400,000 Hiroshima-class bombs exploding every 24 hours,” Gore said. “That is an enormous amount of energy and it is radically disrupting the ecological system that has given rise to the flourishing of humankind.”

Gore also addressed the role that climate change may have played in intensifying the effects of Hurricane Harvey. Among other factors including warmer ocean waters, he said warming-induced Arctic ice cap melting has resulted in distortions in the global jet stream, which affects storm movement. This played a role in why Harvey remained over Houston for so long, according to Gore.

“We talk about the physical consequences of the climate crisis, and we don’t often talk about the disruption of the ability of people to govern themselves and the disruption of political stability,” Gore said. “The worst drought ever measured in 900 years of records available centered on Syria destroyed 60 percent of all the farms in Syria and killed 80 percent of all their livestock years before civil war broke out in Syria.”

The Syrian refugee crisis is an example of geopolitical conflict due to global warming, according to Gore. He said one of the drivers of the crisis was a massive drought that swept over Syria beforehand, devastating the local agricultural industry.

In an aside, Gore said he believed the United States should welcome refugees.

“Common sense and history tells us that if we can act to prevent a massive increase in refugee flows on the part of people who wouldn’t want to leave their homes if they didn’t have to,” he said. “If the flows of refugees reach a certain level, some political systems are vulnerable to nativism and toxic nationalism.”

Ultimately, Gore said he was optimistic. He said renewable energy sources are beginning to compete with fossil fuels in the market, pointing out that Houston is a leading innovator in wind energy despite its status as an oil and gas cente.

“Subsidies for fossil fuels are 26 times larger than the subsidies for renewables, globally 35 times larger,” Gore said. “One of the things we could do is stop making the taxpayers of this country stop shelling out money to subsidize. I’m so glad you applauded because I can barely believe I’m saying that here in Houston, Texas.”

Gore did not spend much of the speech time addressing politics, or those who do not believe in man-made climate change.

“Everything I have mentioned so far is extremely well established, there is really no reason to speak up,” Gore said. “You’ll always find some denier out there, but there’s really no reason — I’m sorry if that sounded dismissive, I just don’t know what to say anymore.”

Duncan College sophomore Joseph Duffey said he appreciated the substance of the talk but thought it might not persuade skeptics of climate change.

“[Gore] did a very general overview, but he didn't really get into specific things that climate change deniers say and argue against them,” Duffey said. “He addressed general statements from them, but he didn’t really address anything specific.”

“I went in expecting it to be a big downer, but [Gore] did a really good job emphasizing optimistic things,” Figueroa said.

Gore concluded the speech by framing action on climate change as a matter of right versus wrong.

“We are at a tipping point on the climate movement,” he said. “Our home is at stake and if anyone tells you that we don’t have the will to change, let them remember that political will is itself a renewable resource.”