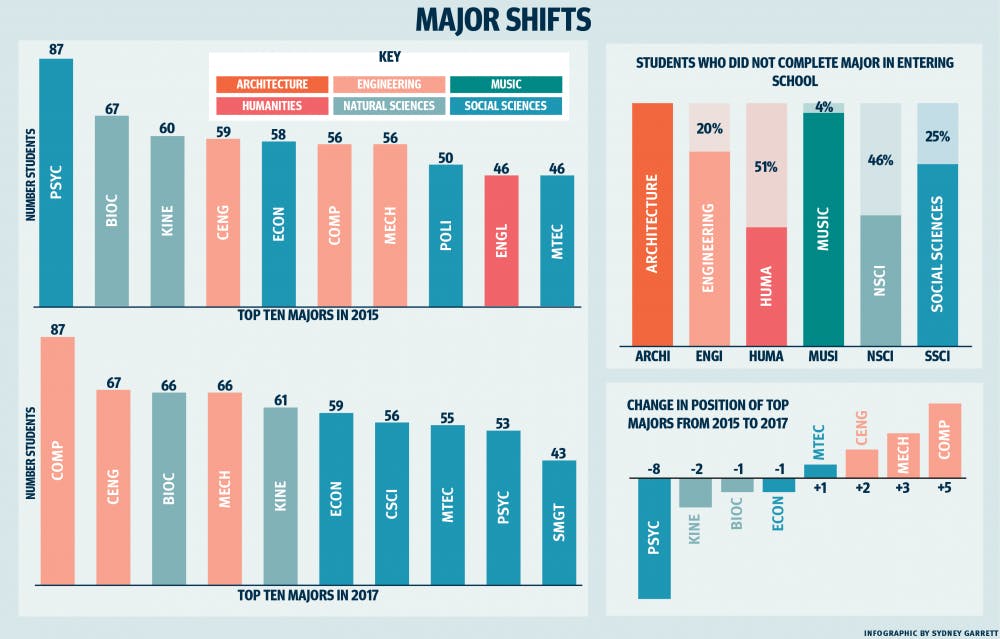 After 2015, no majors in the humanities school have ranked in the top 10 most popular majors for graduates at Rice University.

A recent study by the Office of Institutional Research shows a shift toward engineering and away from humanities in majors students graduated with over the last three years, as well as differences in the academic schools students switch to and from.

In 2015, English was the only major in the humanities school to make the list of top 10 most popular majors among graduates, ranking at ninth place. The annual number of graduating humanities majors dropped by 30 percent from 2011 to 2016.

Lora Wildenthal, interim dean of humanities, said the shift may be due in part to the cost and increasing occupational necessity of a college degree.

“There is an intense focus on vocational preparation among students and their parents these days, and liberal arts subjects seem not to offer that,” Wildenthal said. “I don’t share that perception, but it is definitely out there.”

According to Wildenthal, a history professor, the meaning of attending college has changed dramatically over the last century.

“At the time of the Vietnam War, many young people believed the field of history held the answer to life’s big questions,” Wildenthal said. “Today, young people tend to believe that psychology as a discipline holds the most fascinating answers. There are cultural moments for different kinds of knowledge.”

Psychology, which was the most popular major for 2015 and 2016 graduates, fell to the ninth most popular in 2017 with 34 fewer graduates than the previous year.

Philip Kortum, an associate professor of psychology, said it is hard to explain why this decrease might have happened, but that it could simply be a normal year-to-year variance in graduation numbers. Another explanation is that this is a result of the increase of hour requirements from 35 to 47 for 2013 matriculants and later, according to Kortum.

According to Dean of Social Sciences Antonio Merlo, there is no evidence in the Report to the President under “Count of Majors by Level” of an overall decline in the count of declared majors in the social science school. Additionally, data from the Office of Institutional Research shows that the number of students entering in as social science increased by 30 percent from 2010 to 2016.

Simultaneously, majors in the engineering school have experienced the largest increase in popularity, taking the top three spots in 2017, while they remained fourth and below in 2015 and 2016. Overall, there was a 64 percent increase in annual engineering bachelor degrees awarded from 2011 to 2016.

Given the rise of engineering majors as the social sciences remain relatively stable, Hannah Kaplan, a social policy analysis major, said she felt opportunities for social science majors are not as abundant or well-advertised as they are for STEM students.

“Social science students learn pretty quickly, from the lack of attention at the job fair to talk of gaming the distribution system, that they are not as emphasized on campus,” Kaplan, a Duncan College sophomore, said.

According to Luay Nakhleh, chair of the computer science department, the department revised the curriculum a few years ago to emphasize problem-solving in a variety of disciplines.

“The new curriculum became much more appealing to students and led to more students deciding to major in CS,” Nakhleh said. “You often hear the story from Rice students along the lines of, ‘I came to Rice wanting to major in something other than CS, and took COMP 140 out of curiosity. I liked the course and decided to continue with CS.’”

Scott Cutler, a computer science professor and major advisor, said he believes the major has become popular because of the increasingly digitalized world and the thriving job market for computer science.

“Virtually every Rice student carries a computer with them in the form of a smart phone with more computing power and connectivity than the most powerful computers not so long ago,” Cutler said. “It is a hot topic across all of academia and it is not surprising that computer science has become the most popular major.”

Cutler said he advises against pursuing the major just because it seems like an exciting field.

“It is tempting to want to join the hottest field or to be attracted to one that promises great jobs after college,” Cutler said. “But students need to find out if they have a natural ability to be at one with the computer. Some students excel and get great joy when a complex project starts working. For others, understanding is more difficult.”

While it may be no surprise that 96 percent of architecture students and music majors completed at least one major in their original school, 46 percent of students who entered as natural science majors did not complete a major in the school.

Hanszen College junior Leya Mohsin said the process of switching from chemistry to mathematical economic analysis and policy studies after realizing her interests had changed was a difficult one.

“I took Honors Chemistry my first semester, and quickly realized I actually hated chemistry and couldn’t imagine myself doing it for four years, nor could I imagine myself in any of the career options you have with a chemistry degree,” Mohsin said. “I panicked, not knowing what to do with this new information. When I thought about all the classes I had ever taken, and what I actually liked, I realized I was way more interested in the social sciences.”

Mohsin said she believes that her experience reflects a larger trend at Rice.

“The idea that what you were good at in high school is absolutely what you should major in is an idea held by many incoming students,” Mohsin said. “While not everyone makes as dramatic a switch as I did, very few people I know have stuck with the major they came in with.”

Kayla Cherry, a Lovett College sophomore, spent her freshman year taking classes in the natural science division and considered a major in the social sciences before switching to English.

“As I was having my first public cry in the middle of commons at 1 a.m. doing my bio lab report, I realized that people who actually were destined to be doctors were not this miserable,” Cherry said. “I’ve always been good at English and horrible at science, so I took a leap of faith and decided to major in English because it was something I genuinely enjoyed.”

“It’s difficult for us to be able to know exactly what we want to study the second we walk through the Sallyport,” Campos said. “I’m currently set to study cognitive science, but when I came into Rice, my perspective changed. It’s an interdisciplinary major, which is a factor that intrigued me initially, but my preference may be shifting to a more specific area of study.”

Ultimately, Cherry said her experience taught her to pursue her passions rather than concern herself with appearances.

“The only solid advice I can give is cliché, but it still took me a year to understand: Pursue your passions regardless of stigma, because when you’re truly passionate about something your motivation to succeed will come naturally.”