Trash Talk: The Bayou Bucket is Back 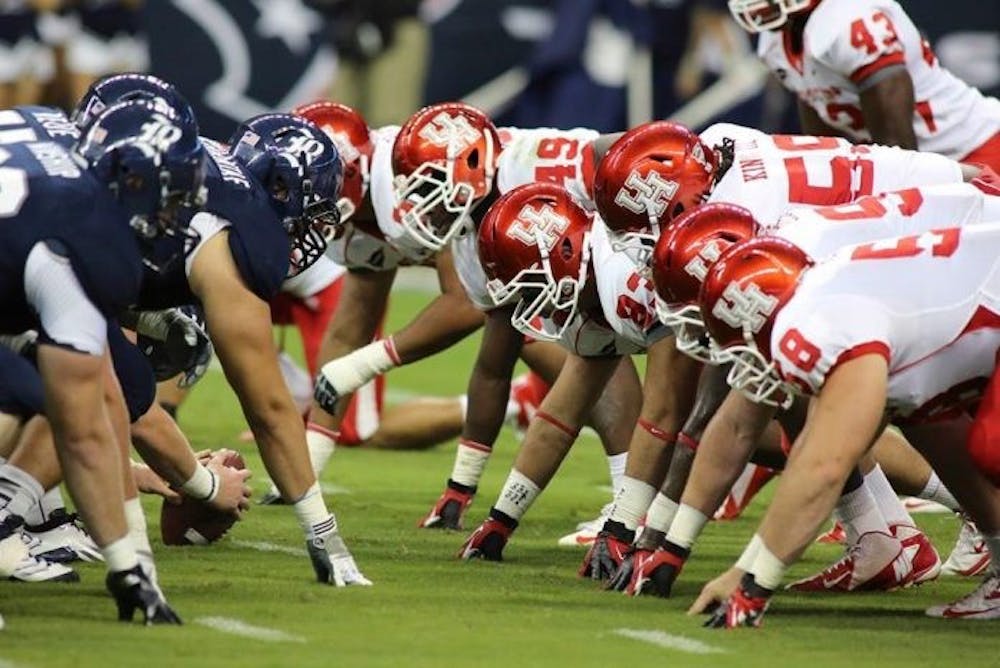 Editor’s note: To prepare for Saturday’s game, The Rice Thresher and The Daily Cougar have exchanged a few words, all in good fun, of course. Both editorials will appear in the Thresher and the Cougar.

UH would like to extend a greeting as our two schools once again renew our sporadic rivalry. We know some of you are good at math, or something, so you should be able to figure out these simple stats: We’ve played the Bayou Bucket three times since 2010, and the Cougars won every time.

We know a lot has changed since 2010. Barack is out; the Cheeto is in. We’ve cycled through five different new iPhones. Disney reanimated Star Wars.

Animals that were fish when you last beat us at football can now walk. That’s an evolution joke. You get it because your parents didn’t hug you enough, so intelligence defines your entire self worth.

The world may be radically different now than seven years ago, but you still won’t win. Sorry.

Alumni from each of our schools have been mayor, but at least we got the cool black one, who steered us out of the biggest rainstorm in U.S. history.

And with all the funding in the world, you’ll never have a black Twitter.

When your team starts underperforming on Saturday night, it’s partially because of jetlag, and partially because you suck. You’re probably still in a daze from traveling to the beautiful land down under, where Stanford kicked your ass 62-7… two weeks ago.

Coach Bailiff didn’t take you on a study abroad trip; you were there to show the Aussies what America’s game looks like. But it wasn’t a total failure. More people showed up to your game 8,500 miles away than any of your games on campus.

But we get it; you played Stanford because you want to be Stanford: an academic powerhouse that also excels at sports. Newsflash: You’re not.

And you’re also trying to be the Hogwarts of the south, with your owls and all of your fancy residence halls. But your magic powers don’t translate to the pitch.

We’re looking forward to seeing you guys Saturday night. We doubt you can say the same. Just don’t be upset with the goose egg you’ll be leaving with.

The silver medal. It’s an honorable award. You wear it around your neck and bring it home to show your mom what you did at school. She probably puts it on the fridge, next to that collage your little sister did in art class.

The University of Houston proudly shows the world its silver medal each and every day. The second best university in the city of Houston, unchallenged for years. This whole Bayou Bucket thing? Pfft. Rice won supremacy in Houston decades ago. Really, we don’t know why we’re wasting our time trashing your university. We honestly feel bad.

The University of Houston? Man, we don’t know what to say about you guys. We could use the old “You’re stupid, haha” jokes, but nobody needs to be reminded of that. Or we could go with “Couldn’t get into UT, huh?” but we think the rejection letters speak for themselves. We would use “You’re gonna work for us someday,” but that’s probably a little too true.

Instead, we’re going to praise you. For all of your university’s shortcomings, we have to admit: UH’s athletic department is outstanding. First, let’s talk about the brilliant ‘UH’ logo. It’s wonderful that it spells out the sound one of your typical juniors makes in her ‘intro to algebra’ course. Truly a testament to astute design.

Second, we have to applaud your football program. You really have a wonderful team. Your program is so good that just as it was peaking, the coach left for a better option. Oh, and you almost made it into the Big 12. Do you have a banner for that, or is there not enough room next to that one for the single conference championship you’ve won in the past decade? Hey, that’s tied with us here at Rice! Congrats!

Finally, we gotta hand it to you. Your whole ‘H-Town Takeover’ slogan is really catchy. It almost makes us want to believe it could happen. But you might want to keep your expectations in check. Let’s be honest. Rice runs this city. You want to talk taking over Houston? Try beating us on Saturday — that’ll be a start. Then try winning a national championship in a sport that people actually care about. We’ve done that. Have you? (Note: that sound you hear is UH students desperately trying to argue that they care about college golf and cross country. It’s not working.)

Until you’ve done something that matters, keep wearing your silver medal with pride. We’re enjoying life here at the top.

Last year, the Board of Trustees announced that Rice would be increasing the undergraduate class size 20 percent — nearly 800 more students — by 2025. The quick rollout of this decision has left current students with a fracturing academic and social experience. Going forward, the administration needs to better plan for maintaining the small school benefits and residential college culture.

COVID outbreak could have been mitigated with proactive testing

On Dec. 26 of last year, President David Leebron and future president Reginald DesRoches sent an email to the Rice community regarding plans for this spring semester. The email proclaimed that Rice had “entered a new and different phase of the pandemic.” Specifically, the email stated that the university would “begin to shift our policies to a posture that recognizes COVID-19 as endemic and facilitates our ability to deliver the best education and opportunity to our students, while still taking reasonable precautions.”

After three years and much anticipation, we finally had a normal Beer Bike. None of the past week’s events could have been possible without the hard work of every Beer Bike coordinator, bike captain, chug captain and every student, staff and alumni who played a role in making Beer Bike 2022 the spectacular event it was.