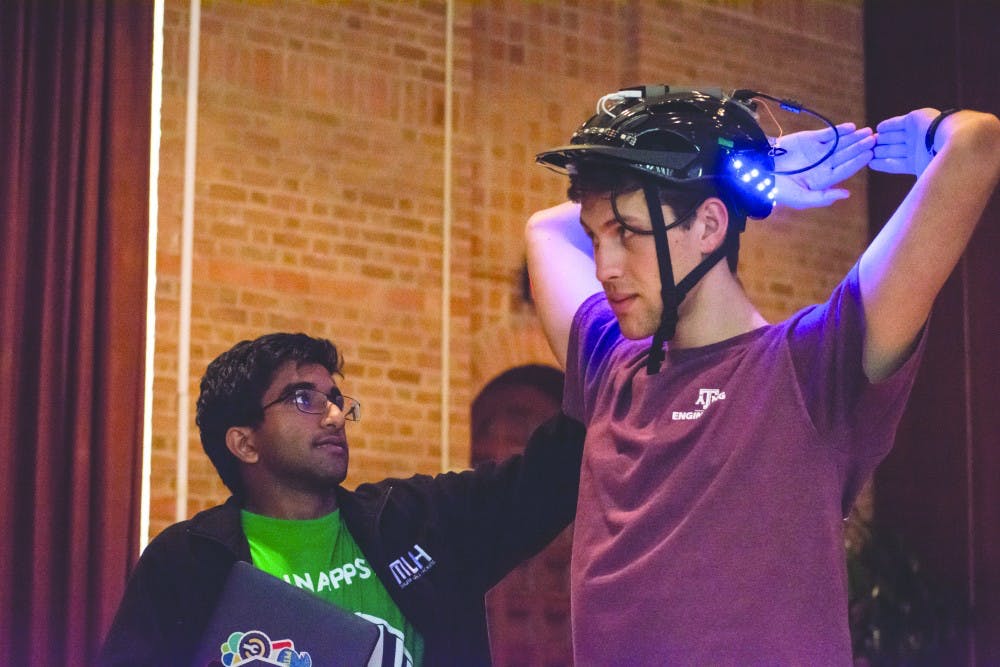 Powered by Red Bull, caffeine-infused chocolate and coffee cereal, more than 400 participants packed into the Rice Memorial Center Grand Hall to compete in the 36-hour-long HackRice competition this weekend.

“We were completely unrestricted, allowing all of us to come up with something that satisfies our desires to learn and to create, something that can be lost when all of our programming is restricted to classes and research,” participant Ariel Feldman, a Lovett College sophomore, said.

Student creations ranged from a web application that visualizes music tastes to a voice activated system, called Alexa, that generates political speeches based off a repository of previous presidential speeches.

“When you asked Alexa for a speech by Bernie Sanders it would talk about affordable healthcare and the minimum wage and when you asked for Trump it would ramble about building walls and locking her up,” Aidan Curtis, a HackRice team member and Brown College sophomore, said.

Curtis said the system was not perfect — some speeches abruptly switched topics from climate change to abortion.

“We created this because most of us had experience in machine learning and wanted to build something that everyone could relate to and find humor in,” Curtis said.

Teams were judged on four categories: technical difficulty, impact, innovation and polish, according to HackRice co-organizer Abhijeet Mulgund. The 18 sponsor companies of HackRice, including Two Sigma and Facebook, donated a total of $49,000 to the event, Mulgund, a Wiess College sophomore, said.

The winning team, which did not include Rice students, modified a selfie stick to aid the visually impaired. The selfie stick vibrates to warn the user when an obstacle is near and also uses visual recognition software to communicate out loud pictures taken using the selfie stick, according to team member Holly Buteau, a graduate of Oregon State University.

Alexander Lu, a Jones College senior, and his teammate from Texas A&M University won second place for their idea to improve safety for longboarders. A display tells riders their speed and revolutions per minute and a rear lighting system indicates to others whether the rider is speeding up or slowing down, Lu said.

“Obviously, we wanted to win first place, but I think the team that won deserved it for their hack,” Lu said. “Placing at all is a great validation of the work Jeff and I put in, and we look forward to participating in more hackathons to test our skills.”

Tori Joshi, a Martel College sophomore, and her teammates from other universities developed a web application called Shelper, inspired by Hurricane Harvey. Shelper connects people in natural disaster shelters with donors around the country who can send in items through Amazon.com, according to Joshi.

“Right after Harvey, I worked with the Secret Group to collect and sort donations and then distribute them to shelters around the city,” Joshi said. “People kept donating clothing, but people needed other things, like food and water. So what if there was a way for people in those shelters to ask donors directly for items they specifically needed? And that’s how Shelper was born.”

Feldman and her teammates, Lovett College sophomores Minh Le and Mak Jankovsky, began working on an Android application using Java with a cylindrical chessboard. Feldman said Le came up with the concept while watching Jankovsky try to create a more challenging chess game.

By combining their backgrounds in neuroengineering, mathematics and game design, Feldman said they developed an artificial intelligence opponent that learns the players’ moves and becomes harder to beat with each game.

“I feel so very lucky to have spent 36 hours building this app with two of the smartest, most imaginative people I know, and look forward to continuing to work on it with them in our limited free time in the months to come,” Feldman said.