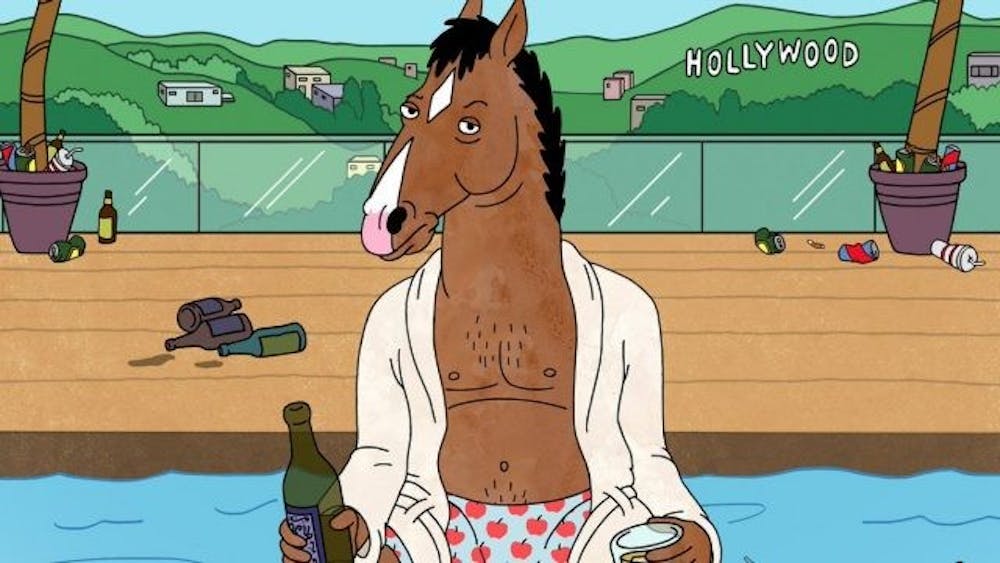 Last Friday, the best show on television returned to our screens for its fourth season. Though the show does not have a huge viewership, its appreciation by fans and critics is nearly unparalleled. With this series, Netflix has produced one of the all-time great pieces of longform cinematic art: its name is “BoJack Horseman.”

“BoJack”’s popularity may be confusing to new viewers. The premise alone is utterly bizarre: A middle-aged anthropomorphic horse who starred in a popular ’90s family sitcom attempts to navigate the crazy world of the entertainment industry while simultaneously retaining his sanity.

This genius comes most obviously from the writing, possibly the best in the entire contemporary television landscape. Led by creator Raphael Bob-Waksberg, the writing team has a masterful grasp on the “BoJack” universe and the characters who live in it. The characters in “BoJack” feel like actual people with actual problems that the audience can identify with. Characters deliver wacky one-liners one moment and heartbreaking monologues the next, just as people do in real life. The show’s plots reflect this tonal variance. In its most hilarious moments, the show centers around zany antics that range from wild dentist clowns to primitive underground insect kingdoms to a ski race for the California governorship. The show is a cartoon, after all, and it’s not afraid to take advantage of the absurdity that the inherently unrealistic medium allows.

On the flip side, the show also has many moments that can only be properly described as soul-crushing.“BoJack” is unafraid to address stories that might deeply affect or disturb audiences on an emotional or psychological level. Among the topics broached are dementia, sexual orientation, eating disorders, adultery, abuse, war and the painful inescapability of the past, and that’s just this season. In many ways, “BoJack” is the most depressing show on television. “BoJack” is made for adults, and it speaks intelligently and philosophically to that demographic without compromising its goofy sense of humor.

The show’s other defining strength is its vocal performances, which continue to be flawless. Will Arnett somehow mines even greater depths of his dramatic ability than he has in previous seasons as the titular BoJack Horseman, demonstrating a level of acting beyond his entirely comedic oeuvre. Similarly, Alison Brie, Amy Sedaris and Paul F. Tompkins remain stellar as Diane Nguyen, Princess Caroline and Mr. Peanutbutter respectively, perfectly walking the line between comic farce and dramatic authenticity that makes “BoJack” unique. Wendie Malick’s tragic performance as BoJack’s mother, who is given more screentime than in past seasons, is particularly memorable.

Sharing more information about the content of the fourth season of “BoJack” would be nearly as cruel as the stories that unfold within it. If you have not yet started watching the show, get on it immediately. You are missing the best animated show on-air, the best show Netflix has ever produced and probably the best show on television period. It is a rare occurrence that a show this groundbreaking and special comes along, one that reaches down and touches your heart in the way you always hope cinema can. “BoJack Horseman” is unlike any show ever to come before and most likely any to come after, making it an absolute must-watch.