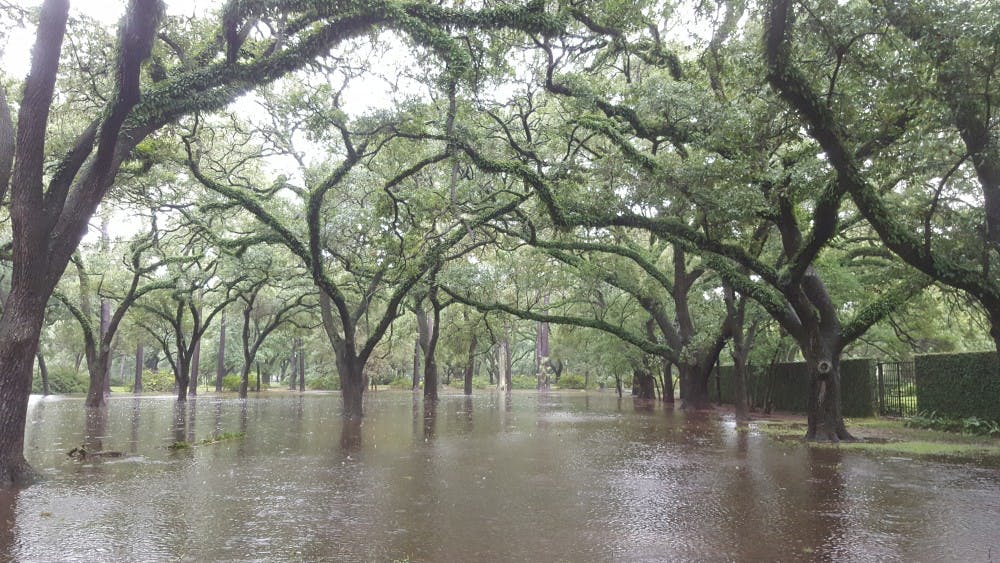 Throughout Hurricane Harvey and its aftermath, Rice campus remained safe due to the preparedness of its facilities and existence of improved city infrastructure, according to Vice President for Administration Kevin Kirby.

With its own power plant, medical service and police force, Rice was better positioned for the storm than most of Houston, Kirby said.

“Rice is like its own little city,” he said. “That has helped us a lot because we have the resources of a city under our control. We're very resilient.”

The crisis management team, which Kirby chairs, runs practice drills for hurricanes and is well-prepared for disasters ranging from violent protests to disease outbreaks to hurricanes, Kirby said. In a high-wind event, for example, the university has on hand precut pieces of wood to fit the windows that are most at risk. At the Shepherd School of Music, a one-of-a-kind organ has its own special protections, which involve roof reinforcements and boards over the upper windows.

“Teams across campus have well-established emergency response plans,” Provost Marie Lynn Miranda said. “So we weren’t having to make stuff up as it arose.”

A portion of staff members from Housing and Dining, as well as Facilities Engineering and Planning, are designated as essential personnel in their contracts, according to Kirby. This designation means they have agreed to remain on or near campus for the duration of any given emergency.

Throughout the storm and aftermath, H&D has had enough staff on hand to keep the four major serveries open, Glenn said.

“Our priority is food, ” Ditman said. “Food is absolutely urgent.”

About one third of H&D’s normal staff — 50 people — have remained on campus since Thursday night, according to Susann Glenn, H&D manager of communications. Five have stayed on campus, spread between the H&D office, North Servery and Seibel Servery, while the rest have doubled up in hotel rooms at the Wyndham Hotel in the medical center.

H&D Associate Vice President Mark Ditman said having six people on campus would allow H&D to unlock the serveries and turn lights on in the event that waters rose enough to make campus inaccessible from the Wyndham. In that case, college magisters and resident associates would cook for students if necessary.

“Water can come up so high so fast that you can’t get from the hotel to campus,” Ditman said.

Sid Richardson College’s magisters, resident associates and some students helped cook for the college from Sunday to Wednesday. Glenn said the intention was to keep students inside during the worst weather rather than have them walk to South Servery, where the staff was originally planning to feed them.

At no point during the storm was Rice in danger of running out of food, Glenn said. H&D has a plan in place to maximize food inventory during natural disasters, involving first eating fresh food, followed by frozen food, and finally non-perishable food.

“If we put this plan in place, we’re looking at three weeks,” she said.

Although H&D’s food suppliers had delivered non-perishables before the storm, securing a resupply of fresh food proved difficult given the shortage in Houston, he said.

“We were competing with everyone else in the world for resupply, ” he said. “But [Senior Business Director] David McDonald was able to pull off resupply. He went to a secondary vendor who is going to supply us out of San Antonio.”

Other tasks, like cleaning the commons and collecting trash from the residential colleges, are less urgent and have not been completed as frequently as usual, Ditman said. Students have organized to clean their own commons, and trash collection has been centralized or performed less often.

Ditman also said custodians from FE&P, who normally clean academic buildings, have been able to help around the colleges.

Despite its unusual duration, Hurricane Harvey has not posed any unforeseen difficulties for campus infrastructure and facilities, Kirby said.

“We’re in good shape and we could even start classes tomorrow if we had people [who were able to get here],” he said.

Some recent infrastructure upgrades have also contributed to the relative lack of flooding on Rice campus, he said.

Kirby said another important measure to prevent flooding is cleaning out storm drains before and during rainfall, as the FE&P team has been doing.

As of Aug. 30, 32 facilities issues had been found and listed on the Rice Emergency Management website, most of which consisted of minor leaks and elevator problems. The basements of several buildings, including Rice Memorial Center, Tudor Fieldhouse and the Oshman Engineering and Design Kitchen experienced minor flooding.

Assistant Vice President for Facilities Bart Salmon said his team has also been inspecting buildings daily, which has led to the discovery of most of the issues with buildings on campus.

Salmon said FE&P attempts to fix identified problems permanently, but this is not always initially possible for the more time-intensive tasks. Accordingly, he said some of the sites and issues will need additional attention after the floods have subsidied.

Beyond weathering the storm, Miranda said campus administration is equally concerned with preparations for the next few weeks.

“It’s important to remember that there are a lot of people who are dealing with devastation in their homes,” she said.

Miranda said the administration has launched two data collection forms to help with long term solutions for the Rice community: a needs assessment form and a match service.

Between its launch on Monday and Wednesday night, the needs assessment form has received 6,600 responses from faculty, staff and off-campus students, she said. The administration is working on a data mashup to estimate the number of missing responses.

Launched Tuesday evening, the match service is an online form that asks people if they need temporary shelter or if they have extra beds to offer members of the Rice community who have been displaced. As of Wednesday night, Rice has been able to find matches for everyone who expressed a need for temporary housing.

“I just love this whole notion of all that strength in information science getting married to our deep desire to service the world,” Miranda said.