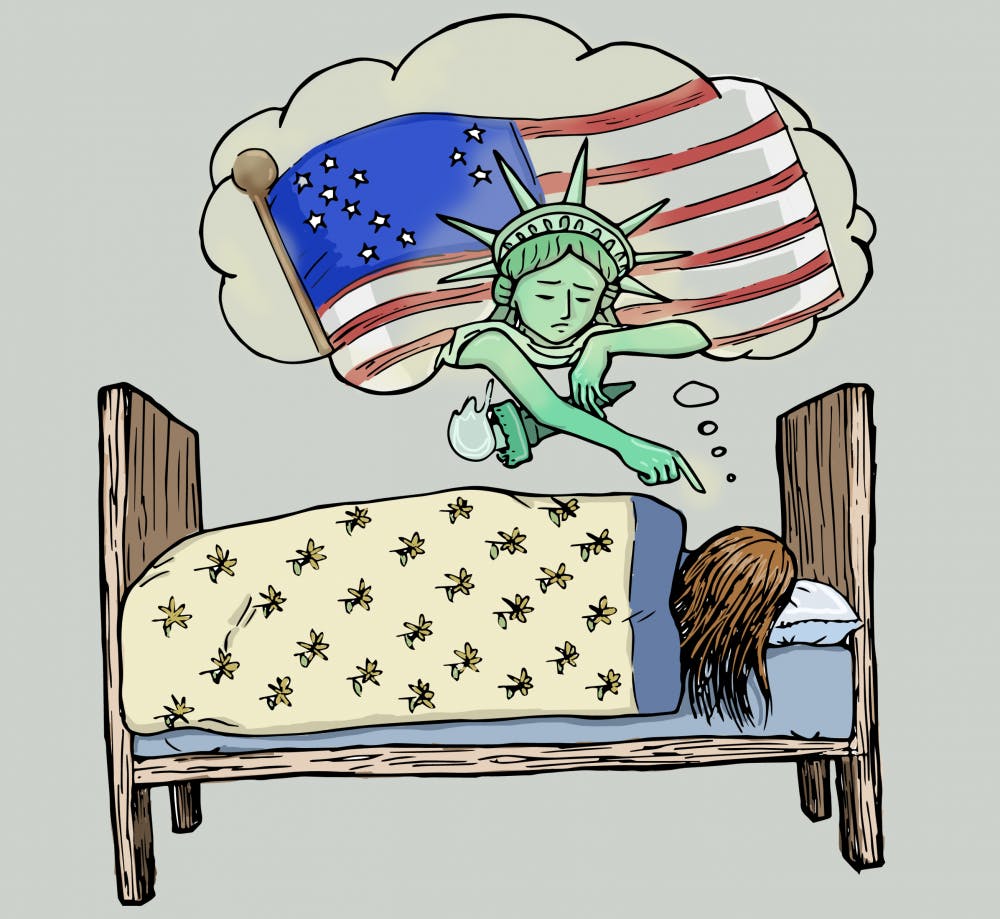 Undocumented students brought out from the shadows by the Deferred Action for Childhood Arrivals Act were thrust into the nation’s spotlight after the Trump administration announced they were phasing out protections on Sept. 5.

Santiago Garcia is one of those students. He came to Texas from Colombia when he was only five, and relies on DACA to remain in the United States. In order to apply for protection, he and every other applicant must provide their immigration status to the government and submit to a thorough background check.

“There was definitely a scare that weekend for everyone, because no one really knew what they were going to decide,” Garcia, a Will Rice College sophomore, said. “They could've ended it right there. Because they know where we are, they know everything about us. They have our names on a list.”

Another DACA recipient, Brown College freshman Rodrigo Andrade, has lived in the United States for over 15 years since his family moved from Peru. He said he is doing what he can to prevent his family from worrying.

“I'm being much more careful,” Andrade said. “I try not to leave campus. I was going to go to Austin with a few of my friends for music as a trip, but after this, it's not really an option anymore.”

Roughly 11 million people were undocumented immigrants as of 2015, according to the Pew Research Center. Of those, 800,000 are under DACA — about 7.3 percent.

Garcia said the anger people feel toward DACA stems from ignorance about the strict requirements of the process.

“A lot of people think that any immigrant can go through and get DACA,” Garcia said. “People believe that we have some path to citizenship, we can apply for financial aid from the government, we’re criminals, that we can get money from the government or that we don’t pay taxes. None of that is true.”

DACA protection lasts two years, although recipients were able to reapply. However, under the recently announced changes, only those whose DACA protection expires before March 5 can reapply before Oct. 5,  but no new applications will be processed, according to documents released by the administration. After these six months, recipients maintain protection only until their DACA expires.

Andrade said his status is expiring in October, so he is reapplying now for a two-year extension. Garcia said he reapplied this summer and is protected until 2019, but his sister's DACA status expires in August of next year. His sister is still in high school and he said their parents hope they can stay until both siblings are in college.

“My parents have always said, it doesn't matter if we get deported as long as y'all are fine, but obviously I don't really like that that much,” Garcia said. “But like with the bill they're planning to pass, there’s a lot of discussion about putting in a provision where you have to out your own parents as being illegal immigrants and allow them to get deported.”

Garcia said some of the rhetoric supporting DACA recipients pushes blame onto their parents.

“They only came here to promote their children's lives, and they've sacrificed a lot and work really shitty jobs at very low wages because they can’t get any better jobs,” Garcia said. “The parents are just doing what a parents supposed to do, sacrificing their own lives for their children to help their lives.”

Alberto Maldonado, president of the Hispanic Association for Cultural Enrichment at Rice, said the issue affects all of Rice despite the small percentage of DACA recipients.

“A lot of people don’t want to risk it,” Garcia said. “Because it’s like tearing your entire life away, all your friends, everything you’ve done, everything you’ve worked for and taking you back to a country that's really unknown to you. And you having to build everything back up again.”

In a letter sent to the Rice community the day of the announcement, President David Leebron wrote that Rice would take any action permissible by law to avoid risking students’ deportation or challenges to their immigration status, as well as advocate for DACA with Congress members.

“Those who were brought to this country as a child are threatened with deportation to countries that they did not grow up in, may have no relationships in, and may not even speak the language,” Leebron wrote. “This ought to be unacceptable to all.”

Leebron additionally addressed the timing of the announcement, given the hurricane devastation of parts of Texas, where 124,000 DACA recipients live, according to the United States Citizenship and Immigration Services. DACA recipients, along with all undocumented immigrants cannot receive help from the Federal Emergency Management Agency, according to their website.

Trump announced on Friday, Sept. 1 that the administration would make a decision on whether or not to end DACA in the coming days.

“That Friday was the scariest part for me, because you usually don’t really think about [getting deported],” Garcia said. “Even when DACA wasn’t here, I wasn’t thinking about the possibility of being deported, but during Friday, it made me realize that I could easily at a very close point in time be deported and have to leave everything behind. So it definitely made me feel better to read that letter.”

Andrade said he was happy Rice publicized Leebron's message. He said he hopes Rice's statements will set a precedent for other institutions.

“When my mom reads statements from Leebron or Rice University, my family feels more comfortable with me here,” Andrade said. “I can figure out other troubles by myself, but I want my family to be comfortable. I know that as long as I'm a Rice student I should probably be fine. It's good to know that Rice is looking out for me.”

In his letter, Leebron wrote that Rice would continue to support DACA students with financial aid. Garcia said that while he appreciates this, he believes it might make the admissions process more selective against DACA recipients.

“Pretty much every DACA student needs full financial aid, since they probably don't come from a high-income family. Otherwise, they'd probably have papers,” Garcia said. “[Rice has] to make an investment in the student when they give financial aid, and if that student is subject to being deported, it can be technically a waste of money.”

However, Rice’s financial aid policy states that the university uses need-blind admission and covers all financial aid needs for all domestic students, which involves both DACA recipients and undocumented students without DACA.

Dreamers looking towards the future

The Trump administration’s announcement came after a group of state attorney generals, including Ken Paxton of Texas, threatened to challenge DACA in court. Trump called on Congress pass a law to address those who rely on the policy in coming months.

“I don't see how DACA would have survived [being sued], because the only issue they would talk about is whether or not they should remove DACA, rather than having a conversation about what to do after that,” Garcia said. “They probably would've removed protections completely and had mass deportations."

Garcia said he and others he knows who receive DACA hope the six month period will push Congress to pass a constitutional version with a path to naturalization, which DACA does not currently have.

“[A] lot of DACA kids aren't super angry about this or scared,” Garcia said. “A lot of people in DACA, including myself, kind of feel like we're in this limbo, allowed to stay and live and work here, but not be an American citizen, not being allowed to leave and come back.”

Maldonado said he is highly skeptical that anything will be done.

“Many bills similar to these acts have run through Congress,” Maldonado said. “Frankly, the immigrant community has very little faith in Trump or in Congress.”

Ricardo Tapia, president of the Rice chapter of the Society of Hispanic Professional Engineers, said DACA supporters can help by sharing their views with their government officials.

“My first concern would be to ensure the stay of such affected people,” Tapia, a Martel College senior, said. “Perhaps there is the possibility to be grandfathered into the old DACA system and be eligible for new programs that lead to legal status.”

“Now is a really critical time to show your support, because the government is supposed to do what we want it to do,” Garcia said. “Having all this support can really help change decisions or force them to change their decisions.”

Editor-in-Chief Drew Keller contributed. The print version of this article misstated the full name of DACA, which is the Deferred Action for Childhood Arrivals Act.