Hit by Harvey: tearing down to build up 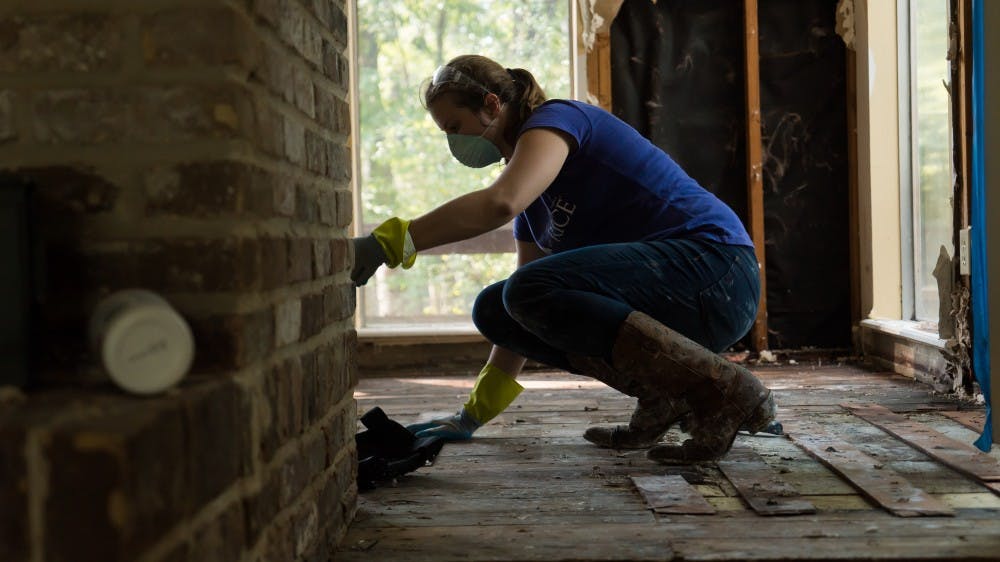 Over 2,000 Rice students have signed up as volunteers through the Rice Harvey Action Team, according to Doerr Institute Director Tom Kolditz.

Students and staff formed R-HAT to connect those in need with volunteer demolition teams that deconstruct damaged houses, Kolditz said.

“Ironically, we had to cancel Outreach Day this past weekend and now we’re doing Outreach Day every day,” Caroline Quenemoen, director of the Center for Civil Leadership, said.

R-HAT’s efforts have ranged from smaller teams of students carpooling to worksites to 200 students riding buses to Crosspoint Church before heading out into local communities.

The majority of R-HAT’s work has been concentrated in Bellaire, Meyerland and the Third Ward as those are the closest to Rice’s campus, Kolditz said. The Doerr Institute is footing the bill for relief efforts which currently amount to a few thousand dollars.

“Although I love the way we at Rice have been taking care of each other and our community, in volunteering with BLMHTX we can also work to support those who need it most,” Jenkins said.

Youssef Machkas, who volunteered as part of a demolition team with BLMHTX, said he was struck by the optimism of the people whose homes were flooded .

“Their houses were basically destroyed but it seemed like they were trying to stay positive,” Machkas, a Sid Richardson College senior, said. “That’s just the vibe I got, like they won’t let it sink them.”

Ranjini Nagaraj helped a sixth grader clean out her bedroom.

“[Her mother] told us that she had hidden many of her daughter’s belongings that had been ruined so that she wouldn’t be upset when the time came to throw them out,” Nagraj, a Jones College junior, said. “I can’t even imagine how I would handle a situation like this if I were in their shoes.”

Carly Frieders volunteered at a house owned by a Rice staff member.

“Almost all of the students I volunteered alongside were not Houston natives,” Frieders, a Brown College sophomore, said. “A lot of them were first-year students who had lived in the city for less than two weeks. And yet, we all came together and took ownership of Houston in a way that I haven’t ever seen Rice students do before.”

Freddy Cavallaro said he was nervous to volunteer at Lakewood Church after seeing the recent press about the church not initially opening its doors to flood victims.

“We worked our asses off,” Cavallaro, a Will Rice junior, said. “I was impressed by the sheer bulk of supplies and people going through after it was open for one day.”

At Lovett College, junior Chloe Wilson said she and sophomore Taylor DeWoody collected toiletries for Housing and Dining staff who stayed on campus during the storm. They also organized 90 volunteers for the night shift at NRG stadium.

“We had so many volunteers that around 15 of them ended up having to go home at around 2 am because there weren’t enough jobs at the shelter,” Wilson said.

On Friday, the SA organized a town hall town hall where students signed thank you posters for groups including RUPD and H&D. Students also discussed ways to keep students volunteering as classes begin.

“The Rice Bubble has been popped and my deepest fear is that it forms again,” SA President Justin Onwenu said.

“A flooded home is a flooded home and so we’re just going to keep working to the best of our ability to put teams into those areas,” Kolditz said.