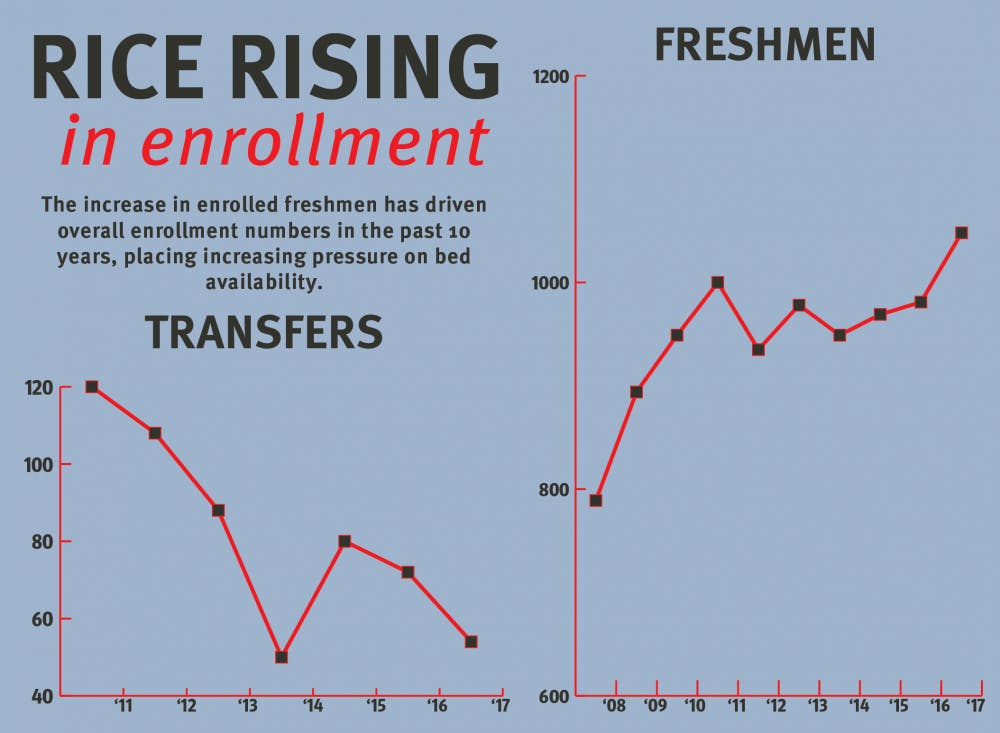 Rice did not find beds for all its new students until the start of Orientation Week due to a higher than expected yield rate for 2018 matriculants, according to Dean of Undergraduates John Hutchinson.

“Rice only has one guarantee in its housing agreement, which is that if you’re a new student and you want housing you are guaranteed housing,” Housing and Dining Senior Business Director David McDonald said. “There is no guarantee for three years on campus.”

Housing and Dining offered returning students a discount of $2,000 off of the $4,745 fall semester room costs on June 16, according to McDonald. However, when bed shortages persisted, Housing and Dining increased the overcrowding incentive to free housing for the fall semester. This offer led to about 40 students choosing to overcrowd, making 17 additional beds available by Aug. 14.

McMurtry College sophomore Marco Gutierrez said he and his roommate agreed to overcrowd under the $2,000 incentive and tried to find three doubles to consolidate into two triples. However, they could not find a third double, even after the incentive increased to free housing.

“I started Facebook messaging almost every male at McMurtry to try to find a candidate,” Gutierrez said. “I must have messaged 50 people before finally I found [someone].”

Rice admits more applicants than there are available beds on campus with the expectation that many will decline the offer of admission. The ideal size for every new class is 955 and the target for enrolled students over the course of the year is 3,800, Hutchinson said.

Of the 2,865 freshman applicants whom Rice accepted this year, 1,048 enrolled at Rice, resulting in a yield rate of 36.6 percent, 1.3 percent higher than the year before. In contrast, Rice also extended 2,865 offers for freshmen entering in fall 2015, but only 969 students accepted the offer, a yield of 33.8 percent.

The transfer yield rate also increased from 50 percent to 56 percent, but the number of transfers enrolled fell by six as Rice extended fewer offers of admission to transfer students, according to data provided by Director of Admission David Warner. The Office of Admission could not be reached for a comment regarding the data at the time of print.

Residential colleges conduct room draw while returning students are still on campus, well before admissions receives data on enrolled new students. This leaves Housing and Dining to estimate the numbers of beds that each college should reserve for new students. In previous years, inaccurate estimations led to too many students being bumped, while this year colleges bumped too few.

“In my opinion, room draw occurs very early and sometimes makes predicting beds to save difficult,” McDonald said. “For most universities, it’s housing that is running the room draw so they can do it as early or as late as they want, but here it’s unique and it’s Rice and we like it that way.”

Hutchinson said he asked the residential colleges to freeze their waitlists for living on campus over the summer after learning of the large incoming class. The freeze came after a much larger number of students were forced to move off campus for this academic year.

At McMurtry College, one of the two largest residential colleges with 314 beds, the wait list currently stands at 20, according to college coordinator Jackie Carrizales. At the start of last year, McMurtry had six to seven students on their waitlist, but they had already made room arrangements, resulting in empty rooms at the college.

One unexpectedly large yield was out-of-state students, increasing percent since last year, from 27 percent to 30 percent, according to Director of Admission Dan Warner. Hutchinson said this shift could be a sign of Rice’s increasing competitiveness with the country’s most prestigious universities.

“One of the things we can say here is the reason our number went up is because students who could have gone to Stanford or Princeton or Harvard or Yale chose to come to Rice,” Hutchinson said. “That’s a good thing, even if it creates an imposition in housing.”

The larger freshman class will cause increased competition for on campus next year though some competition may be relieved by admitting a smaller class of 2022, according to Hutchinson. However, he said it is almost impossible to avoid overadmitting from time to time.

“To my knowledge there is basically no way to fix it, because statistics of relatively small numbers are going to have some error bars resulting in some fluctuations,” Hutchinson said.

The last several times Rice’s yield rate was larger than anticipated, the Office of Admission reduced acceptances for the next years’ classes, according to Hutchinson. When the yield for new freshmen hit a high of 38.5 percent in fall 2011, offers dropped by 72 for the next year. Hutchinson said the Office of Admission will determine the offer number for next year in the next few months.

Hutchinson said the increased yield could have an impact extending beyond just next year.

“If we can project that this is actually a change in what we expect to be our long-term yield, then that will go into the model used by enrollment to decide how many people to admit,” Hutchinson said.

The number of beds on campus could increase with the building of a new Sid Richardson College facility, McDonald said. Sid, currently the smallest college with 220 beds, may be increased to 280 or 290 beds. McDonald said 290 beds is ideal as Lovett College runs efficiently at that size, but further studies into bed numbers would be conducted.

Currently, the ratio of students to beds is about 75 percent, Hutchinson said. In his Vision for the Second Century, President Leebron wrote that even as Rice’s undergraduate population expands, the university’s goal will be to house 80 percent of students on campus.

“We must take great care to ensure the vitality of the college system,” Leebron said.