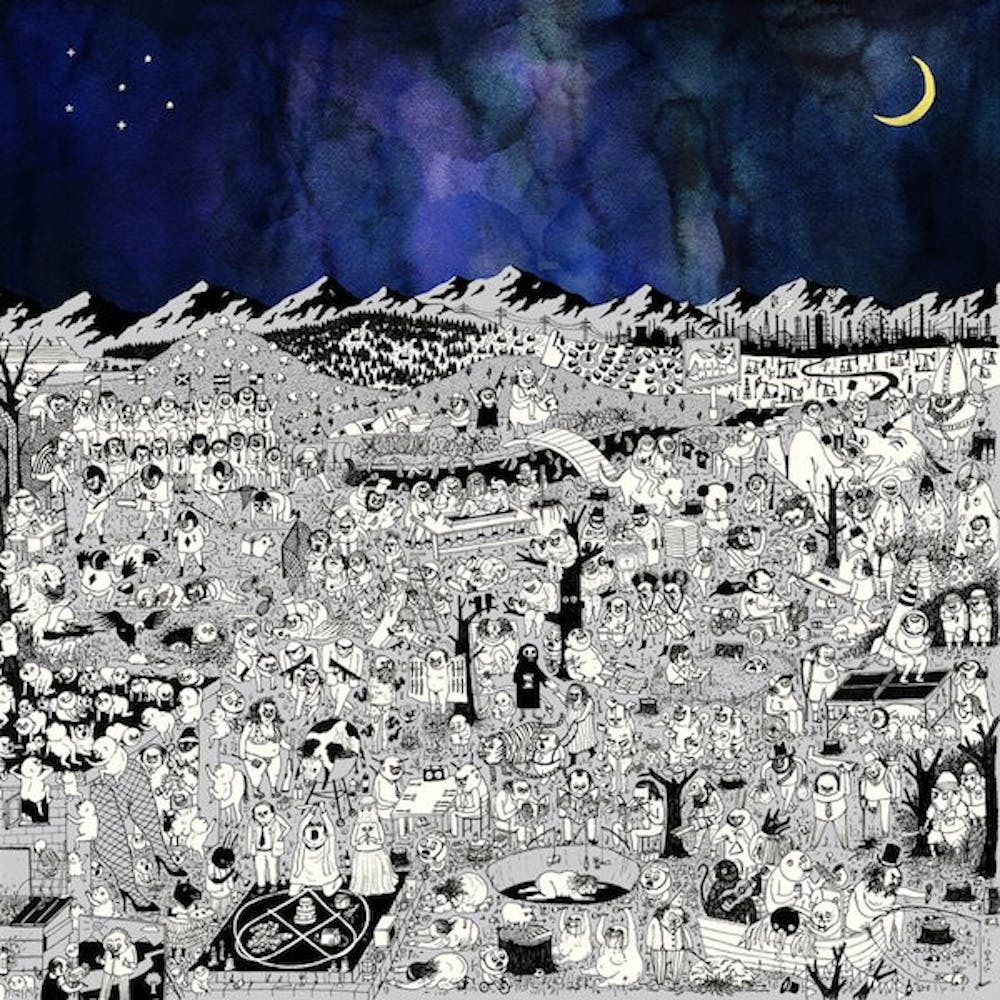 Following up 2015’s sophomore album “I Love You, Honeybear,” Father John Misty’s recent release, “Pure Comedy,” proves that pretentiousness sells. Father John, or Josh Tillman when not in his stage persona, is known for his pedantic diatribes on art, postmodernism and the human race at large. Although “Pure Comedy” at times feels bleak and snobbish, Misty’s lovely arrangements and biting vulnerability make the album a surprisingly enjoyable listen.

The titular track opens “Pure Comedy” with sounds for a commercial or news announcement. This segues into Misty’s sarcastic take on the history of humanity, with lyrics like “The comedy of man starts like this/Our heads are way too big for our mother’s hips.” Although Misty is setting up man’s history as a punchline, his critiques on gender roles, religion and bureaucracy border on offensive. It’s obvious Misty is stepping away from the themes of love and companionship on “I Love You, Honeybear.”

“Total Entertainment Forever” is one of the few higher-tempo tracks on “Pure Comedy,” but it will only be remembered for the shocking opening line “Bedding Taylor Swift/Every night inside the Oculus Rift.” As seen on previous albums, the artist is preoccupied with the ever-increasing dependence on technology. The third track, “Things It Would Have Helpful to Know Before the Revolution,” takes a darkly lighthearted tone on what happens after the apocalypse. Instead of being concerned with survival, Misty laments “My social life is now quite a bit less hectic.”

“Pure Comedy” peaks with middle tracks “Ballad Of the Dying Man” and “Leaving LA.” On the latter, Misty uses a gospel-tinged choir to underscore the viewpoint of a dying, obnoxious, hipster, taking aim at the pretentious, Pitchfork-esque blogs that love to hate him. It’s obvious he is being purposefully repulsive, with lines like “And he had successfully beaten back the rising tide/Of idiots, dilettantes and fools” and “He first checks his newsfeed/To see what he’s about to miss.” Although the lyrics are sarcastic, the easy-going, uplifting acoustic guitar brings warmth to an otherwise cold song.

“Leaving LA” is the magnum opus of “Pure Comedy.” In this 13-minute, introspective journey, Misty appears to take off the arrogant persona. Meditating on his move to New Orleans, he acknowledges that his persona both draws and alienates his listeners. Admitting his failures, his loss of faith and his supposedly unskilled music bring a sobering viewpoint. He recognizes many of his listeners— ”virginal college dudes” — will eventually be turned off by his new music. A darkly funny story about him almost choking to death in a J.C. Penny reveals his first memory of music (Fleetwood Mac was playing) and his realization of his insignificance in the universe. A lush but quiet orchestra adds drama and emotion to the subdued track.

The rest of “Pure Comedy” settles into tonal homogeneity, with understated, mid-tempo tracks like “A Bigger Paper Bag” and “The Memo.” Track “Two Wildly Different Perspectives” underscores his anxieties about a Trump-led U.S. by considering deeply divided political parties. Misty appears overwhelmed with thoughts of growing old, of impending war and of insignificance, but isn’t everyone?

As a college student with great anxiety about the future, “Pure Comedy” shows me those insecurities never fully disappear. Although Misty tries to hide behind a mask of pretentiousness and smug sarcasm, it’s obvious that even the great artist cannot escape feelings of vulnerability. If “I Love You, Honeybear” was the honeymoon phase, “Pure Comedy” is the mid-life crisis.