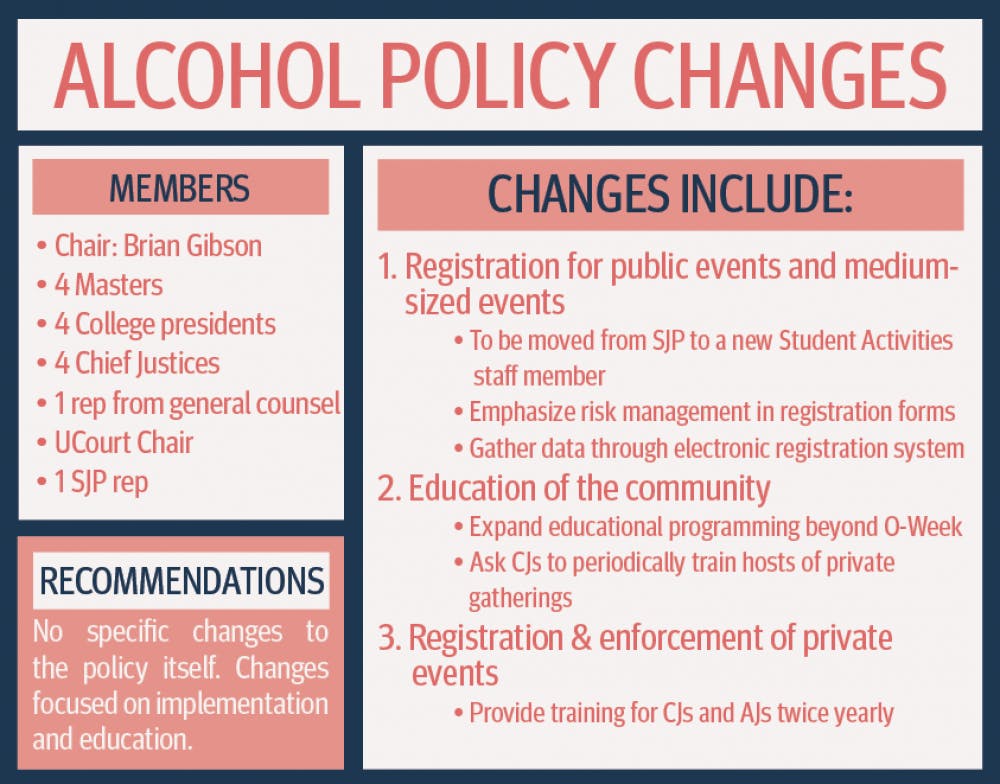 The Alcohol Policy Advisory Committee has released a report with 25 recommendations for the enforcement of Rice’s Alcohol Policy, but did not suggest modifying the policy itself. The recommendations of the committee, which was convened by Dean of Undergraduates John Hutchinson in October, included shifting the event registration process out of Student Judicial Programs, supporting the residential college justice system and adding more education on the policy throughout the year.

This year was the first the committee convened since 2013, when its recommendations resulted in the implementation of the hard alcohol ban and associated policies. Hutchinson said there is evidence that those changes have improved the safety of Rice students.

“The number of people who need medical attention is dramatically lower, multiples lower, than it was before the hard alcohol ban,” Hutchinson said. “I’m talking about hundreds of percent changes.”

Hutchinson declined to release exact numbers because he said success of the hard alcohol policy should not be based on one metric. He also said he did not want to discourage EMS calls, which he said were critical to student safety, and pointed out that another way to get a reduction in medical calls would be less students calling EMS when they should.

Eight of the committee’s recommendations suggested improvements to the registration process for public and medium-sized events. Another eight recommendations deal with the registration and enforcement of private events, largely focusing on the need for effective chief justices and expansion of the associate justice program at residential colleges, and nine of the recommendations related to expanding student education on the Alcohol Policy, especially after Orientation Week.

Hutchinson said he planned to add a student activities staff member with training in student life risk management whose primary responsibility would be to work with students to create risk management plans for events.

According to Hutchinson, SJP approved around 450 events last year, so moving event approval to a student activities staff member will remove a large workload from SJP and allow it to focus fully on adjudication and disciplinary matters. He said the rules for event approval will remain the same, but the change will improve the approval process and increase administration responsivity to students.

“I think there is more of an issue of people not cooperating with CJs rather than with CJs not doing their jobs,” Hutchinson said. “There is strong leadership among CJs but the community needs to participate in the process.”

“One of the first discussions we had as a committee was about the inconsistencies in how college courts operated college by college, and how courts even operated year to year,” Venkateswar, a senior, said. “This led to differences in enforcement and caused students to be frustrated by their interactions with both the college and administration’s judicial system.”

However, former Will Rice College CJ Aakash Shah, who also served on APAC, said he was not certain more consistent enforcement would actually help students.

“I understand why people think it makes sense to train all CJs to enforce the alcohol policy the same way, but I’m unsure if this will add any real benefit in terms of student safety and well-being,” Shah, a senior, said. “I found the role of CJ to be more about building relationships with upperclassmen who can be on your side and set good examples, and about prioritizing punishing behavior that puts students in danger. I found that if minor violations were consistently punished, students would lose trust and faith in the CJ, and would be less open about when and what they were doing.”

Shah said he felt strict alcohol policy enforcement should not be a priority.

“I think we’re overall no better or worse than we’ve been since I’ve been at Rice and since the hard alcohol policy has been implemented,” he said. “As a CJ, I’ve always been more concerned with student safety than with strict enforcement of the alcohol policy, and so I generally let things slide so long as students were taking care of each other and not putting anyone in danger.”

Sid Richardson College President Griffin Palmer, who was a member of the committee while serving as CJ, said he did not expect the new recommendations would represent a major change to the CJ role and responsibilities.

“I don’t think that the CJ role will necessarily change an extreme amount since they still have the same purpose, but for the next year or two the CJs may need to be slightly more active to help to create these extra educational protocols,” Palmer, a junior said. “Their sole purpose of enforcing the alcohol policy while helping to keep students safe and serving as a resource will remain the same.

In addition to its recommendations about college courts, the committee called for a single, consistent set of sanctions for violations of the private gathering rules, while preserving some SJP and college master discretion in student punishment.

Hutchinson said the alcohol policy is currently only explained during and just after O-Week.

“Education during O-Week is definitely insufficient. I think it’s because the education that comes during O-Week is out of context,” Hutchinson said. “The new students haven’t lived here, they haven’t experienced members of the college having a gathering, or they haven’t attended a large public event like the Texas Party.”

Palmer agreed with the need for continued education.

“The majority of the issues with education that we encountered weren’t actually with the education of the CJ,” Palmer said. “It was that most of the general population doesn’t seem to know the alcohol policy well. The policy is presented by each CJ during O-Week and then isn’t really visited again for the entire year. Since O-Week can often be information overload, it can be easy to forget pieces of the policy over time.”

In order to provide a more understandable presentation of the alcohol policy, the committee recommended using case abstracts, which could be based on real disciplinary incidents, in order to demonstrate to students the consequences of not following the policy.

The committee was chaired by Associate Dean of Undergraduates Brian Gibson and has now adjourned until Hutchinson decides to call it again. According to Gibson, it consisted of four college masters, advisors from general council and SJP, and nine student representatives: college presidents, chief justices and the chair of University Court. Venkateswar, Palmer and Shah all said the committee was receptive to student suggestions and the administration was communicative throughout the process.

However, Shah said he was unsure whether all of the committee’s recommendations would be carried out by the administration.

Hutchinson said the administration wants students to think of hosting events with alcohol in terms of risk management, and that the committee’s new recommendations continue a move in that direction that began with the codification of the alcohol policy over a decade ago.

“The goal is to make sure people are thinking through what might happen during an event and how to prevent those things from happening so everyone will be safe and well at the end of the evening,” Hutchinson said. “That’s a different approach than telling people, ‘These are the rules,’ and instead replacing that with ‘Here are the things you need to be thinking about.’”

The host of any gathering has the responsibility of making sure attendees are safe, Hutchinson said, emphasizing that this expectation applies to adults and organizations outside of Rice as well. He said the point of the event registration process is to allow residential college leadership and campus authorities to play their proper role in keeping events safe.