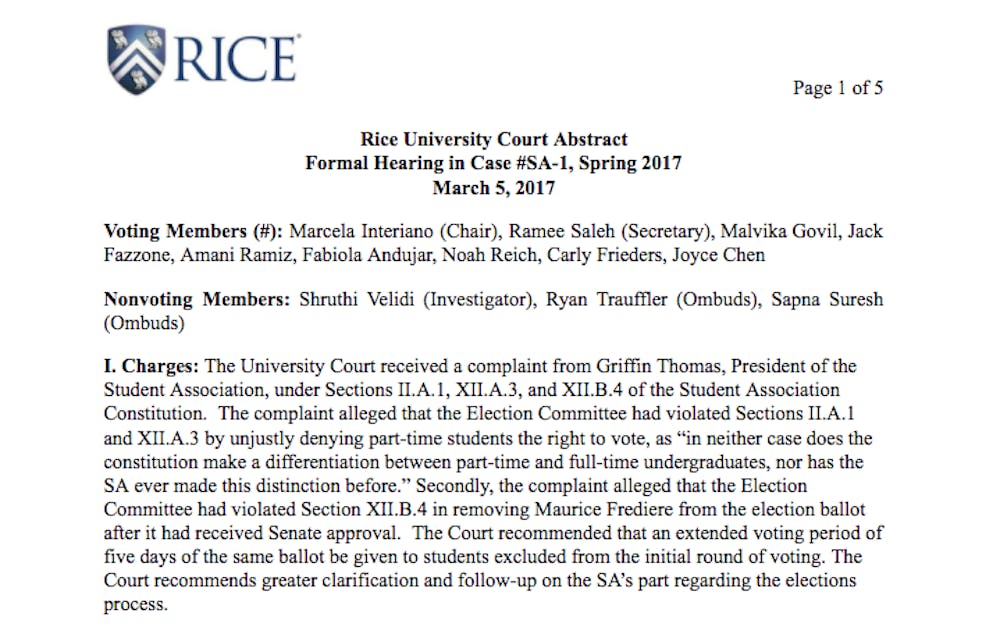 University Court announced at the Student Association Senate meeting Monday night that the election for SA president would be extended five more days for those part-time students who did not originally receive a ballot.

UCourt found the Elections Committee in violation of the SA constitution for removing former presidential candidate Maurice Frediere from the ballot and for preventing some part-time students from voting. SA President Griffin Thomas filed a complaint to UCourt on Feb. 28, after which Director of Elections Taylan Tuncata resigned.

“Our ruling was essentially that the same ballot that has been sent out will be issued to the students who were excluded for five days,” Interiano, a Lovett College senior, said. “[We] wanted to make sure the election process happened — it would take its course as naturally as it could given the circumstances.”

“We were as thorough as possible in our investigation and at no point did this concern really come up,” Interiano said. “We focused more, as much as we could, on just keeping the election on course. Even though this was a concern, it didn’t play a huge role in our decision.”

In her announcement to the Senate, Interiano said UCourt tried to avoid politicizing the decision.

“I wanted to make sure that the court wasn’t focusing too much on how the decision would necessarily impact the political climate on campus,” Interiano said. “I wanted to stay as true as possible as to what was Constitutional and what we could do to best preserve the election as it stands.”

UCourt member Jake Nyquist, an SA presidential candidate, recused himself from the case. Another member, Makenzie Drukker, also recused herself from the case because she said she had been a strong public supporter of Nyquist.

“I didn’t want my presence to contribute to any idea that UCourt’s ruling was biased,” Drukker, a McMurtry senior, said. “It was a decision I took some time to make, so it doesn’t surprise or bother me that other active supporters of candidates didn’t recuse themselves.”

Ramee Saleh, a UCourt member and self-described supporter of presidential candidate Justin Onwenu, did not recuse herself from the proceedings.

“In no way did the Court, myself included, consider the effects of our decision on any individual candidate’s campaign or on the outcome of the election past being the least disruptive to the integrity of the elections period already underway,” Saleh, a Sid Richardson College sophomore, said.

UCourt member Emily Abdow also recused herself from the case due to her position on the Thresher’s editorial board.

During the UCourt hearing, SA Secretary Sonal Pai said she and Tuncata decided to exclude part-time students after a conversation with Associate Director of Student Activities Kristen Ernst and the Office of Institutional Effectiveness.

“We were under the assumption that we could decide which group of people got to vote,” Pai, a Hanszen College sophomore, said. “I remember this conversation about how we didn’t think part-time students were involved in the Rice community. We didn’t consult with anyone, just went through the decision from that conversation.”

According to the UCourt evidence packet, Tuncata, a Hanszen freshman, met once with the previous Director of Elections Brianna Singh, but did not consult with her again after this year’s change in voting system from Owlection to Qualtrics.

Thomas said historically, the Elections Committee had not been given a choice of whom to include in the voting rolls.

“From my understanding from talking to a number of previous directors of elections over the past week since this issue arose, they would take a list of undergraduate students and never fully presented with a full litany of options [like] this time,” Thomas said.

Removal of Frediere from the ballot

The Elections Committee removed Frediere from the ballot after he announced via Facebook video that he was exiting the race. However, according to the SA constitution, the Senate must approve any changes to the ballot. Section XII.B.4 of the constitution states that “The director of elections shall present the ballot for each election, including a list of all candidates for each position.”

Tuncata said that he was not aware that it was unconstitutional to make any changes to the ballot after it was approved by Senate.

“From [the time of Frediere’s announcement], maybe just the next day, I just shot [Pai] a text that just said, listen, what should we do about this? Should we take him off the ballot, and she said, yeah, I think that makes sense,” Tuncata said. “And then on that Monday the ballot was released without Senate approval.”

Ernst said she received a text from Pai the day prior to the ballot being released saying that she and Tuncata had decided to remove Frediere from the ballot.

“I asked if it was [unconstitutional] and at the time they thought it wasn’t an issue,” Ernst said.

Thomas said that soon after the ballot was released, he noticed Frediere had been removed and was alerted by several college presidents that part-time students hadn’t received a ballot.

“I’m most concerned with making sure that those who are members of the Student Association have the opportunity to vote,” Thomas said.

UCourt asked Thomas whether he was seeking an extension or invalidation of the election, and he said he was indifferent.

“Whatever you think is most fair and gets us the best results,” Thomas said.