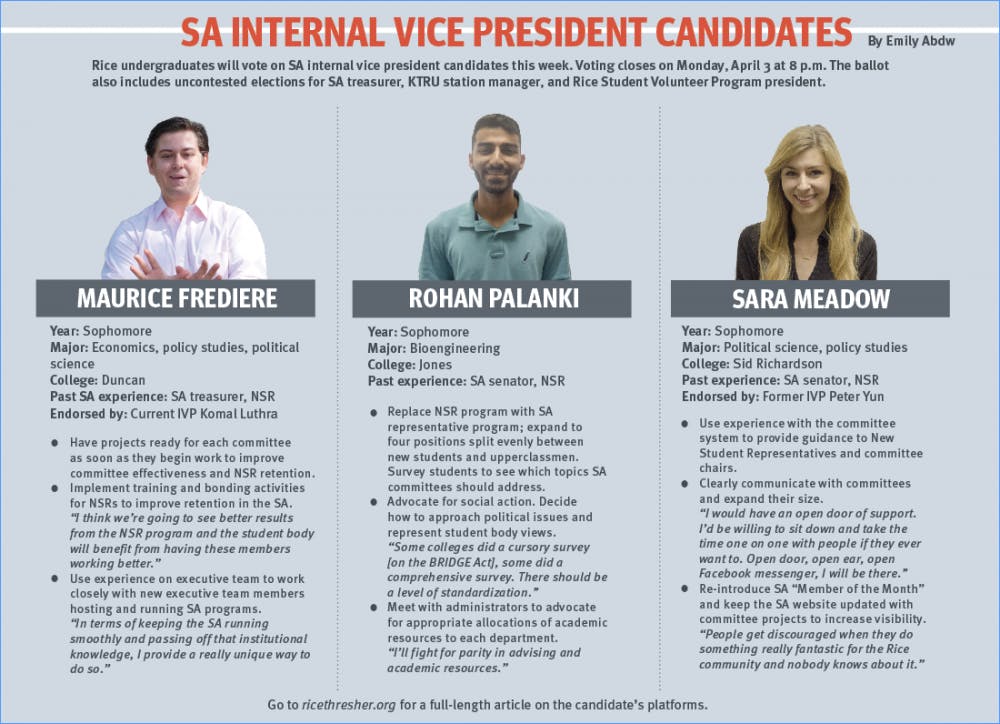 Meadow, a sophomore, said she ran in the second round election due to the position’s associated time commitment, which made her unsure whether she should run for the position at first. She said she ultimately decided she could take a lesser course load to make time for the IVP role.

Palanki, a sophomore, is running for SA IVP after losing the race for IVP at Jones.

“I bleed purple and shouted JIBA from the top of my lungs and my dream was to serve in my own community’s government,” Palanki said. “It didn’t work out and that’s perfectly fine, that’s how elections work. I’m excited I now have this opportunity to not only represent my college but all the colleges.”

Frediere is running after dropping out of the race for SA president and endorsing eventual winner Justin Onwenu.

“The main consideration is how I can best serve the student body,” Frediere, a Duncan College sophomore, said. “I felt I could contribute more to the long-term efficacy of the SA stepping into this position and overseeing the committees. The IVP oversees about 60 members of the SA in total, so it’s a really massive organizational role. Especially with my experience, being able to empower the members of the SA, students who are really passionate and very talented, is going to lead me to effect the most change on campus.”

Meadow said her plans for working with committees included clear communication and expanding the size of individual committees.

“I would have an open door of support,” Meadow said. “I would always be there to answer a question. I'd be willing to sit down and take the time one on one with people if they ever want to. Open door, open ear, open Facebook messenger, I will be there.”

Palanki said in addition to hold committee heads accountable, he would use surveys to introduce SA committees that address student needs.

“The current system is shaped by historical precedence, but what should be important is that student input should be used to shape the committees themselves,” Palanki said. “Maybe students wanted to see a task force about the Wi-Fi but didn’t have the means to do so.”

Frediere said his plans for working with committees will be shaped by his experience in the SA, having served on the executive team for the last year.

Meadow said she would work to provide ideas to new student representatives and encourage committee chairs to act as mentors.

“[There’s] a lot of variance on committees,” Meadow said. “As IVP, I would make sure they’re standardized. This wouldn’t just be coming up with ideas, it would involve a lot of education about what has been done so far: If a student wants to do something with food waste, they should know about past work.”

“NSRs are really young and they make the majority of the population,” Palanki said. “The idea is you have four representatives who can not only spread SA knowledge to the rest of campus but also work on projects together and that could be really valuable to a new student.”

Frediere said one of the problems the SA currently faces is the fact that half of new student representatives tend to leave the organization at the end of their terms, rather than staying involved in SA projects.

He put forward two main ideas to improve the NSR program: making it more enjoyable by hosting events such as dinners and movies and making it possible for NSRs to begin projects they are interested immediately upon the start of the year. He also said he would create more training sessions to prepare NSRs for work in the SA.

Meadow said as IVP she would maintain a list of current and past committee projects on the SA website in order to increase transparency and accountability. She also said she would reintroduce the SA Member of the Month initiative.

“People get discouraged when they do something really fantastic for the Rice community and nobody knows about it,” Meadow said.

Palanki said he would explore alternate ways of publicizing the SA.

“One can always post things on the website and things like that, but if it’s on the website, who’s going to look at it,” Palanki said. “If ‘Rice Memes for Coddled Tweens’ can get 1,900 likes, I’m pretty sure something with the SA that is especially funny can actually do something to at least alleviate the concerns with the SA and show that the SA are people.”

Frediere said he wants to bring back a publically available online SA achievements document, but that the IVP’s main focus should be ensure effective SA internal function.

“While visibility is of course very important, it's outside the IVP's job description and is more incumbent on the President, EVP and college representatives,” Frediere said.

What sets each candidate apart

Palanki said he also sees himself as the most ambitious candidate and brings specific plans for change. His platform includes working to foster inclusive political discussions and providing equal academic opportunities for all academic disciplines.

“I think my drive and ambition [allows me] to see things that are more meaningful than maybe small changes,” Palanki said. “I think something like updating the website is not going to change the SA in the big picture — it’s nice, it could be done, but thats not change. It all goes back to the reason why I ran — making the SA represent the students.”

Meadow said she is set apart by her passion and the thought she has put into the IVP position. Meadow also said she has been endorsed by former IVP Peter Yun.

“I sat down with committee chairs, I sat down with the two previous IVPs who are still here at Rice to talk to them about their roles, the challenges they face and areas for improvement,” Meadow said.

Frediere said he sees his previous experience as treasurer as a differentiating factor from the other two candidates’ Senate experience. According to Frediere, treasurer is a more internally focused role, like IVP. In contrast, he said senators fill a more outward-focused advocacy role. He also said he has been endorsed by current IVP Komal Luthra, and developed his platform after extensive discussions with her.

“It’s one that’s going to be relatively straightforward to implement,” Frediere said. “I think I can see steps to do so right away.”

Voting began at 8 p.m. on Monday and will continue until next Monday, Apr. 3.