Voting opens for Nyquist and Onwenu, Frediere drops out of race after debate 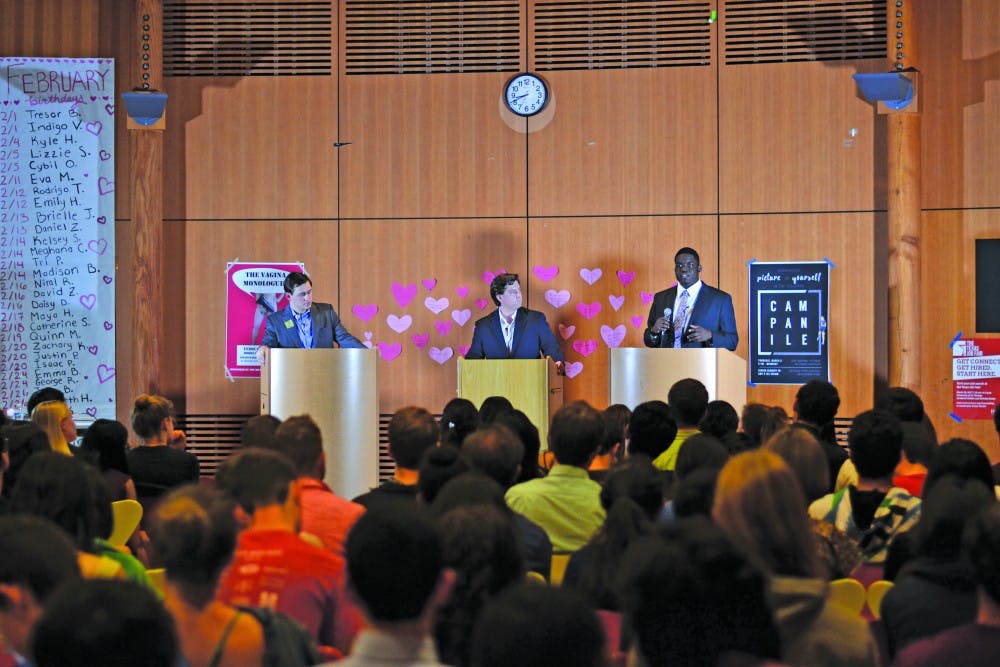 As Rice undergraduates began voting for a new Student Association president, candidates Jake Nyquist and Justin Onwenu continued ramping up their campaigning on campus and social media. Both individuals, along with former candidate Maurice Frediere, defended their platforms at a Friday night debate hosted by the Thresher. Frediere dropped out of the race on Saturday and endorsed Onwenu’s campaign.

Electronic voting in the race began 8 p.m. on Monday and will be open for one week, until the evening of March 6. The results of the election, which also includes voting on SA external vice president, the new SA constitution and several uncontested races, will be released the next day.

Frediere, a Duncan College sophomore and current SA treasurer, posted a video to Facebook on Saturday evening, less than 24 hours after the end of Friday’s debate, in which he said he did not see a “path to victory” for his campaign. Frediere said some of Nyquist’s platform points, such as his proposals regarding Student Judicial Programs, are unrealistic.

“I am concerned about the potential of an SA president making promises he cannot keep,” Frediere said in the video. “That’s why today, I’m endorsing [Onwenu], who has been one of the most consistent and firm advocates for students over the past few years. I respect [Nyquist] and [Onwenu], but I’ve actually seen the work [Onwenu] has done to improve Rice.”

Onwenu, a Sid Richardson College junior and former SA senator, said he met with Frediere right before he released his endorsement.

“I'm definitely really humbled to have his support,” Onwenu said. “However, I know this race is not over and I plan to make sure every Rice student know how hard I'm willing to work on their behalf!”

Nyquist, a Will Rice College junior, said he was unsure why Frediere would say he lacks experience, pointing out that he was active as a former senator and in roles on the Committee for the Undergraduate Curriculum and University Court.

“[Frediere] has had a strong career in the SA and I was excited to see him in the race,” Nyquist said. “I am somewhat disappointed that he has decided to endorse Justin, who has a wide variety of policies that are kind of the opposite of innovative, are more of the same of what we’re seeing from the SA. It’s true that not everything the SA tries is going to work 100 percent of the time, but that doesn’t mean we shouldn’t try.”

At the Friday night debate, the candidates answered questions from both the audience and the moderators, Thresher Editor-in-Chief Yasna Haghdoost and News Editor Drew Keller.

One point of Nyquist’s platform is his support for reducing disciplinary fines and allowing ombudspeople into SJP proceedings. Nyquist clarified during the debate that due to confidentiality issues, the ombudspeople would be staff members, not students. According to Nyquist, these staff members would serve a third-party role, separate from the individuals involved in questioning the student, and provide guidance on the judicial process.

“The reality is, when you’re referred to the SJP, a lot of students are a little bit afraid, a little confused about the process,” Nyquist said at the debate. “I know because I’m on U-Court and I’ve seen it. At the end of the day, why don’t we just provide them with the guidance that they need to not be confused in this process, so they’re no longer afraid and it will make it easier for both SJP and students.”

Onwenu said in his campaign statement that he plans on reforming the SA structure to have more opportunities for students involvement. During the debate he suggested a constitutional amendment or a bill to increase the amount of student roles.

Frediere focused on excellence in undergraduate teaching during his campaign. He proposed to refer professors to the Center for Teaching Excellence based on course evaluations. However, Frediere said he recognized his proposal would not be binding without first passing the SA and faculty senates, and that a similar measure has failed before.

Although sexual assault prevention on campus is not in Nyquist’s official platform, during the debate, he said it is one of the most important issues the SA faces. In the past, Nyquist co-sponsored legislation establishing the Students Transforming Rice into a Violence-Free Environment program aimed at preventing sexual assault.

“Sexual assault is an issue that I care about a lot and have a great track record of discussing in the SA,” Nyquist said. “However, I chose not to include it as a specific platform point because I believe that it is most important that the SA devote resources first to improving our existing programs [STRIVE and Critical Thinking in Sexuality] before we add new initiatives.”

If elected, Nyquist said he would focus on improving already existing initiatives as opposed to creating new ones.

“If we start creating more [initiatives] that deal with sexual assault and these types of issues on our campus, they will become less and less effective for each one we add,” Nyquist said. “So what I would like to do is strengthen our existing programs by working with strive liaisons and integrate more of [the sexual assault prevention] content into RHA training and making sure the visibility of the CTIS working group is more widespread.”

Onwenu said he would focus on discussions about the progress and effectiveness of the CTIS course.

“I think we need to bring up dialogue again,” Onwenu said. “When we do that, it starts the conversation again, not necessarily [adds] new initiatives, but strengthens the initiatives we have.”

Onwenu also said he wants to create a document to consolidate the different initiatives for students’ comprehension.

Frediere said he served on the well-being committee, which addressed sexual assault, as a New Student Representative last year. Frediere’s campaign advocated for the use of security cameras in public spaces to deter criminal activity.

The role of the SA in politics

A recent topic of debate in the Student Association Senate is the SA’s role in addressing national political issues and the BRIDGE Act in particular, which proposed legislative action that would write Deferred Action for Childhood Arrivals protections for undocumented students into law.

Onwenu said he would not act unilaterally on political matters and stressed the importance of Rice’s role in protecting all students, regardless of background.

“Whether it be deportation or income status or healthcare, if it risks your chances of being here and decreases your likelihood of finding success, Rice has an obligation to protect you, but I would be careful about pushing any particular political agenda,” Onwenu said.

Frediere, who is also the Rice Democrats president, acknowledged concerns about the SA taking partisan stances.

“I understand the concern about politicizing the SA and I will never act unilaterally,” Frediere said. “When a student says, ‘this bill will have a direct impact on my life and affect my ability to live or feel safe on this campus, then yes, we will address the Senate.’”

Nyquist said he would focus on gathering reliable data on student opinion. According to Nyquist, the current survey system is flawed because it provides results based on surveys which differ between the residential colleges.

“If we fix this [surveying] problem we can make sure that every time that we discuss any legislation in the SA including the ones we're talking about, we're making an informed decision that's backed up by the students," Nyquist said.

This article was updated to reflect the fact that Thomas rescinded his endorsement of Onwenu, which occurred after publication following Todd's entry into the race.