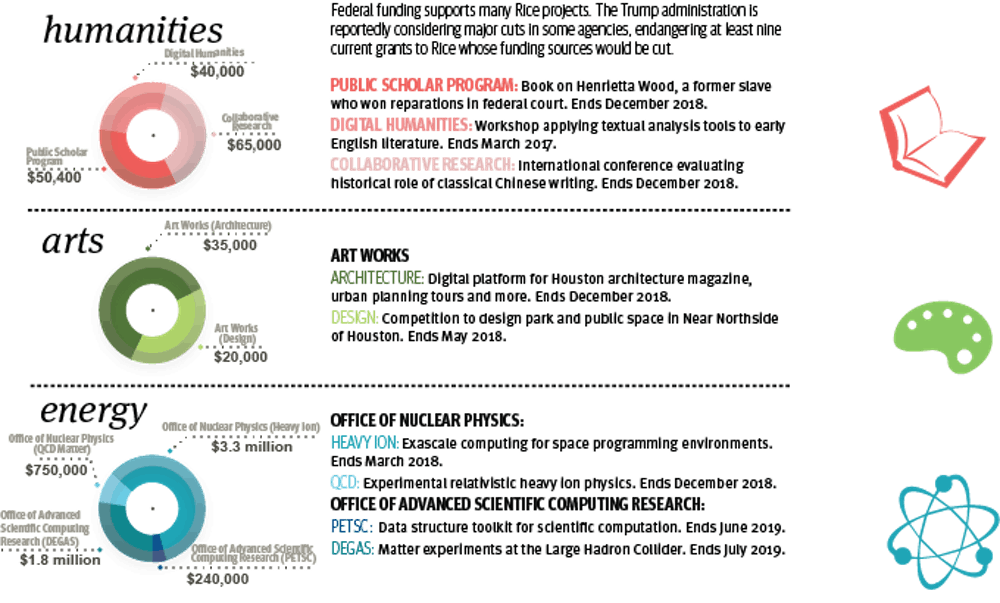 President Donald Trump’s pledge to trim the federal deficit could affect research at Rice. According to The Hill, Trump’s budget team has proposed cutting funding entirely for the National Endowment for the Humanities and the National Endowment for the Arts, as well as reducing funding for the Department of Energy to 2008 levels. The administration has not yet released an official budget outline.

Currently, there are three Rice projects using over $150,000 of NEH grants, according to Lisa Spiro, the executive director of digital scholarship services at Fondren Library.

Two Rice projects currently receive funds from the NEA. According to Executive Director Alison Weaver, the Moody Center does not currently have any public sector funding but is interested in applying for NEA funding in the future.

“Over the last several years, there has been a significant reduction in the number of academics funded by ASCR and all [researchers] have been struggling with uncertainty and funding gaps,” Mellor-Crummey said.

History professor Caleb McDaniel was awarded an NEH grant for his book on Henrietta Wood, an African-American woman who was re-enslaved after being freed and subsequently sued her kidnappers. He said that while there are other funding sources available for book grants, humanities funding is often more difficult to come by than science funding.

Nowadays, most arts organizations, including the Moody Center, focus on raising funds from foundations and private individuals rather than government grants, Weaver said. However, the NEA often awards grants for projects that might not appeal to private donors. In her last job at the Guggenheim Museum, Weaver received an NEA grant for cataloguing and digitizing the museum’s collection.

“That’s the kind of funding that’s really hard to get from a donor because it’s not an exciting, public-facing project,” Weaver said. “But it’s really important to take care of our collection.”

“It’s hard to put a number on [the value of the NEH] because it’s so much more than the individual grants [that it awards],” McDaniel said. “All those resources I’ve used in my research and teaching would be under threat as well.”

Since he relies on digitized source in both his book research and his teaching, McDaniel said there are many layers of dependence on NEH funding.

Spiro said NEH grants have more influence than other funding sources, often raising the prestige of a project and attracting more private funding. These grants also provide a foundation for collaboration, facilitating international research and funding a conference that led to the development of new standards for digital humanities.

The NEA and the NEH make up less than 0.02 percent of the federal budget, according to the Washington Post.

With many NEH grants, private spending ends up contributing three times as much as government spending, Spiro said.

“It’s a tiny budget in the grand scheme of things, but it can have a much larger economic impact,” Spiro said.

“These are really prestigious grants, so if you receive NEA or NEH funding…your program is deemed worthy and that’s an important symbol to your local community,” Weaver said.

Spiro said she has evaluated NEH grant proposals six or seven times and the experience has only increased her respect for the NEH.

“It’s a really well-run agency,” Spiro said. “They have a thorough and fair peer review process, and every application gets a fair hearing. It’s worth Americans paying a little bit more than a postage stamp per person.”

NEH and NEA spending is perennially on the chopping block, McDaniel said. Nevertheless, he said he believes that the NEH has enough allies in Congress to prevent a budget proposal that would cut them entirely.

Weaver said that cutting the NEA would affect all arts organizations, regardless of whether or not they receive NEA funding.

“It’s a shift in the national consciousness for the government to send a signal that it doesn’t value the arts,” Weaver said. “It’s really not a lot of funding overall, but it’s symbolically really important to indicate that the United States values the arts.”

Artists and museum directors plan around NEA grants, and knowing that they are not available changes how organizations plan and fundraise, creating an atmosphere of uncertainty, Weaver said.

According Benjamin Brochstein, a researcher at the Humanities Research Center who received an NEH grant for his work on computer analysis of early English literature, NEH grants are vetted by panels of experts to ensure that the projects are relevant and worthwhile.

“Cutting NEH funding would sacrifice valuable scholarship on an altar of anti-intellectualism,” Brochstein said. “It would be a sad day for the pursuit of knowledge, and a sad commentary on our society."