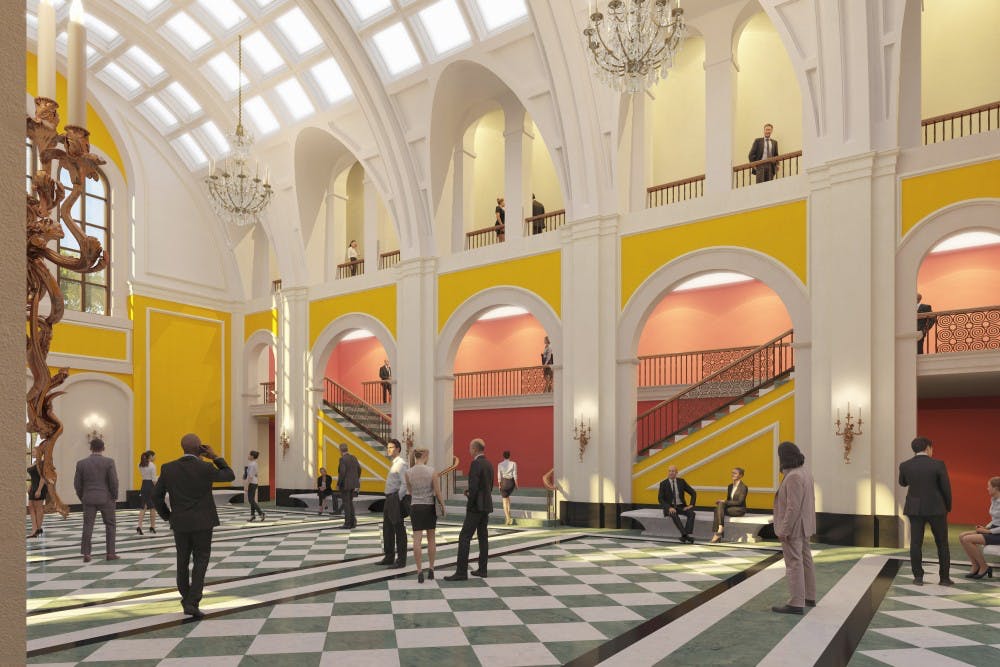 Rice University and the Shepherd School of Music are set to open a new music and opera building in July 2020. Together with Alice Pratt Brown Hall and a connecting plaza, the three will constitute the Music and Performing Arts Center.

According to an article in the Houston Business Journal, Rice announced in April 2014 that the project was tentatively set for late spring or early summer 2015 with the project wrapping up in the summer of 2018. After a 10-month interview process, New York-based design studio Diller Scofidio + Renfro was originally selected to be the architect for the building, with Rice alumnus Charles Renfro (Will Rice ’87) serving as the lead architect.

However, the design plans were then delayed, as Rice chose to exclude underground parking from the plans due to its high costs, and the project switched architects. After Diller Scofidio + Renfro completed the predesign stage, Allan Greenberg Architect LLC took over the design of the new building. As soon as the funding initiative was completed in December 2016, Rice announced that the final designs will be available in mid-March, while construction would officially start in September 2017 and the opening would occur in July 2020. The project is currently on schedule.

Robert Yekovich, the dean of the Shepherd School of Music, said the idea for a new music building originated over a decade ago.

“We knew that our current building, Alice Pratt Brown Hall, was over subscribed with shortages in student practice rooms, faculty studios and rehearsal spaces,” Yekovich said. “Our small black box theater for opera was not ideal for the program we hoped to grow.”

Houston Business Journal reported the entire cost of the music and opera building, approximately $100 million, is being raised through private philanthropy. According to Yekovich, Rice has hit the 90 percent mark in the completion of that goal.

Yekovich said the music and opera building will serve many purposes.

“The new building is especially important and of great significance to the larger university,” Yekovich said. The theater will serve as an acoustical space for chamber music ensembles, something which there currently is not room for. It will also be used for the President’s Lecture Series and as a venue for VIP speakers who visit Rice, according to Yekovich.

Yekovich also said the theater department in the School of Humanities will be able to access both the new theatre and the new auxiliary spaces, such as the scene shop, for theatre courses. Art organizations outside of Rice will also be able to use spaces in the new building for various cultural offerings.

According to Rice University News and Media, the 84,000 square feet building is modeled on European-style opera theaters with three tiers, 600 seats, and an orchestra pit for 70 musicians.

Opera studies major Georgia Belmont said the new building will provide a space for students enrolled in Shepherd School of Music’s opera studies program. Belmont also said that while the program only enrolls 36 singers per year, this selectivity allows for more individualized attention and significant opportunities to perform.

“Having a separate little place for all the opera students is going to be so beneficial because it’s a place to go and just be surrounded by singers,” Belmont, a Martel College freshman, said. “Right now it’s so difficult to find a place to practice when you may only have an hour period, and with this new building the singers will have their own space filled with practice rooms for us alone.”

“I think that the new building is going to be great for Shepherd,” Lyon, a Brown College sophomore, said. “It’ll be nice to have a separate space for singers where we can cultivate our craft.”

The team of firms responsible for this project consists of Allan Greenberg Architect LLC, which will lead the designs of the new structure, Fisher Dachs Associates, which will handle the theater design, and Threshold Acoustics, which will provide acoustic direction.

Allan Greenberg Architect LLC, based in New York and Virginia, also designed Rice’s Humanities building. Threshold Acoustics is based in Chicago and has worked with art organizations including the John F. Kennedy Center for the Performing Arts in Washington. Joshua Dachs of Fisher Dachs Associates, a New-York-based performance arts design firm, will be handling the theater design. The firm has most notably worked on Bass Hall in Fort Worth and the Mariinsky II Opera House in St. Petersburg.

“It’s a great privilege to be involved in this unique project,” Matt Brogan, the project manager from Fisher Dachs Associates, said. “It will set Rice apart from many top programs.”

Several architecture students said they considered the designs of the new building to be too traditional.

“While the building conforms to Rice’s traditional aesthetic, I hoped that an innovative firm like DS + R would break this architectural language for the sake of design,” Jenny Heon, a Sid Richardson College junior, said. “The Moody Center, for instance, serves as a great example of maintaining the traditional brick aesthetic while demonstrating design agency.”

Yekovich said he believes the new building in addition to the Moody Center for the Arts will make the western part of Rice’s campus an artistic hub.

“When you combine that with the Turrell Skyspace, all the athletic events, the Baker Institute events and the Glasscock School, it will give rise to a whole new level of vibrancy not only for Rice but the city of Houston as well.”

This article has been edited to correct Matt Brogan's name, which was originally stated as Mark Brogan.