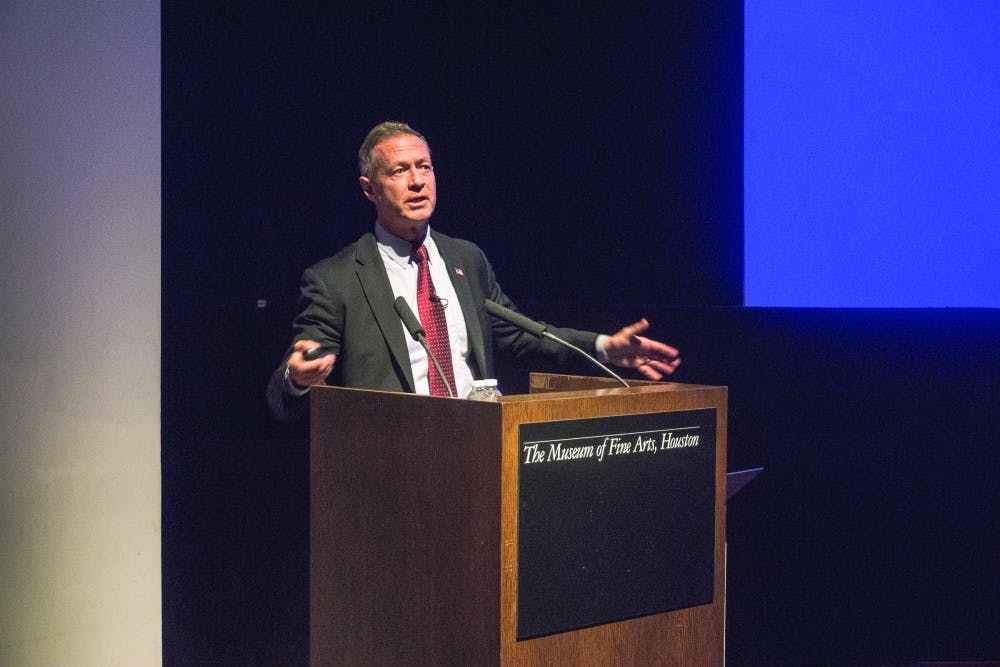 O’Malley, who also served two terms as mayor of Baltimore, is currently the chair of the MetroLab Network, which brings cities and research universities together to use data to solve citywide issues. Last Thursday, the MetroLab Network unveiled its Houston Solutions Lab, a partnership between Rice University and the city of Houston.

O’Malley explained in his presentation that the MetroLab network strives to help cities like Houston use big data to solve big problems.

“The idea behind this network is that universities can be powerful engines of research and development,” O’Malley said. “And if they’re paired with their cities, those cities can act as tremendous test beds of deployment, of scaling, of iterations that can really go to a national level.”

As mayor of Baltimore, O’Malley helped pioneer the use of citywide data collection with the implementation of the CityStat system, and as governor of Maryland, implemented StateStat. Both of these programs use quantitative analysis to measure a variety of factors from levels of violent crime to air pollution to help create targeted solutions.

According to O’Malley, he faced formidable challenges when he became mayor of Baltimore, but the use of data collection was able to significantly help this situation.

“In 1999, I ran for Mayor of Baltimore and by 1999 our city had become the most violent, abandoned and addicted city in America,” O’Malley said. “The three cities that achieved in the period 2000-2009 the biggest reductions in violent crime were Los Angeles, New York and Baltimore.”

The rapid dissemination of information in today’s society demands leaders who can keep pace, O’Malley said.

“In the information age, people know as much as their leaders,” O’Malley said. “And they usually know before their leaders. The effective leader [must] put her or himself in the center of that emerging truth.”

According to O’Malley, cities will take precedence and determine the country’s path forward.

O’Malley explained that this data-driven form of governance may even have the power to overcome significant ideological divisions within the U.S.

“There is far more that unites us than divides us,” O’Malley said. “The innovation that’s emerging in cities is going to lead us into that new day.”