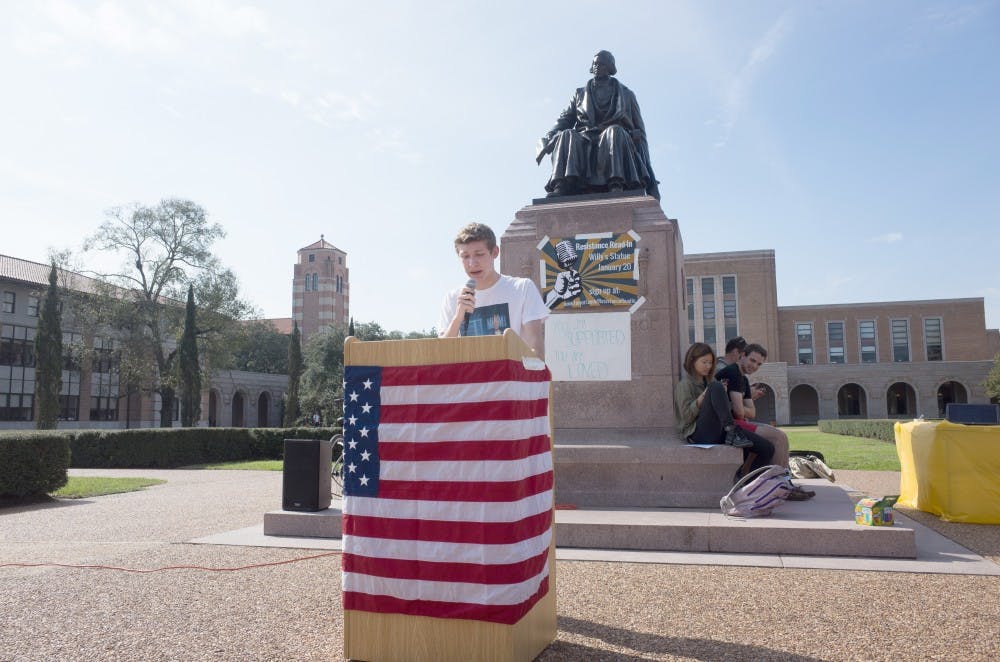 As Donald Trump was sworn in as United States president last Friday, some Rice students gathered for a teach-in addressing current social issues, others congregated in the Academic Quad for a read-in of works of protest and a few flew to Washington D.C. to witness the inauguration.

The teach-in, which was organized by English professor Lacy Johnson and anthropology professor Zoe Wool, was open to the public. Hundreds of people attended, according to Johnson.

“Each session was either well-attended or full to bursting, which makes it clear to me that there is a hunger for these sorts of conversations and this type of engagement here at Rice,” Johnson said.

The read-in, hosted by the English Undergraduate Advisory Board, also accomplished its goal of filling every timeslot and providing four hours of continuous readings, which ranged from literary essays to poetry to political speeches, according to Wiess College sophomore Steffannie Alter, who organized the read-in as a member of the English Undergraduate Advisory Board.

“It was wonderful to see so many people expressing their activism and passion through art," Alter said. “I loved seeing people stop in the quad to sit and listen, or just pause to hear a piece as they walked through — it really convinced me that we were able to bring attention to the sentiments of solidarity we were trying to express.”

“I said no [previously] because it seemed like the right thing to say, but if I’m being honest, yes, of course it is a protest,” Johnson said in an email explaining the change. “But not in the way that you might think. In that jumble of emotions in the days after the election, I landed on despair. I walked through campus and saw that many of us were united in that. For me, if this event is a protest against anything, it is a protest against despair.”

Not every student saw the inauguration as a cause to protest, however. The Rice University College Republicans hosted a watch party in the Duncan College commons. A few Rice students, including Jones College sophomore Jed Greenberg, traveled to Washington to attend the inauguration.

“I'm not the biggest Trump fan, but it was a great experience,” Greenberg said. “We flew into Philly because it was cheaper, and on the drive to DC we saw a convoy of RVs with Trump flags, real America converging on DC. The inauguration itself gave off some very historic vibes — the crowd looked like a sea of red [‘Make America great again’] hats.”

Brown College freshman Carly Frieders said it seemed everyone who attended the teach-in was opposed to Trump’s policies.

“However, I don't think that means the event was unfairly biased,” Frieders said. “When a president rises to power by attacking already marginalized groups and blatantly distorting fact, I think students and academics have a right and a responsibility to lend their expertise to the discourse and respond without having to equivocate about the dangers that the leader presents.”

The morning session consisted of three panels, which focused on histories of dissent, immigration laws and climate change.

McMurtry College senior Madhuri Venkateswar said the event was more content-heavy than she had expected and not as focused on emotions or partisan politics.

“Just by function of the university that we’re in, we’re going to have liberal students and liberal professors, which is going to color everything,” Venkateswar said.

Even so, Venkateswar said she felt the event focused on objective evidence rather than partisan sentiments.

“It was simultaneously less preachy and more of an echo chamber than I had expected,” Neal said.

Neal said the overwhelming sentiment in each of the three sessions she attended was liberal, which concerned her because she felt that talking to people of similar beliefs does not seem likely to generate change.

The lunch break, which featured student groups like HACER and the Women’s Resource Center, gave students an opportunity to connect with activist groups.

In the afternoon, there were 10 breakout sessions, conducted over three time slots and facilitated by 13 Rice faculty and graduate students.

McMurtry sophomore Ella Matsuda said she went to the teach-in because she hoped that it would direct future action.

“After the election, I felt kind of powerless and wasn’t really sure how to go forward,” Matsuda said.

By learning about social movements ranging from the evolution of the alt-right to the abolitionists, Matsuda said she gained new perspectives on both other ideologies and the pace of social change.

“We are so young, so we haven’t seen the arc of these movements before,” Matsuda said. “Our perspective of how long it takes to accomplish change is kind of skewed.”

Neal said it is easy to think of everything as being immediate, especially in our age of social media and rapid communication.

“Today gave me a lot of perspective about the long game,” Neal said.

For Frieders, the biggest impact of the teach-in was the turnout.

“I learned a lot from the variety of workshops presented, but my biggest takeaway was just realizing how many people on Rice's campus care about social justice issues and have some sort of skills they can contribute to defending them in light of the new administration,” Frieders said.

Wool said the presence of Rice staff was especially notable, suggesting unity within an engaged community.

“I've received a number of emails from students, faculty and staff describing how grateful they were for the event, and for the conversations that it sparked,” Wool said. “This is clearly only the beginning.”