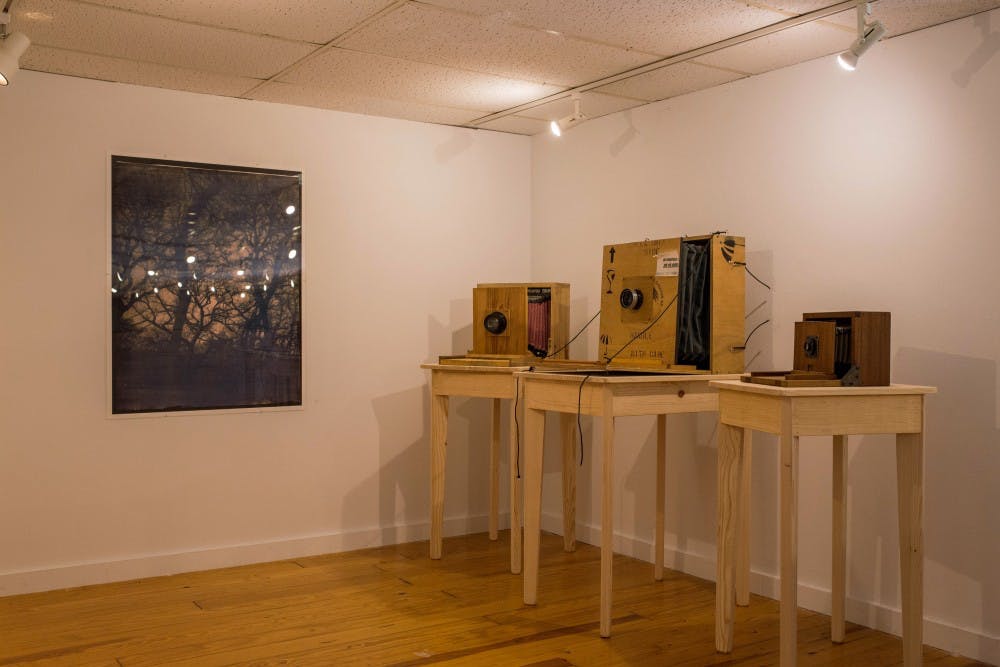 Photo by Phyllis | and Phyllis The Rice Thresher

Garrett Marsh is a lover of nature and a lover of art. With his photography exhibit “Sunprint Landscapes: Photographs of Honey Creek Ranch,” Marsh brings his little corner of nature to Rice University for us to see in all its cyan-toned dreaminess.

The exhibit, which opened at the Rice Media Center last week, specializes in long-exposure cyanotype photography that faithfully reflects Marsh’s appreciation of the world around him.

Marsh spoke to students before his show’s opening and described his artistic process, inspiration and experiences. He also discussed his relationship with nature—especially at Honey Creek Ranch, his family’s property and a place he grew up going to—which similarly developed throughout his childhood.

“[Honey Creek Ranch is] this space that, as a kid, I fell in love with nature and it kind of changed the way in which I see the world.” he said. “It was the first time I was able to watch the four seasons pass through in a single space and nothing changes ... It was the first piece of land that I felt like I had a grasp of, or felt like it kind of showed me something.”

Marsh then recalled a story from childhood, when, around age 13, he and his best friend survived in the wilderness for several days on their own, refusing to eat when they returned home to a barbecue to “prove a point.”

Winningham, a close friend of the Marsh family, recalled something Marsh’s father had told him.

“[His] dad told me that the thought, actually, that [Garrett] could be put down by helicopter at any point on the earth’s surface, and [he’d] not only survive, but [he’d] be happy,” Winningham said.

And, indeed, to really understand Marsh’s work and the passion behind it, one has to understand the deep connection he has with the natural world. Encouraged by this creative and adventurous upbringing, Marsh later attended the California College of the Arts in Oakland, California. It was there that, during his sophomore year, he began the project that would become “Sunprint Landscapes.”

“I had an assignment where I was supposed to integrate myself into a social sphere — and I really didn’t want to,” Marsh said. “So, since I didn’t really like that assignment, I decided that it would be funny to become a tree. I made all these little matchbox pinhole cameras that took two-week long cyanotype exposures, put them all around the city. They were these little terrible pictures, and I guess that was the start of making cameras and playing with cyanotypes in the cameras.”

Today, Marsh’s photographs are of an other-worldly nature. The negatives appear purely in white and a blue that is intense, yet pleasing. The positives take forms like shadows, mystic and earthy. In both, the silhouettes of trees caress the page like veins of the earth, arranged as unpredictably and as eccentrically as nature itself. Because Marsh’s cyanotypes are made on paper coated with a light-sensitive cyanotype emulsion that requires extremely long exposures ranging from days to weeks, the images appear slightly blurred, like sunbathed watercolors.

At the Rice Media center, Marsh’s photographs hang on dark wooden frames carved by the artist himself. Most are the original negatives, while some are carefully reprinted positives. Some frames hold the same image in both forms, mounted side by side, and others hold one single image suspended in the center.

In addition to the photographs, the exhibit also displays three of Marsh’s own hand-built cameras. Of these, one even appears to be made of an old wine box: “handle with care” appears boldly printed on the bottom right corner below the camera’s lens. Marsh even built the tables on which the cameras are displayed, and the three of them stand beside the largest of his prints, which draws the viewer’s attention immediately. Spanning several feet in each direction, this print contrasts sharply with others that are only inches wide. And yet, the photographs’ thematic material, as well as their shared tonality, allows all the pieces to appear in harmony.

Marsh explained why he became attached to such a complicated medium in the first place, and recalled the exact moment he created his favorite photograph — the one that began it all.

“[T]he first interest was in all these little matchbox pictures, everything that was moving was gone, because it’s such a long exposure that it just disappears,” Marsh said. “Then I started messing around with that and I started building these cameras.”

Years later, Marsh described this new show as a “redone” version of his college project, which became his senior thesis. Now, with more time and better, larger cameras. Marsh also spoke of a deeper gratification, a type of drive, that cyanotype photography has brought to his life.

“[T]he photograph begins to replace the photographer’s memory,” Marsh said. “I was experiencing the world only through this lens.”

Walking through Marsh’s exhibit is a walk into another universe where trees are white and even the air is blue. The works are almost impressionist, but naturally so, seeming to capture bits of time in the fibers of the paper and the emulsion’s blue tones. In his artist statement, Marsh gives thanks to his parents for encouraging him to explore and be inspired by the world.

“Their lives led me to a deep fascination of a time and a landscape that I still dream of,” Marsh wrote.

And, after falling into this world through Marsh’s photographs, I find that I am left dreaming of it, too. Sunprint Landscapes: Photographs of Honey Creek Ranch will be on display at the Rice Media Center through December 1st. Gallery hours are 11:00 a.m. to 5:00 p.m..