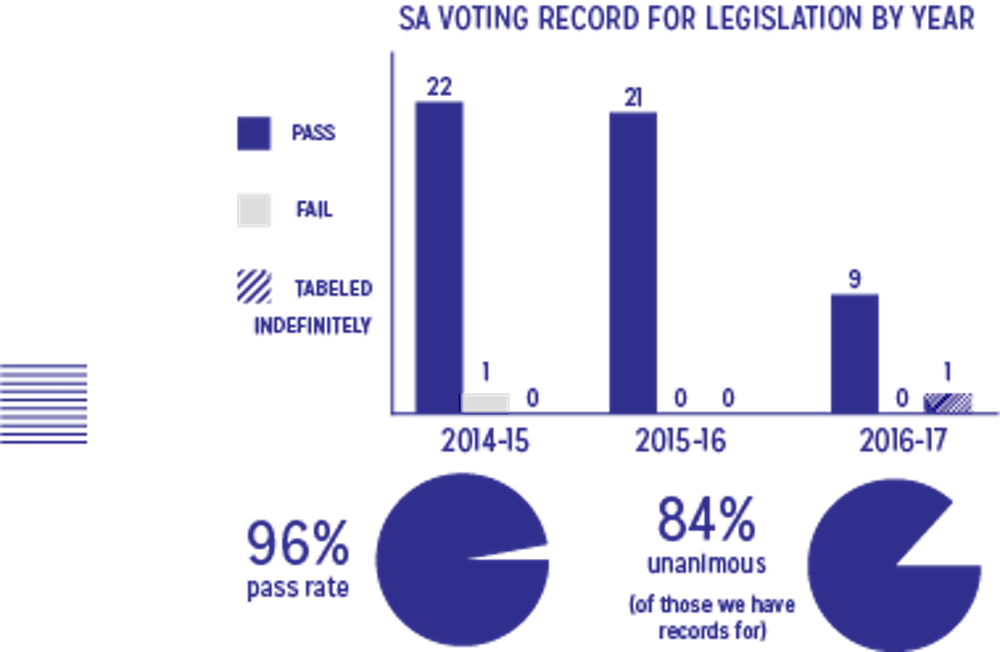 Despite constitutional mandates requiring comprehensive Student Association voting records, a Thresher investigation showed issues with transparency and found voting procedures to be unconstitutional. The SA has also approved greater than 95 percent of legislation introduced over the past three years, an aspect that SA President Griffin Thomas said he has been attempting to address with increased debate this year.

Unconstitutional voting by straw poll has occurred for all but three pieces of legislation under Thomas. In straw poll voting, SA voting members expressed support for or against legislation with a show of hands, but did not verbalize their vote. The SA secretary recorded only whether a piece of legislation passed or failed, but not how individual representatives chose to vote.

However, the SA Constitution states in section IV.A.3.d, “All votes on legislation shall be conducted by roll call” and a record of voting by each member should be recorded and accessible online.” The Thresher notified the SA of its lack of compliance with the constitution with regards to voting procedure earlier this week.

Thomas said the SA was unaware the straw poll voting was unconstitutional, as the leadership had misinterpreted the constitution and instead followed procedure as outlined in the parliamentary handbook Robert’s Rules of Order, which the constitution states can be used in situations the constitution does not address.

“This happened [as] a result of the detailed nature and length of our constitution and the parliamentary code the Senate adopted,” Thomas said. “It is difficult for us to abide by these hundreds of pages of codes in usual circumstances.”

At the SA meeting this week, Thomas said all proceeding votes will occur via roll call.

“I wanted to be transparent about [this error],” Thomas said. “That was a mix-up on [SA Parliamentarian] Annabelle [McIntire-Gavlick’s] and my behalf.”

Martel College senior AJ Barnes said he was concerned by the lack of voting records.

“Students have a right to know how their representative voted, since they are selected through an election and should be held accountable,” Barnes said. “Furthermore, it is concerning that the student governing body is in violation of the very constitution which they are charged with upholding and amending.”

Thomas said students with questions on voting records should ask their representatives directly.

This is not the first time the SA has conducted procedures unconstitutionally this year. Last month, Thomas announced a closed session at the end of a Senate meeting without first conducting a two-thirds vote in apparent violation of the SA Constitution. When the Thresher notified Thomas of the procedural error after that meeting, he again pointed to the length of the constitution as the reason for the mistake.

“The SA Constitution is 111 pages long and it is sometime difficult for us to make necessary immediate judgments,” Thomas said at the time. “This is of course not to make an excuse for the oversight, but to say we understand the mistake and are making strides to correct it.”

McIntre-Gavlick, who chairs the Committee of Constitutional Revisions, said she plans to work on rewriting the Constitution with a few other people during winter break. The committee was formed in April and charged with reviewing and updating the constitution.

Although roll call voting is constitutionally mandated, SA voting records showed incomplete information on how representatives have voted persists over the past three years, especially for the 2015-16 administration of former SA President Jazz Silva (Sid Rich ’16).

The investigation also found over the past three years, under Thomas, Silva and former SA President Ravi Sheth (Martel ’15), all legislation introduced in the SA had a 96 percent passing rate. Among the legislation for which specific voting records by representative exist, 84 percent of legislation was passed unanimously.

Two pieces of legislation, out of 54 introduced, have not passed. The first, requiring residential colleges to guarantee on-campus housing for Rice Naval Reserve Officers Training Corps members, failed by majority vote in spring 2014. The second bill, censuring the Faculty Senate following their approval of the Committee on Undergraduate Curriculum credit cap, was tabled indefinitely this year after SA members decided it could hinder a working relationship with administration.

During Silva’s term, all legislation passed, although the bill endorsing a mandatory Critical Thinking in Sexuality class elicited contentious debate and passed only narrowly.

Thomas said there may have been a shortage of debate on legislation in past years due to the short length of the meetings, typically ranging from 15 to 20 minutes. Former Jones College Senator Jovany Franco said he agreed with that sentiment.

“A lot of people just wanted to leave and they were like, ‘OK, let’s vote, let’s keep it short, like 20 minutes,’” Franco, a junior, said. “[Silva] definitely contributed to that by saying, ‘OK, it’s going to be a short meeting,’ so there’s debate but it wasn’t good, definitely not, except for [with CTIS].”

Silva said she disagreed with the idea that meeting length influences quality of debate.

“If students felt like there wasn’t enough time to deliberate during a single Senate meeting, they would continue to table the bill until they felt more comfortable voting,” Silva said of the legislation under her term as SA president.

Under his term, Thomas said he has been trying to have meetings last at least an hour in an effort to expand debate.

“By setting the expectation that meetings are gonna be an hour, we can sit here for an hour and stare at the ceiling or we can actually talk about issues,” Thomas said. “We’ve talked about issues more substantively but there is still a ways to go.”

Martel President Ly Nguyen said debate often occurs more within the college instead of at Senate, especially for controversial topics such as the approval of installing security cameras at residential colleges, which passed earlier this year.

“Inherently the discussion at the college level will be more robust than that which occurs at SA meetings, and that’s okay as long as the opinions, comments and questions from those discussions are effectively communicated at SA meetings by college representatives,” Nguyen, a senior, said.

SA External Vice President Hannah Todd, a junior who formerly served as the SA senator for Wiess College, voted ‘yes’ on every bill last year. Todd said she based her vote entirely on surveys she sent to the college regarding legislation.

However, Franco said basing voting off of constituents’ opinions on legislation can be problematic if constituents aren’t properly informed. He said he faced this issue with Jones when voting on CTIS last year, despite providing students with the text of the legislation.

“[Jones students] were agreeing and disagreeing with things that weren’t true because they hadn’t read the legislation,” Franco said. “They kind of just went with what they’d heard from other people. We thought since there was so much confusion and a lot of people were in support of the bill because of reasons that were not legitimate, we decided to vote against it.”

“You knew a lot of the people and you understood the effort they put into the bill, and typically it’s very reasonable things they would ask for,” Franco said. “The choice was up to Jones, but deep inside, it’s difficult to shoot down somebody else’s work since we’re on the same level.”

McMurtry College President Madhuri Venkateswar said it tends to be hard to convince her to vote against legislation because she typically agrees with proposals’ intentions.

“I usually give legislation the benefit of the doubt,” Venkateswar said. “However, I have become more critical of university efforts through my time at Rice.”

However, Jones President Chris Sabbagh said bill passing requires people to agree to change the status quo, which is difficult without good reason.

Silva said she felt it is easier for a bill to pass than to fail, but valued having healthy debate.

“As a president, it was extremely hard to moderate the level of debate,” Silva said. “You can only moderate the quality of debates.”

Thomas said he recognized the importance of maintaining a robust discussion.

“We have to be very careful because if we’re known as an organization that just passes anything anyone introduces to us then our opinion and the opinion of the student body weighs less for the administration,” he said.