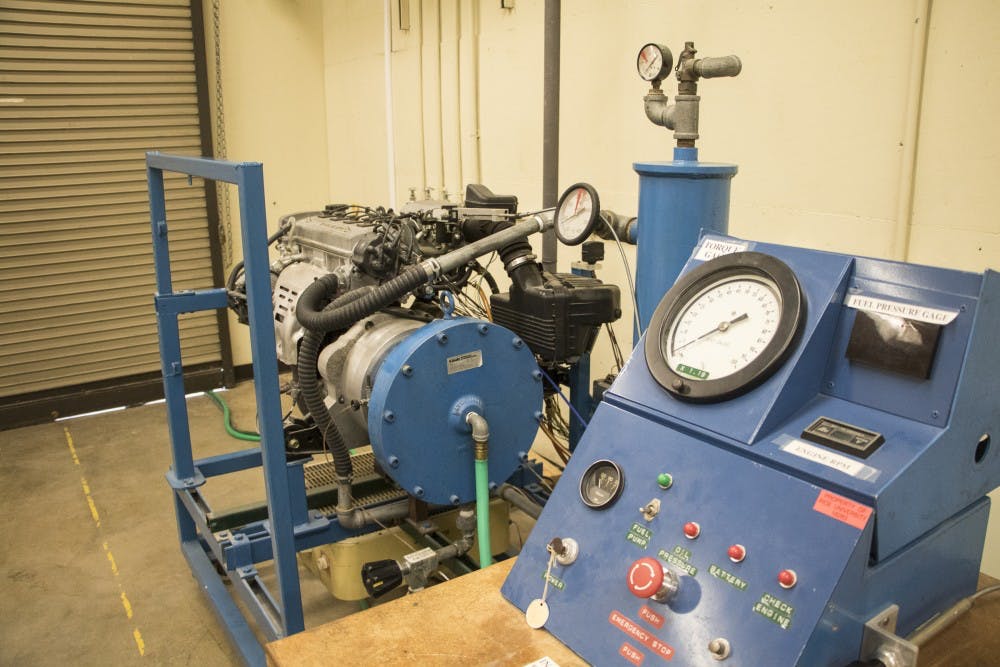 Rice Engineering Alumni has committed $50,000 to improving laboratory classes in the mechanical engineering department. The funding comes in response to student concerns raised over the past six months regarding outdated curriculum and facilities, including at a highly attended town hall meeting last semester.

The financial commitment spans three years: this year, $30,000 will go towards restoring the department’s internal combustion (ICE) lab as a class, according to department chair Laura Schaefer (Wiess ‘95).

The ICE lab, which studied a Toyota car engine in the Mechanical Engineering building, used to be a valuable offering in the department, Schaefer said.

"Back when I was a student here the ICE lab [demonstrated] all sorts of things you would expect someone graduating with a degree in mechanical engineering to have knowledge of," Schaefer said.

Over time, the engine fell out of repair and needed equipment was removed from the lab, according to Schaefer and REA student liaison Nicholas Sepulveda, leading to the class being canceled in recent years. The REA funds will allow the department to repair and renovate the lab. Schaefer said the return of the class, tentatively as a senior lab elective, would supplement the existing curriculum by integrating topics from core MECH classes such as heat transfer, fluid mechanics, vibrations and thermodynamics.

Following the completion of the ICE lab by the end of this year, the REA will contribute $10,000 per year for the next two years to create new labs for the department. While the MECH department does already have a mechatronics lab, Schaefer said the new labs would cover robotics, HVAC (heating, ventilation and air conditioning) and power generation, including emerging technologies such as fuel cells.

“Rice students will finally begin having the experience they need in college to confidently pursue their passions in other industries that are underrepresented at Rice, like aerospace,” Rashid, a Will Rice College senior, said.

Schaefer said the department reached out to students for help with the lab renovation. Five students will take a class next semester that involves repairing and preparing the lab for full classes next year, she said, while other students who could not commit as much time will help in a more limited way. According to Schaefer, setting up the lab will be a valuable experience for the students with issues such as regulatory guidelines and purchasing. MECH advisory board member Preston Hill said the student involvement will set the ICE lab apart from other labs.

“Other labs are often boring or uninvolved,” Hill, a Duncan College senior, said. “The department has heard those complaints and tasked some undergraduates with designing the [ICE] lab to make it interesting and challenging. This part is more important than the gift itself.”

According to Schaefer, the department has been able to raise some money for improvements through various funds, but with so many potential projects more funds for laboratories were needed.

"There's no money from the university or the school for improving laboratory facilities,” Schaefer said. “That's one of the reasons we're turning to groups like the REA for this."

Schaefer, who said the department is grateful to the REA for the donation, said lab quality was one of the biggest complaints following the MECH town hall last semester and that the initial impetus for the donation came from students approaching the REA at the end-of-the-year picnic in the spring following the MECH town hall. REA President Wendy Hoenig (Brown ‘86) confirmed the story.

“We were very impressed by the students we met,” Hoenig said. “They came around from table to table, passed out fliers, sat down with us and made their pitch.”

REA leadership then reached out to Schaefer about making the donation, who presented several possible projects that could use funds. The REA and Schaefer agreed on the ICE lab as the first project to fund since it can be completed in a year. Drew Petty, last year’s ASME president, said the REA’s support for students is appreciated.

“[Students] feel like we have already helped make a difference,” Petty, a Duncan College senior, said. “We're very grateful that the REA heard our concerns and were generous enough to make a donation in under six months since the lab issues were brought to their attention.”

The REA, currently located off campus, will be moving into the new administration building being built near Lovett College, Sepulveda said. Hoenig said the mechanical engineering department is currently the REA’s focus, since limited funds only allow them to taking on multiple financial commitment of such a size at a time, but that the REA will continue to reach out to and work to support engineering students.

"The REA is very organized — they're just not connected to student outlets, but I don't think it's their fault,” Sepulveda, a Wiess College junior, said. “The REA will go heads over heals for just about anything for engineering students. They'll come here on weekends — they're very dedicated. They really want to give back to students, but it's difficult to do so when they don't really have student connections."

The REA currently gives out student awards and funds to students projects, such as Rice Eclipse. It also hosts networking and advice events, including a tailgate at the football game this Saturday, Sepulveda said. As another example of the events the REA hosts to connect with students, Sepulveda pointed to plans for a REA social at St. Arnold’s Brewery in early December. He said it is difficult, however, for the REA to inform students of all the events.

"Even I don't know all their events — that's how big the disconnect is," Sepulveda said.

While they were happy with the planned lab improvements, Hill, Sepulveda and Petty all said the biggest challenge facing the department is still a lack of faculty.

“Consider the following analogy — I am not a sports person, but here goes: in a football team with 9 players, no one criticizes the players' ability, only their lack of teammates,” Hill said.

Sepulveda agreed that the small number of full-time professors makes individual interaction with them more difficult, such as asking for letters of recommendation. Hill said Schaefer and the other department heads are aware of the need for more faculty.

“The department administration knows there is a problem, and is on our side, trying to fix the problems on all fronts,” Hill said. “Meanwhile, working with the university administration and the Dean of Engineering is far less transparent.”

Schaefer said mechanical engineering is a rapidly growing major both at Rice and nationwide, noting in particular that many international students study MECH or computer science.

Schaefer said the department has considered but rejected taking measures to cap the number of students, at least for the time being.

"This goes against all Rice tradition, but should we limit the department enrollment?” Schaefer said. “Like computer science does, should we have a freshman/sophomore class that weeds people out of the department? None of our hearts are in doing anything like that. We love our major; we love people participating in the major."

According to Rashid, the newly created MECH student advisory board has planned another town hall next Friday, Nov. 11, to continue to address concerns with the department. Schaefer said a survey has already been sent out to MECH students regarding issues to be raised at the event.

Schaefer said she is working towards many improvements beyond the lab facilities, including better student mentorship, more faculty, more space for classes and ways to reduce the size of laboratory groups.

This is the full version of an article appearing in the Nov. 2 print edition of the Thresher.