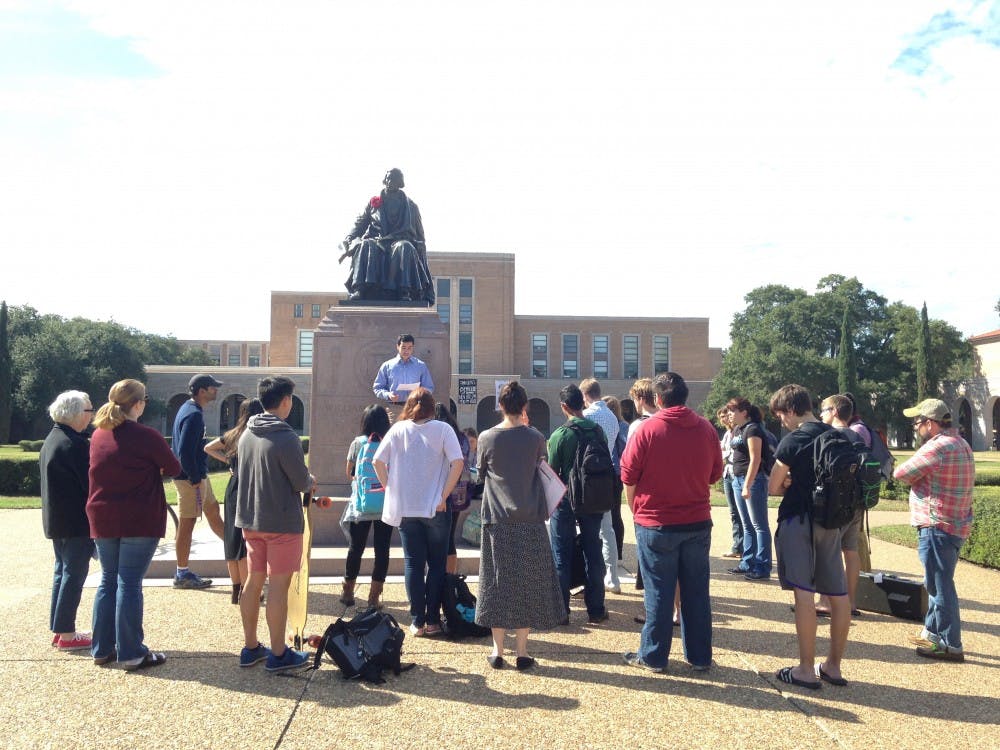 More than 150 students gathered around Willy’s Statue in a demonstration of solidarity within a day of Donald Trump’s confirmation as President-Elect. College presidents invited students to a midnight vigil organized by Lovett College sophomore Andrew Hadad.

“As a country we stand more divided than ever, but as a campus we will come together as one united force,” the email invitation read. “We have the ability to hold hands across divides.”

The vigil ended with a group hug that appeared on both student media site The College Fix and conservative outlet Breitbart. After the gathering, the Rice community responded to the election with initiatives to spur discussion and action plans.

The Office of Multicultural Affairs hosted a dialogue on Friday to address those who felt disillusioned or unsure of the future. For the rest of the semester, diversity facilitators will host weekly tables at their respective colleges to engage students on their concerns, anxieties and questions, according to OMA director Catherine Clack.

In addition, the OMA is supporting efforts to set up tables in the Rice Memorial Center for students to write down their thoughts, an idea proposed by Student Center director Kate Abad and First Year Program assistant director Chris Landry. Clack said Rice is trying to ensure people have resources to heal.

Gabriela Balicas, a student diversity coordinator at the OMA, said it is important to validate people’s fears and pain, as they cannot move forward without properly grieving and healing.

“People are scared of harassment, losing people they love, getting physically beaten and this becoming normal,” Balicas said.

Balicas emphasized the importance of being an ally to other groups.

“Rice’s culture of care extends beyond the alcohol policy, I’d like to believe,” Balicas said. “That involves taking care of the rest of the student body as much as you can.”

While she would like to engage Trump supporters in conversations, Balicas said their sense of alienation on campus makes it difficult.

On the same Friday, around 20 students attended an ad hoc meeting at the Willy’s Statue to reaffirm their commitment to addressing climate change and to gather ideas for making an impact.

Jones College senior Hasan Seede and Duncan College senior Ryan Pappal, who organized the rally, said they felt urged to action by Trump’s repeated misconceptions about climate change and the appointment of Myron Ebell, a climate change skeptic, to head his transition team at the Environmental Protection Agency.

“We don’t have another four years to wait for the next election to move on this issue, because this is urgent,” Seede said.

“We need to show it will be a smooth, slow transition where people embedded in fossil fuels we want to move away from are not going to be left behind,” Pappal said. “We’re not going to rapidly change their lives but slowly invest in renewable energy and causes that save energy.”

Wiess College senior Audrey Odwuor said college students are in the best position to because they will be most directly affected by the effects of global warming.

“It doesn’t end with our campus, we have to talk to people who don’t know, who aren’t educated, who are ignorant,” Odwuor said.

According to Pappal, students concerned about climate change are forming a new club called Texas Students for Climate Change Action.

Undergraduates, graduates and faculty members of the anthropology department came together on Monday for conversation, commiseration and community. Caring for custodial staff, working against everyday injustices and creating more nuanced discourse were among the topics discussed.

The goal of the gathering was to create an unstructured space for conversation, according to assistant professor Andrea Ballestero.

“It was really important to have a space to be together, to experience together what for many of us was a very traumatic event, even if not completely surprising,” Ballestero said.

“These days my head is spinning in depressing thoughts, so it is inspiring and hopeful to come together with allies,” Lotterman said. “It reminds me the country is not the only community I belong to; I also have a strong community at Rice.”

Ballestero said she was pleased participants talked both about the immediate action and the longer term implications for scholarship, activism and the way in which they inhabit the world, rather than focusing on just political strategies or personal feelings.

Director of Undergraduate Studies and assistant professor Zoe Wool said together with some colleagues, she is planning a teach-in on Inauguration Day in January, which will be a mini conference where professors explain the implications of a Trump presidency from an academic perspective.

“I have been trying to encourage other people to turn Inauguration Day into a national higher ed day of action to help students figure out what exactly this presidency — and the policies that it might entail — might mean,” Wool said. “[We want] to look to [academia] to give us more informed, complex ways of understanding what has happened.”