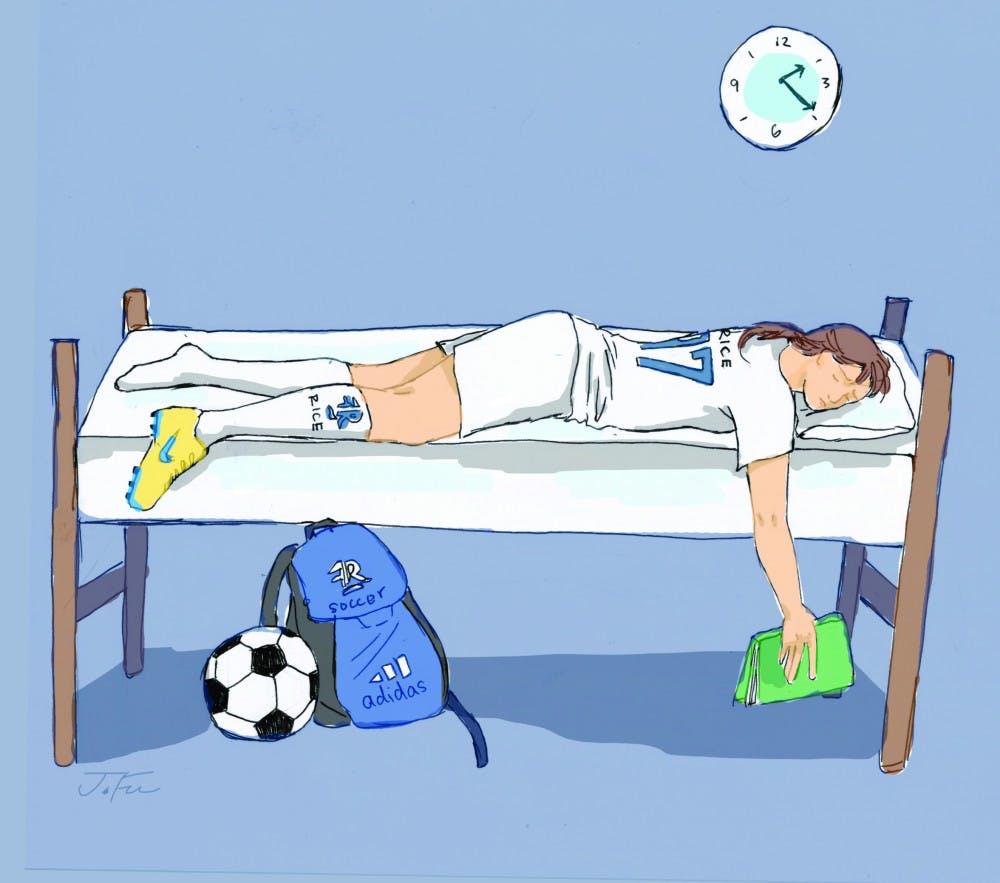 In the early hours of the weekdays, when most students are still asleep, Rice student-athletes are already training. Athletes arrive at the soccer field, track and football field or the pool as early as 7 a.m. and often return to do further conditioning after classes. Many athletes keep up this commitment for the duration of their time at Rice. Some, however, find the requirement too extreme. The grueling schedule, stressful culture and perceived lack of support from students can make the Rice athletic experience difficult and even harmful according to some athletes.

According to senior runner Ellen Diemert, who is also the president of the Student Athletic Advisory Committee, athletics takes up a significant portion of her time.

“It’s like another course,” Diemert said. “It adds an extra challenge. Making it to [academic] meetings and activities and things like that is challenging.”

“It led me to have a very organized lifestyle,” Noel said. “I would make sure to go to bed on time and keep up a very healthy diet.”

For some, such a schedule can become impossible to maintain. Caitlin, a sophomore athlete whose name has been changed for anonymity, said her athletic commitment is affecting her health.

“[Rice] expects you to have a really high GPA and train a lot,” Caitlin said. “We don’t get any extra perks from professors and a lot of people on the team are engineers or pre-meds, which is hard enough as it is. I’m permanently tired.”

The early morning practices force athletes to adjust their sleep schedules so that they go to bed as early as 9 p.m. According to Rita, a senior and former athlete whose name has been changed, the early bedtime creates a barrier between athletes and the rest of the Rice community.

“Rice kids, for some reason, always want to do stuff late at night,” Rita said. “Everyone is trying to have meetings and study breaks at 10. We were in bed at 10. We woke up at 5. There were things that were very hard to get involved in because of that.”

Ultimately, the difficulty of balancing athletics, academics and extracurriculars led Noel to leave the track team. He said athletics prevented him from participating in clubs and activities.

“I knew I would have to maintain that very organized, strong work ethic towards school and track at the same time, and I wanted to diversify my extracurricular experiences,” Noel said. “I made a lot of really great friends on the team, but it wasn’t really conducive to what I wanted to gain from college.”

There is little the athletic department can do to change the early morning practices, according to Senior Associate Athletic Director Bryan Blair. During the day, athletes are attending class and in the evening, dinner and labs get in the way of full team activities. Blair said practice times for the entire team are hard to set.

“Our coaches have a very difficult job in trying to schedule a practice that fits everybody’s schedule,” Blair said. “There are small windows where you can get a full team of various majors, various years and various degrees all together at one time. That’s one of the hardest things our coaches face every year.”

The early practices, however, are not the only obstacle athletes face in their schedules. During the season, road trips force athletes to leave campus for up to five days at a time, causing them to miss classes and other campus events. Rita said the road trips are particularly difficult for seniors.

“Now that I’m a senior, I have to be [on campus] to interview for jobs,” Rita said. “I can’t be gone Thursday through Monday because I have to be here for job interviews. When you’re on a schedule like that, you can’t tell your coach you can’t go on a road trip because you have a job interview. They’ll tell you to move it.”

Rita eventually left her team in order to devote time to other commitments, including job interviews.

Both Caitlin and Rita noted that beyond the issues athletes face regarding their schedules, many struggle with mental health. Given their commitments, they find they have little time to focus on homework and social lives outside of their teams. Additionally, the NCAA recognizes on its website that student athletes are at higher risk of eating disorders. According to Caitlin, eating disorders are prevalent in the Rice athletic community.

“There are a lot of body image issues with female athletes,” Caitlin said. “[Our bodies are] on display all the time. There are definitely a lot of eating problems on our team right now, and it’s hard to eat well and stay healthy when a lot of my teammates don’t.”

Rice athletics has a system known as the “bod pod,” which is a device that scans athletes’ bodies and measures their fat content. It is not uncommon for college athletic programs to use this system and systems like it. Athletes take baseline tests throughout the year, but the device is used primarily for the purpose of helping athletes track their rehabilitation after injuries.

Despite its intended use, the device’s readings are available to athletes and coaches regardless of injury status. Caitlin said the device led her to be overly conscious of her eating habits.

“If you have a body fat percentage of 20 percent, the coaches will tell you to get it down to 15 percent by the next time you take the test,” Caitlin said. “Every time you eat a meal, you check how much fat is in it and it takes over your mind.”

Rita took a more direct stance on the bod pod tests. She said the tests are detrimental to the health of athletes.

“Giving student athletes a graph, a numeric tracker, of how their body looks is wildly unhealthy,” Rita said. “There are a lot of girls on the team who have struggled with eating disorders.”

Outside of eating disorders, athletes face pressure to succeed from themselves and their coaches. According to Caitlin, the stress of achieving that success creates a negative attitude surrounding the teams.

“If you don’t perform well, people won’t talk for the next week because they’re that upset,” Caitlin said. “It’s a difficult environment for failure. It’s a pretty shitty environment.”

It is no secret that Rice athletics struggles with low attendance and student apathy regarding sports. This is an issue that has been discussed at length both within the athletic department and in the Thresher. In the athletic community, according to Rita, it is a sore subject.

“For a lot of the athletes, especially the football players, I think they’re annoyed by it,” Rita said. “It’s not like Ohio State or [Texas] A&M where they’re celebrities. No one here really cares.”

Rice football recently set a 10-year high in student attendance when about 1,800 students watched Rice host Baylor University earlier this year. While the achievement was celebrated, attendance was still less than a third of the student body. Diemert said Rice students should take advantage of their free admission, especially with regard to football games.

“Looking at big state schools, where their football programs are huge, everyone goes to the games,” Diemert said. “That’s really cool. That would be awesome if Rice could be like that too.”

Football is often used as a benchmark for attendance, but other sports struggle even more to draw fans. According to Caitlin, female athletes feel neglected because of the lack of student support.

“Everyone says they feel unsupported by the Rice student body,” Caitlin said. “Nobody comes to watch. There’s like five or 10 people there, but usually they’re best friends or roommates or boyfriends. And nobody knows what’s going on with the teams. Nobody asks.”

Rita said both athletes and non-athletes contribute to the divide.

“The separation comes from both sides,” Rita said. “Both groups need to realize we are all here. We are all Rice students. I think athletes say, ‘Screw these kids, they think I’m stupid,’ and nonathletes say, ‘Well, you don’t deserve to be here,’ which I think causes a lot of tension.”

The Student Athletic Advisory Committee works to facilitate interactions between the athletic community and the wider Rice community. Recently, the SAAC hosted Owls on Stage, a talent show during which athletes showcase their skills outside of sports. Events like this one, according to Diemert, are designed to help bridge the divide between athletes and rest of the university. Diemert said while the divide exists, it is a problem that can be resolved.

“It’s a relationship and the relationship has to go two ways,” Diemert said. “I think it can be fixed. We need to appreciate everything each group has to offer.”

While Diemert said she is happy to be part of Rice athletics, Caitlin, who still competes for her team, is not. Because she is on scholarship, she cannot leave her team without her financial support being revoked. Caitlin said due to the scholarship money and her obligations to the team, she continued to compete for Rice athletics even during her worst times.