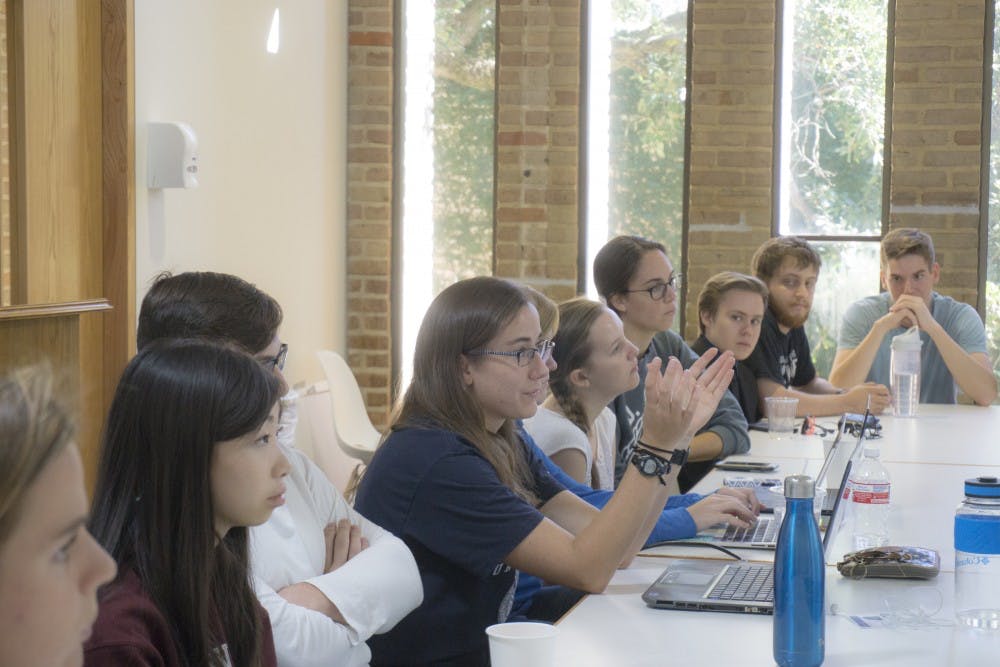 The undergraduate student Honor Council proposed several changes to its constitution, including expanding the Council and implementing a statute of limitations, and passed an updated Consensus Penalty Structure, at an open meeting on Saturday.

The CPS is a system for evaluating Honor Code violations that outlines penalties in order to provide students and faculty with an expectation for case outcomes. This encompasses plagiarism, falsifying data and cheating. The updated CPS will be used for cases received after Oct. 22.

Since increasing the number of Council members entails a constitutional revision, such a change requires presentation to the Student Association and a vote of approval by the student body to go into effect.

Honor Council Chair Katie Jensen said expansion is necessary, as the current Council composition is restricted by standards set in 1948 when the student body was less than a third of its current size. In addition, in 2015 the Council lost almost one third of its voting members with the creation of the graduate student Honor Council.

Jensen said the proposed solution, to alter the Council’s constitution so the composition is defined in the by-laws, would allow the Council to alter its size with an internal vote.

“We wanted to change the Constitution in a way that would allow for flexibility in future years if the Council is faced with an extremely heavy case load,” Jensen, a Lovett College senior, said.

A second change to be brought before the SA is a statute of limitations which would give the Council the power to declare a case cannot be heard. In the proposed statute, such a situation could arise in three situations: if 90 days have passed between the suspected violation and its discovery, if more than 15 days have passed between the violation being discovered and reported to the Council or if more than a semester has passed between when the violation is discovered and the evidence presented.

The statute of limitations is partly in response to a case in an Introduction to Program Design (COMP 215) course in which the professor waited almost a semester to report a suspected violation. While the incident occurred in spring 2015, the case was not heard by Honor Council until fall 2015.

Former Honor Council Chair Alex Metcalf said without a statute of limitations, students are at risk of a professor collecting evidence against them without their knowledge, placing them at a disadvantage in the process.

“The decisions we make are based off of material evidence,” Metcalf, a Will Rice College senior, said. “If the professor has structured their case such that it is very difficult for the student to submit tangible and useful material into evidence, then [students] don’t have a case.”

The statute of limitations was also recommended by the Faculty Senate’s Task Force on the Honor System, which was comprised of faculty and undergraduates, and engaged in a yearlong process of evaluating the effectiveness of the system. For Metcalf, the statute, which will be presented to the SA by Jensen on Oct. 31 is a long time coming.

“It’s something I pushed for during my time as chair last year, it’s something recommended by the Faculty Senate’s Task Force on the Honor System and I’m proud to see the Council has decided to implement [it],” Metcalf said.

In the spring semester the CPS underwent major changes when the minimum grade reduction penalty, originally one third of the letter grade, was increased to a full letter grade. On Saturday, the Council upheld this decision.

The Council changed the requirement that a one letter grade reduction can apply only to assignments weighted less than 5 percent in a course to those that are worth 6 percent and under. According to Ike Arjmand, a sophomore class representative, the newly approved system is more fair for students because smaller assignments are often given 5 percent weight, and would result in a two-letter-grade reduction.

Metcalf said the CPS meeting, which occurs at least once a year, allows the Honor Council to ensure punitive measures remain consistent and reasonable.

“The discussion at our CPS meeting was important and it is one part of an ongoing conversation that allows the Council to continually update and codify our response to academic dishonesty,” Metcalf said.