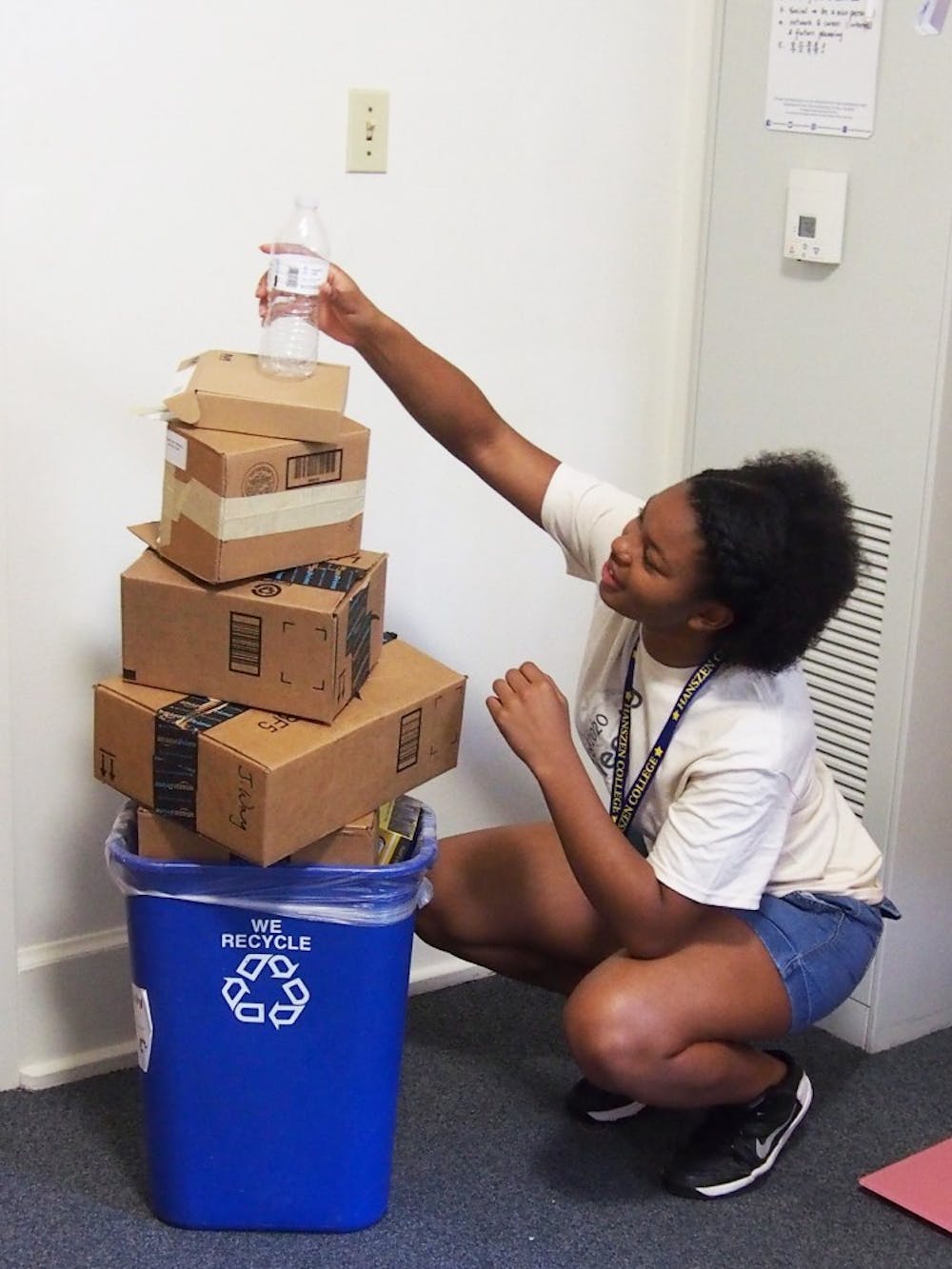 Recycling efforts at Rice are in the spotlight once again as part of a growing conversation sparked by dedicated student and faculty involvement. Richard Johnson, director of the Administrative Center for Sustainability and Energy Management at Rice, announced that administration has set a new recycling goal, which aims to divert 40 percent of all waste to recycling by the year 2020.

According to Johnson, who is also a professor of environmental studies and sociology, the initiative was driven by the efforts of two students, McMurtry College junior Ben Johnson and Jones College senior Ethan Hasiuk. The pair interned with Richard Johnson this past summer, and he said their comprehensive review led administration to reconsider Rice’s current approach to recycling.

“One of their earliest questions was, ‘What is your goal?’” Richard Johnson said. “They pointed out that we didn’t have a target or a recycling goal that we were trying to achieve.”

Following research on diversion rates — which refers to waste diverted from landfills through recycling — Rice set the progressive goal of 40 percent diversion, Johnson said. Consequently, endeavors to make Rice’s new objective a reality have brought up more issues, and renewed efforts to battle them.

Recent conversation on recycling involves the problem of contamination, which threatens to reduce how much recyclable material is actually recycled. According to Richard Johnson, however, most recyclable waste is actually successfully diverted. In fact, despite a slight decrease since 2014, diversion rates at Rice are generally increasing. Rates were last measured at around 28 percent of total waste in 2015 and are expected to be closer to 30 percent this year.

“But, that’s not to say there aren’t times where things that were in a recycling bin, for one reason or another, end up being thrown away,” Johnson said. “We’re hoping that improved signage, along with improved communication, will reduce contamination.”

To combat these issues, Ben Johnson and Hasiuk have designed posters and labels they hope to deploy around campus to bring more attention to available recycling bins, and clear up ambiguities about what can and cannot be recycled. According to Richard Johnson, the recently increased infrastructure of Rice’s recycling program is contributing greatly to this recent growth in recycling rates.

Higher availability of outdoor recycling bins throughout campus, which currently number between 25 or 30, shows the progress that has been made since 2013, when only two outdoor bins were available on campus. In light of Ben Johnson and Hasiuk’s efforts, Richard Johnson emphasized the importance of student involvement in recycling at Rice, identifying recent student-led projects that yielded significant improvements.

“Students have been a real driver, actually, or, I should say, a partner,” Richard Johnson said. “It was student effort of going through buildings and identifying locations that needed bins that made the big increase possible, and it was a student project team willing to study outdoor recycling that made identifying those locations possible. Students have been an enormous help.”

Baker College Eco-Rep Travis Kwee contributed to some of these projects, and was part of the team that identified the need for more recycling bins after experimental implementation yielded measurable improvements.

“We ended up ordering over $3,000 worth of recycling bins, and then there were around five of us who distributed them across campus,” Kwee, a junior, said. “We measured the contamination rate by mass, before and after, and we did see a significant increase in recycling after recycling bins were added.”

Kwee stressed the importance of educating people about contamination, noting that confusion often causes recyclable material to be thrown in the trash. To address this concern, Kwee worked with Brown College freshman Tracy Tse and Duncan College sophomore Alice Liu to put together an informative presentation they are hoping to show at college cabinet meetings.

“There are a bunch of little things that we really want to get ingrained into people’s minds,” Kwee said. “We don’t want that myth that Rice doesn’t recycle anything to become a reality.”

At Brown College, where Kwee is a part of the Social Concerns Committee, sustainability efforts are reaching out to students by getting personal in an attempt to make partying more sustainable. According to Kwee, parties are responsible for producing large amounts of waste, and efforts to reduce their impact are focusing on replacing red solo cups — which are not recyclable and can cause contamination — with more sustainable options. Both Richard Johnson and Kwee are pushing for recyclable and reusable items to replace red solo cups.

“We had a project in my class a few years ago that piloted the idea of a college buying a set of reusable wear that could be checked out for parties,” Johnson said. “Baker College has really run with that concept. Travis Kwee, as the Eco-Rep over there, has done a fabulous job ... and so a number of other colleges, at the end of last academic year, purchased their own set of reusables.”

Kwee said he hopes new administrative and student efforts will encourage students to be more conscious, step in and spread the word about proper recycling.

“I think a lot of consumer choices are feeding the waste issue, as well as the contamination issue,” Kwee said. “So, if we can get consumers to change their choices, I guess that’s the best way to combat that ... It really just takes a couple of people to encourage all of their friends to make little changes to make their lives more sustainable.”

Richard Johnson also encouraged students to focus on waste minimization as a key factor of sustainability in everyday life.

“Recycling is good, but even better is not generating the waste in the first place,” he said. “The greenest energy is the energy you didn’t consume; the greenest product is the product you didn’t need to buy.”