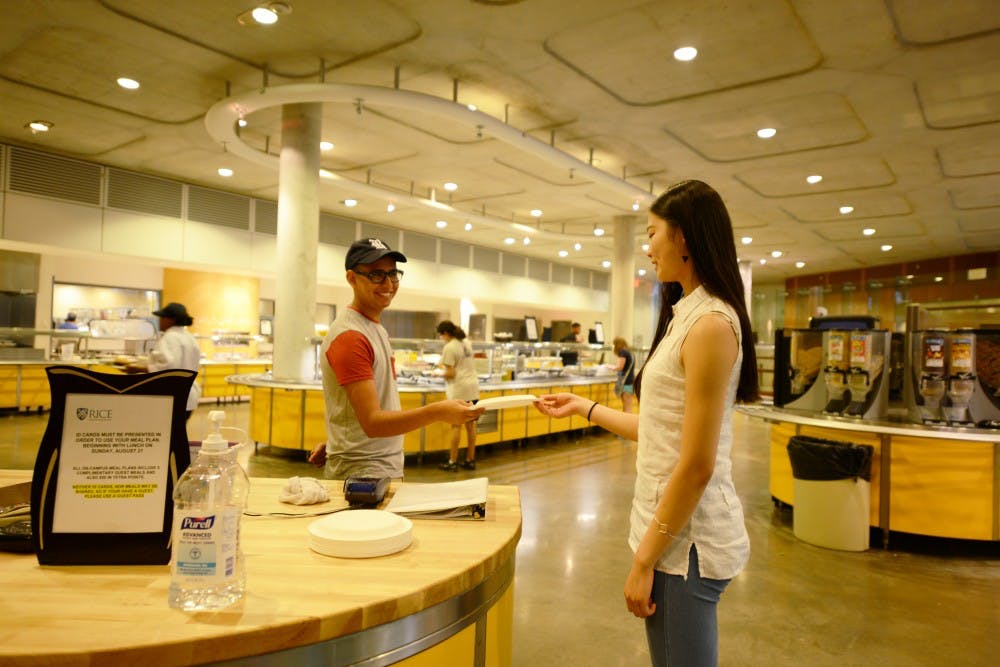 Contrary to some students’ belief, last weekend’s switch to exclusively paper plates in some serveries was not a pilot for eliminating ceramic dishes on weekends. Instead, the dishwashing machines in West Servery broke and could not be repaired until Tuesday, which led other serveries such as North and Seibel to switch to paper, according to Housing and Dining Senior Business Director David McDonald.

Because the dishwashers at Rice use a high-temperature sanitation cycle, sometimes there are issues with washing dishes when the system cannot reach the 180-degree Fahrenheit threshold that the Houston Health and Safety code requires. The system can encounter several problems in heating water: the booster pumps can break, the incoming water can cool down below the standard 140-degrees, or the number of dishes can simply surpass the amount of available hot water, which is the most frequent problem, McDonald said.

Due to the relatively small size of its water tank and the number of diners who eat there, West Servery encounters the problem most frequently.

“At any moment that thermostat drops, we have to stop,” McDonald said. “That’s just a health and safety issue.”

Because the amount of time it will take for the system to catch up, or for the broken pumps to be fixed, is so unpredictable, the serveries must switch to paper plates as soon as the water ceases to reach 180 degrees.

“This is just the business model we’re living with,” McDonald said. “We just haven’t come up with a better way.”

At one point, H&D had discussed using paper plates instead of ceramic plates over the weekend, McDonald said. According to his calculations, the cost of hiring dishwashers for the weekend was equal to that of buying paper plates.

By his calculations, McDonald said about 20 percent of diners throughout the course of one year used paper plates, either because the dishwashers were down or because they were taking food out. According to a 2014 Thresher article, H&D wanted to supply takeout containers through the serveries, but the Houston health codes did not allow it.

“If I could just stop using paper, I would,” McDonald said. “Period.”

Due to the frequent backlog of dishes in West Servery, H&D has begun to discuss the possibility of switching to a chemical sanitizer in cases where the high-temperature system cannot keep up. This week, they tested a low-temperature sanitizer with eight percent chlorine, McDonald said.

Director of Sustainability Richard Johnson said that another reason for paper plates is that the serveries sometimes run out of ceramic plates toward the end of the semester, prompting them to use paper plates instead.

“It’s in the students’ court — they know they’re not supposed to hoard dishes,” Johnson said.

This tendency of removing dishes is the reason the serveries do not have mugs, McDonald said. Every time H&D or a residential college has bought mugs, they have gone missing within about a year.

“That was almost like buying a gift for everyone,” McDonald said.

Ben Johnson said that for students who are concerned about the environment, the best thing to do is return dishes promptly and remember to recycle their paper plates.