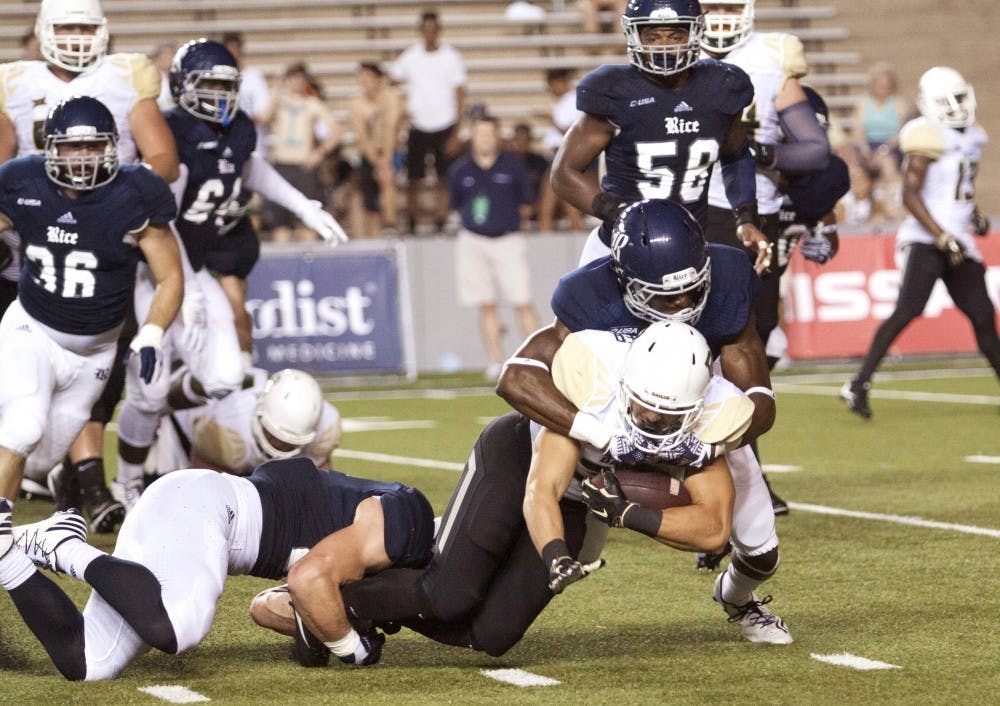 The halftime show at the Rice University vs. Baylor University football game on Friday attracted national attention over the weekend after Rice’s Marching Owl Band referenced Baylor’s recent sexual assault scandal in their performance. Many national news and sports media including ESPN, NBC Sports, Fox Sports and the Washington Post published articles regarding the show and a subsequent apology to Baylor fans released by Rice’s administration on Saturday.

During the halftime show, the MOB, which has a tradition of poking fun at opposing teams, formed a Roman numeral “IX” formation as a narrator said “Nine is the number of judges on the Supreme Court, or is it?” in an apparent allusion to Title IX, the federal legislation relevant to many cases of on-campus sexual misconduct and discrimination.

In the spring, reporting by ESPN revealed that Baylor had failed to properly investigate charges of sexual assault against football players, with football coaching staff allegedly directly interfering in the investigation process. As the scandal expanded in May, Baylor’s Board of Regents demoted university president Ken Starr to chancellor and fired football coach Art Briles. Briles was present at Friday’s game, though he left just before the halftime show. Some game attendees and news media reported that Briles received an ovation from Baylor fans at the game, but this could not be confirmed.

The MOB went on to form a star formation and the band played “Hit the Road, Jack” as the narrator said, “Now for today’s quote of the day, given by famous Clinton prosecutor and former Baylor president Ken Starr, who said, ‘I did not investigate that coach.’” Prior to serving as Baylor’s president, Starr had led the investigation into then-President Bill Clinton’s affair with Monica Lewinsky, during which Clinton falsely stated, “I did not have sexual relations with that woman.”

The references were sandwiched between other digs at Baylor in the performance, which ended with an old joke about the letter “N” standing for “knowledge” in Waco, where Baylor is located. Following the performance, an angry Baylor fan approached MOB members, but was calmed by Rice students.

On Saturday, Rice’s Office of News and Media Relations released a statement regarding the halftime show, noting that university administration had no prior review of the MOB’s performances.

“We regret any offense, particularly if Baylor fans may have felt unwelcome in our stadium,” the statement said. “While we know that the MOB did not intend in any way to make light of the serious issue of sexual assault, we are concerned that some people may have interpreted the halftime performance in that vein.”

The statement referenced the indignant reaction of some to the performance: Many comments on articles regarding the halftime show online were negative, with some arguing the show made a joke of sexual assault. Most of the national news headlines referred to the MOB as having “made fun of,” “mocked” or “trolled” Baylor over the sexual assault scandal.

"Sexual assault is a matter of serious concern on campuses across the nation, and all of us have an obligation to address the matter with all the tools at our disposal," Rice’s statement said. "The MOB sought to highlight the events at Baylor by satirizing the actions or inactions of the Baylor administration, but it is apparent from the comments of many spectators and Baylor fans that the MOB's effort may have gone too far."

The statement currently available online differs from an initial draft of the statement which the administration emailed to the Thresher. That version, which was republished by Fox Sports, ended with the definitive assertion that “the MOB’s effort went too far.” David Ruth, the director of national and broadcast media at the Office of News and Media Relations, said he accidentally published the draft version initially but changed it to its current wording within five minutes.

However, many Rice students and others expressed support for the MOB online, with several sharing an op-ed published in the Fort Worth Star-Telegram entitled “Baylor deserved what it got in Rice band’s halftime show.” On many articles from national publications, a majority of comments seemed to be in favor of the MOB, with commenters arguing that the band had called attention to an important issue and that Baylor fans’ outrage should be directed instead at their own university’s conduct. Google searches for “Baylor sexual assault scandal” and “Art Briles” spiked by a factor of 50 to 100 on Friday night relative to their level for the previous week, and remained elevated throughout the weekend.

Chuck Throckmorton, the director of university bands at Rice, declined to comment at this time. Immediately following the end of the game, which Rice lost 38-10, the MOB published a transcript of the performance on its Facebook page, the first time they have done so for a show. According to the transcript, the title of the performance was “9.”

This article was edited to include new information regarding the change to Rice's statement, which the Thresher received after initial publication.