“May have gone too far”: MOB spurs sexual assault discussion 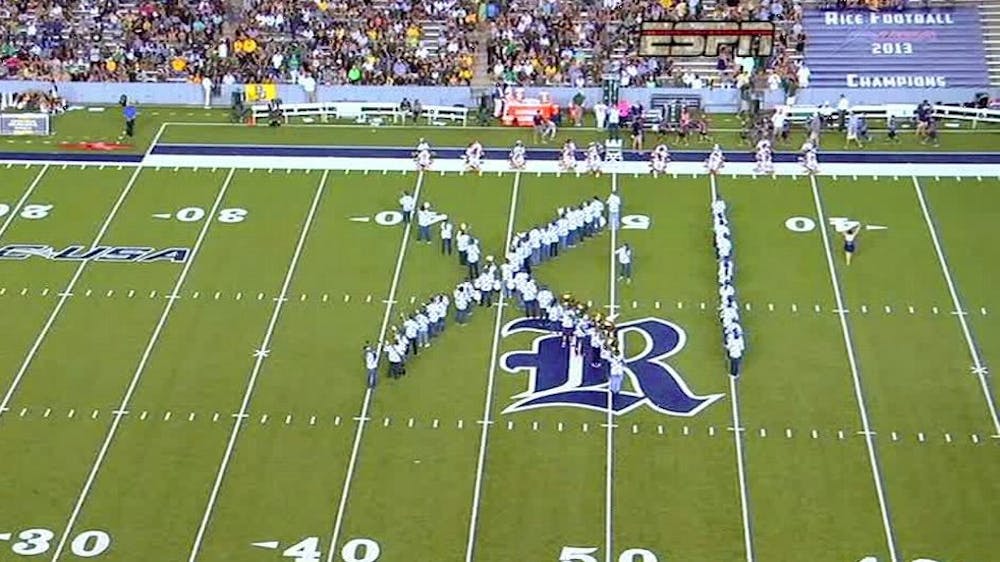 “The MOB, far from making light of the subject, was shining light on the subject and in doing so, doing a real service,” Hutchinson said. “I think they actually accomplished their purpose; I think they brought attention back to a serious issue that might have otherwise been unnoticed.”

In the halftime show, the MOB, which has a tradition of poking fun at opposing teams, formed a Roman numeral “IX” and a star formation in apparent allusions to Baylor’s sexual assault scandal, which was first reported in the spring, and the subsequent demotion of President Ken Starr. On Saturday, Rice’s Office of News and Media Relations released a statement expressing regret over any offense people took from the show.

Executive Producer of the MOB Andrew Graham said the team specifically selected references focusing on the Baylor administration. According to Graham, a Sid Richardson College senior, all students involved felt comfortable with the script, though several alumni thought the criticism was not explicit enough.

“During the entire script writing process, I made sure that the MOB did not victimize those directly affected by Title IX and only commented on the administration of Baylor,” Graham said.

Director of University Bands Chuck Throckmorton, who supervised the student team in writing the script, said he was pleased students felt empowered enough to take on the issue.

“That’s what we’ve been doing in campus conversations for a while now,” Throckmorton said. “It’s trying to talk about these difficult issues but get people not to be paralyzed by emotions and to feel empowered to do something.”

Many expressed support for the MOB online, with several sharing an op-ed in the Fort Worth Star-Telegram entitled “Baylor deserved what it got in Rice band’s halftime show.”

Some, however, interpreted the show differently. Kinda Sketchy member Kaitlyn Zoeller said while she believes comedy can push boundaries and create conversations, the MOB did it in a way that invited misinterpretation.

“They didn’t strike the right tone in their performance,” Zoeller, a Will Rice College sophomore, said. “There is a way for comedians to talk about serious issues and have an impact [but] we have to remember the victims of assault and take into consideration how they will feel.”

Zoeller said the performance would have been more effective if it featured stronger commentary.

“If you’re going to rightly criticize a school for defending and concealing rapists, you need to be clear that that’s what you’re doing,” Zoeller said. “If they had explicitly called them out then it probably would have been more inflammatory, but it would have at least been clear that what happened at Baylor is unacceptable.”

Lovett College senior Belle Harris said she felt the performance trivialized the lived experiences of the survivors of the referenced sexual assaults.

“I realize their intention was to stand up for [survivors], but when you also yell ‘SAT scores’ and ‘safety school’ to heckle this team at the same game, you put those jabs on the same level as the Title IX performance,” Harris said. “It sends the message that this isn’t something we take seriously, instead we are using it as ammunition to tease the other team.”

“Further, doing that show implies that we at Rice are above that sort of thing, which simply isn’t true,” Harris said. “Title IX violations and sexual assaults happen here too, and they aren’t always handled particularly well.”

Rice’s statement addressed the concern that some people have interpreted the performance as making light of the serious issue of sexual assault.

“The MOB sought to highlight the events at Baylor by satirizing the actions or inactions of the Baylor administration, but it is apparent from the comments of many spectators and Baylor fans that the MOB’s effort may have gone too far,” the statement reads.

Many students were upset with the language of Rice’s statement. Thresher Editor in Chief Yasna Haghdoost said Rice’s response was “disappointing” in an op-ed which was widely shared on social media.

Lovett President Rahul Kothari initially voiced frustration at the lack of support for MOB, but said his views changed after speaking with the administration.

“Most of the media headlines make our Rice’s statement to be an apology and to many students — including myself — it seemed like Rice’s statement on first glance was distancing itself from the MOB,” Kothari said. “It’s important to go back to the statement and realize that the university isn’t apologizing for the MOB’s actions, rather the statement claims we just ‘regret any offense’ Baylor fans may have had.”

According to Hutchinson, the statement was a conciliatory gesture.

Because the administration stands by the MOB’s show, the statement should not be characterized as an apology, Hutchinson said.

“We even discussed, ‘should this contain an apology,’ and the answer was no, it should not,” Hutchinson said. “It wasn’t just that we omitted it, we affirmatively decided it did not belong.”

At Monday’s Student Association Senate meeting, MOB member Orlando Cervantes said the school’s statement does not detract from the positive impact that the band accomplished.

“I didn’t feel offended by the apology letter because it’s public affairs,” Cervantes, a Will Rice freshman, said. “Their job is damage control. It doesn’t change what happened and the conversation [it] sparked.”