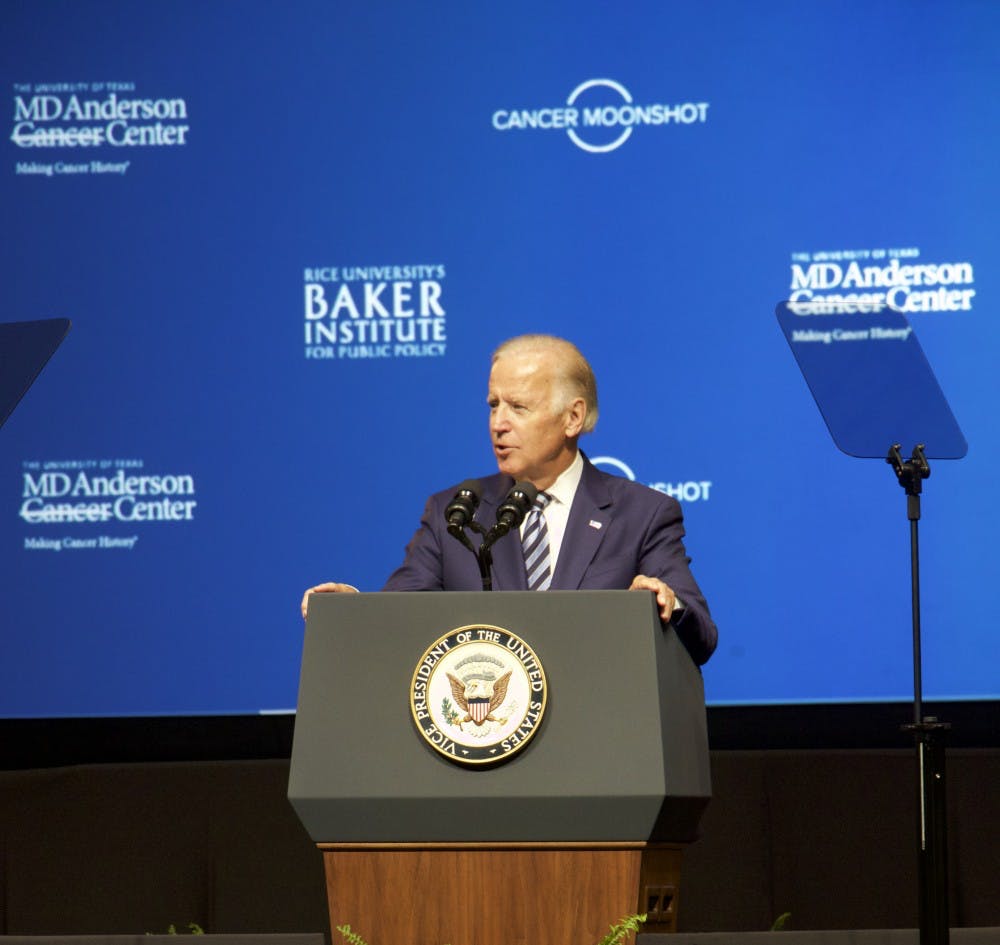 Vice President of the United States Joe Biden announced several federal policy changes in a forceful call for accelerating cancer research at Rice University today. These changes include expanding access to cancer clinical trials and a mandate to report all results of such trials.

Thousands of Rice students, faculty and alumni filled Tudor Fieldhouse to hear Biden’s address, which was hosted jointly by the Baker Institute for Public Policy and MD Anderson Cancer Center. Biden heads the National Cancer Moonshot, an initiative launched by President Barack Obama in his last State of the Union address. The vice president was introduced by his wife, Dr. Jill Biden, and former Secretary of State James Baker III, the namesake of the Institute.

"Our venue here, just a stone's throw away from Texas Medical Center, could not be more apt,” Baker said. “It was here President Kennedy inspired a nation with his call to go to the moon.”

Biden made several references to Kennedy’s famous address at Rice Stadium, the 54th anniversary of which occurred last Monday, comparing the effort to “end cancer as we know it” to the endeavor to reach the moon fifty years ago.

"There's still one bipartisan consensus in Washington, and I mean it's the only one,” Biden said. “It's Moonshot."

Biden said the Cancer Moonshot has four basic missions: to accelerate understanding of cancer, to improve patient access to care, to identify barriers existing at the federal level, and to provide greater access to cancer research and data.

To that end, Biden today announced what he said were potentially controversial changes to the research process. All relevant clinical trial results will now have to be reported on ClinicalTrials.gov, whether or not the products investigated are FDA-approved and on the market. Biden also called for expanded access to clinical trials and simpler online reporting of their availability and results via trials.cancer.gov, a new website set up by the government.

"We can find new patterns [in] the aggregation of data from millions of patients," Biden said.

Biden emphasized the US’ leading position in the global fight against cancer; he said many heads of state had approached him about helping with the moonshot initiative.

"You're going to see such enormous changes [in your lifetimes] that will blow your mind,” Biden said, addressing students. “This is America. There's nothing we can't do.”

“I think that especially as the senior class decides what they’re going to be doing next and goes out into the job market and into the world, that we should really be aiming to meet and exceed that ambition,” Thomas, a Lovett College senior, said.

The Bidens have a personal stake in the proposed changes: Biden’s son Beau died of brain cancer in 2015.

"This is personal,” Jill Biden said in her introduction. “This is about the fighters and the survivors, the caretakers and the researchers.”

Though he he has been affected by cancer, Joe Biden said the fight against the disease extends far beyond his family.

"Part of the Moonshot is honoring the way Beau lived his life with courage, without giving up hope,” he said. “But this is not just about Beau."

Lovett President Rahul Kothari said he was excited Biden chose to deliver his speech at Rice.

“To have Rice be a huge part of [the Cancer Moonshot] is incredible, especially with the medical center, MD Anderson, and with all of the amazing research that we’re doing here,” Kothari, a senior, said. “ It’s really cool to have this university be a part of that.”

Hanszen College sophomore Navya Kumar said she was pleased by the amount of details in Biden’s speech, considering what she described as her usual cynicism towards politicians.

“I think the fact that he talked about tangible things he could do, that was very impressive,” Kumar, a pre-medicine student, said. “Because politicians just speak and speak and speak, and they never say anything. But he did. He said something.”

Kumar said she is moved by Americans' unity in fighting cancer.

“To quote his rhetoric, as an American, I'm proud that we, at least on this one issue, agree that it's important that we need to fight against it.” Kumar said. “Because he's right, everyone has been touched either directly or indirectly by cancer. The fact of the matter is, we are all connected by this one thing that causes a lot of emotional distress and pain, and also binds us together through those emotions."

Frances Hessel, a recent graduate (Jones ‘16) who is studying at the Baylor College of Medicine, said she was inspired by her childhood experience with cancer to learn about the disease from a public policy standpoint.

“I've never seen a political figure in person before, so if there was a time that I was going to be interested in politics, it would be this intersection of what I'm interested in, which is medicine and the Vice President,” Hessel said. “It's pretty cool to have national interest in something that's so important to everyone.”

Biden said he believed the nation’s universities, along with immigration, are the “secret weapon” to moving forward on national issues.

"Everyone says America is coming back and it is,” Biden said. “[But] it's not because of Barack [Obama] and Joe Biden, it's because we have a secret weapon.”

"Rice University is truly one of the greatest universities in the entire world," he said to a cheering crowd.