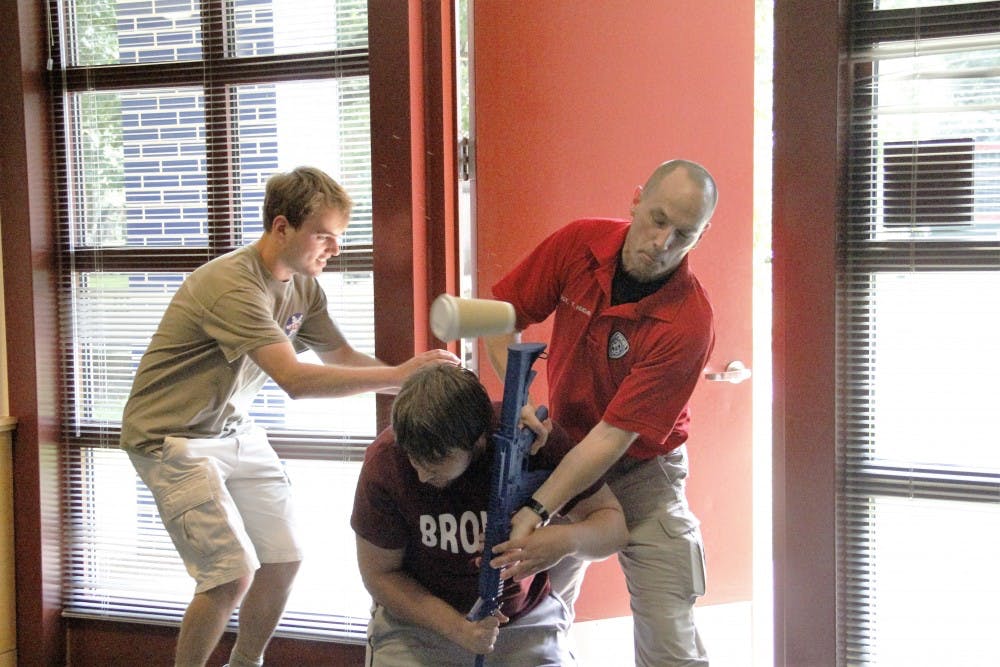 Around 40 students attended the Rice University Police Department’s upgraded active shooter training at Brown College on Saturday. Over the last four years, RUPD has provided lecture and video based training to 1,100 people, but this training, which includes practical application exercises, is the first of its kind, according to lead instructor Sergeant Tom Hudak.

“We know how to run, but if we can’t get out of the building, we haven’t taught students what to do beyond that,” Hudak said. “Students don’t know how to barricade and how to fight back and [people have] lost lives that way. We don’t want students to be sitting ducks.”

Brown President Santiago Avila coordinated the training with RUPD following a shooting at the University of California, Los Angeles in June. In an email to college residents, Avila announced that the training was mandatory for Brown cabinet members; Martel College president Ly Nguyen highly recommended that Martel cabinet members attend.

“While we hope that we will never encounter an active-shooter situation in our community, given recent events and today’s environment, preparedness is becoming essential,” Avila, a junior, said in the email. “Preparation, training and simulation can help mitigate the negative impact of such an event.”

Over the course of three hours, students identified escape routes such as windows and learned where to break them: in the top right- and left-hand corner. Students also barricaded the entrances of three different rooms at Jones College and Brown, utilizing belts and furniture to keep the door shut. Hudak said that even with a barricade, it is important to be prepared to fight, and so students practiced distracting, disarming and subduing a shooter played by an RUPD officer.

“If you do those four things faster than your opponent,” Hudak said. “You will win.”

The training also included a 30-minute lecture on active shooter statistics and a video from the Houston Police Department, “Run. Hide. Fight.”

According to a study by the Federal Bureau of Investigation, 200 active shooter incidents have occurred since 2000; three such incidents occurred at institutes of higher education in the last two years. Citing similar figures, Hudak noted that 96 percent of shooters are male and 98 percent act alone. Shootings typically last between five and seven minutes, and 50 percent of the time, the shooting ends before police arrive on the scene.

The course was also instructed by Officers Paul Cordova, Gary Evans, Rommel Espinola and Captain Paul Cordova and attended by Chief of Police Johnny Whitehead. Cordova said the training is not meant to scare people and expressed his belief that the Rice University campus is one of the safest in the nation.

“We would just rather err on the side of caution and be ready, much like a fire or a hurricane or a natural disaster, so people can feel safe like they have a plan,” Cordova said.

Alex Cerda, Brown’s parliamentarian, said the training made him feel more prepared in the event of an active shooter.

“I feel more confident about what I would do in a scenario like this and about maintaining calm and keeping composure,” Cerda, a senior, said.

Josh Perez, a Jones sophomore, said he hopes to see the training expand in the future.

“I would honestly say that if this course could be condensed to an hour or two then it should be included in [Orientation Week] for every new student coming in,” Perez said.

Cordova said RUPD’s goal is to offer the improved active shooter program to as many students as possible.

“We hope to start out with student leadership and branch out to each college either during cabinet meetings or lunches,” Cordova said. “Somewhere where it isn’t too inconvenient for them to break away from studies. We don’t have a ceiling. We’ll keep going as long as there is interest.”