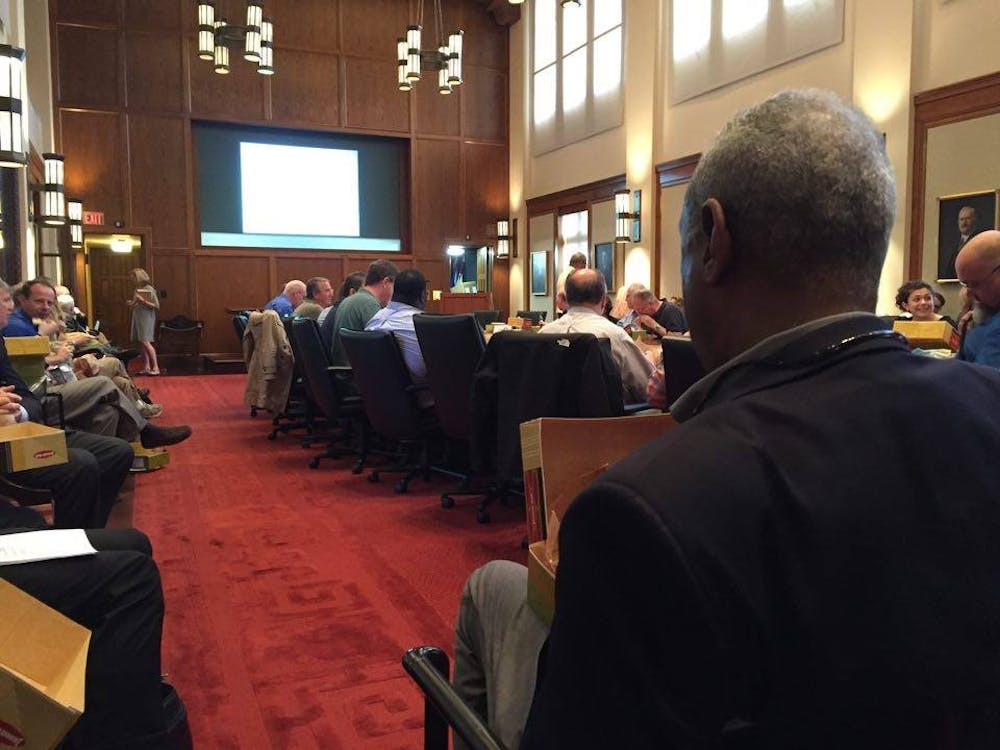 The Faculty Senate voted 14 to nine Wednesday in favor of the Committee for Undergraduate Curriculum’s proposal to lower the limit on credit hours undergraduate students can enroll in from 20 hours to 18 hours, starting with the incoming class of 2020. More than 100 students attended the Faculty Senate meeting to protest against the proposal in a sit-in organized by the Student Association, with at least 50 remaining until the vote on the changes two hours after the meeting began.

Current students and both current and incoming students in the architecture and music schools will not be affected by the approved changes, which also set a hard cap for overload petitions at 21 hours. Affected future students with the exception of freshmen will be able to petition their major advisor to overload, or the Office of Academic Advising if they are undeclared, instead of the Dean of Undergraduates as under the current system.

The passed proposal calls for the OAA to work with both the SA Senate and Faculty Senate to create overload petition guidelines, for President David Leebron to initiate a review of faculty advising with SA and Faculty Senate input and for a Faculty Senate review of the credit hour changes in 3 years to see if they have resulted in “an overall improvement in undergraduate experience.”

Before the Faculty Senate session, Angela Masciale, a former Hanszen College president, expressed her hope that the amount of students present and the signs they carried, emblazoned with slogans such as ‘87% said no,’ would make an impact.

“This should speak numbers, literally numbers, about how much we oppose this,” Masciale, a senior, said.

Out of 1,010 undergraduates who voted on SA polls earlier in the semester regarding the original proposal, which did not include the provisions about review and also limited freshmen to 17 credit hours instead of 18, a large majority of 87 percent said they opposed it. Based on this response, the SA created a Facebook event and began advertising the Senate meeting sit-in. On Tuesday night, less than 24 hours the final vote, the proposal was modified to its approved form; however, students went ahead with the sit-in.

Nikola Dyulgyarov, a Will Rice College sophomore, expressed his disappointment.

“I think that this has been a demonstration of administration's neglect of student input,” Dyulgyarov said. “I think it demonstrates an infallible capacity for lowering expectations.”

“It’s a good sign that we are getting riled up as a student body to stand up for what we believe in,” Dingus said.

Dean of Undergraduates John Hutchinson, who has helped lead the effort to lower the credit cap, said he was impressed with the Faculty Senate’s debate, which he said he found to be a comprehensive discussion of all arguments, as well as Griffin Thomas’ representation of students’ concerns.

Hutchinson emphasized a point he feels has been overlooked: the proposal has been three years in the making, he said, due to academic overload concerns raised by students.

Speaker of the Faculty Senate James Weston said the faculty listened to student concerns at SA, through emails and at the meeting.

"I thought the student protesters were polite, terrific,” Weston said. “It's the type of situation where you can listen to what the other side says and respectfully disagree."

Weston said the majority of the faculty did not think concerns about the proposal outweighed its benefits.

SA President Griffin Thomas said he was frustrated by the result of the vote, especially because although the Faculty Senate had been discussing the proposal since September, the Student Senate did not learn about it until February.

“The idea that this was some sort of negotiation that was done in good faith is simply false,” Thomas said. “The proposal was brought to student Senate right before spring break and during our change of leadership, asking for comment, as opposed to coming to us with a problem and asking us to be partners in drafting a solution. I am frustrated.”

Thomas said the response from the SA for the past month has been largely reactive, attempting to put stop-gaps in the most detrimental parts of the proposal. He said he hoped the vote did not sour relations between students and administrators, especially in the Dean of Undergraduates John Hutchinson’s office and the OAA.

According to Hutchinson, students were involved throughout the process, discussing the proposal as members of the CUC and drafting the proposal as part of a subcommittee. In February and in April, Hutchinson said the proposal was brought to the Student Association where he was in attendance to hear and address concerns. He noted that no changes were requested at the February meeting, and all proposed changes during the April meeting were incorporated into the proposal. He also said he has had separate meetings with student body leaders including college presidents and SA senators throughout the last two years. Additionally, Hutchinson felt that some recent student arguments have assumed there is no current credit cap, when in reality the maximum has been lowered from 20 credit hours to 18 credit hours.

Dorin Azerad, a McMurtry College senior who was involved with the subcommittee that drafted the proposal, explained her view of why student reaction to the proposal was delayed. According to Azerad, at the SA meeting in February when it was first presented, only four basic points were addressed: capping freshmen at 17 credit hours, capping non-freshmen at 18 credit hours, allowing a 20 credit hour weeklong shopping period and lowering the petition limit from 24 to 21 credit hours.

According to Azerad, President Leebron took much of the time at the meeting with an unrelated speech and so she only had five to seven minutes at the end to gather student feedback about the proposal. She also said that although she had spoken the night before with SA senators, she felt changeover and spring break had drawn student attention away from the magnitude of the impending changes.

"I was at the CUC meeting when it passed," Azerad said. "It seemed students didn't have a strong reaction because attention wasn't focused on it."

‘Our mission as a university’

The proposal provided data from the CUC and the OAA as a rationale for the changes. According to this data, Rice students rarely take as few as five courses while at similar universities a typical load is four or five, for both engineering and non-engineering students. In addition, Rice’s late drop deadline results in many students dedicating time to courses they fail to complete.

The data also showed that in fall 2014, 15 percent of all students with a declared single major registered for 19 or more credit hours, but by week two, the end of add period, this number had fallen to 13 percent, and by the end of semester, only 6 percent of single majors earned 19 or 20 credit hours. For students with more than one major, 22 percent began with 19 or 20 hours but only 12 percent ended up completing all of those hours. Finally, the proposal said that students self-report academic stress as the most common reason for going to the Student Wellbeing Office or Rice Counseling Center.

Duncan College senior Colin Shaw said he doesn’t believe the proposal has student wellbeing at its center. He pointed to the Senior Exit Survey, which he said provided no evidence that credit hours or workload had correlated to well-being issues.

“I think couching it as a wellbeing decision is a little bit false,”’ Shaw said. “It's probably condescending at best and not true at worst.”

Natalie Danckers, a Baker College junior who said she has enrolled in 20 hours for multiple semesters, said she shared Shaw’s sentiments and pointed to what she believes is the true issue being addressed by the proposals: a lack of qualified professors and class offerings.

“I think that administration is saying they are doing it for student well-being and maybe that’s part of it but I also think it’s a way of not having to hire more professors,” Danckers said.

Danckers also raised concerns about the process of overriding limitations on hours. She said that in the past she has applied for an override and been denied. According to Danckers, the issue of overriding should have been addressed before credit caps were imposed.

Leebron emphasized that developing guiding principles for when students should be allowed to overload is an area where there is still much work to be done.

“That work will be conducted in close collaboration with the student Senate, and will provide an important opportunity to take many of the student concerns into account,” Leebron said.

Computer science professor Luay Nakhleh, a voting member of the Faculty Senate, sent out an email to students expressing his rationale for voting in favor of the proposal in spite of student opposition.

“For me, the overriding issue was a simple question: What are students learning when they take too many courses?” Nakhleh wrote.

In his email, Nakhleh explained his concern that students who enroll in too many courses don’t master the material as well as if they had taken a lighter load. Though they may succeed grade-wise, he said they still fail to delve into content at a deeper level possible with fewer classes. In addition, Nakhleh said curves in difficult courses have become a crutch for students who are performing at a lower capacity due to overcommitment.

Nakhleh also said that students are unaware how often professors are asked for extensions and alternatives for making up missed work, additional results of student overcommitment. He expressed his hope that students acknowledge faculty are looking out for them and have the experience of having worked with thousands of students.

“I also do hope that students recognize that faculty members want the best for them, and have a much broader view of the issues and much more experience dealing with hundreds and even thousands of students,” Nakhleh concluded his email. “I truly believe that our mission as a university is to educate and produce scholars, and not to give away accolades.”

Thomas said he encouraged students who still wanted to enact some sort of action on the proposal to work with the SA on drafting the petition guidelines with the OAA.

“I think [this proposal] underlines just how important student governance is,” Thomas said. “This type of student governance requires really active participation from students. I know the SA is going to work harder to make sure students are more aware of these proposals as they develop.”

Thomas also said students can reach out to Leebron, Hutchinson, Weston and Chair of the CUC Susan McIntosh to express their frustrations about the proposal and its development.

“They need to understand that cutting students [from] these discussions has a cost,” Thomas said.