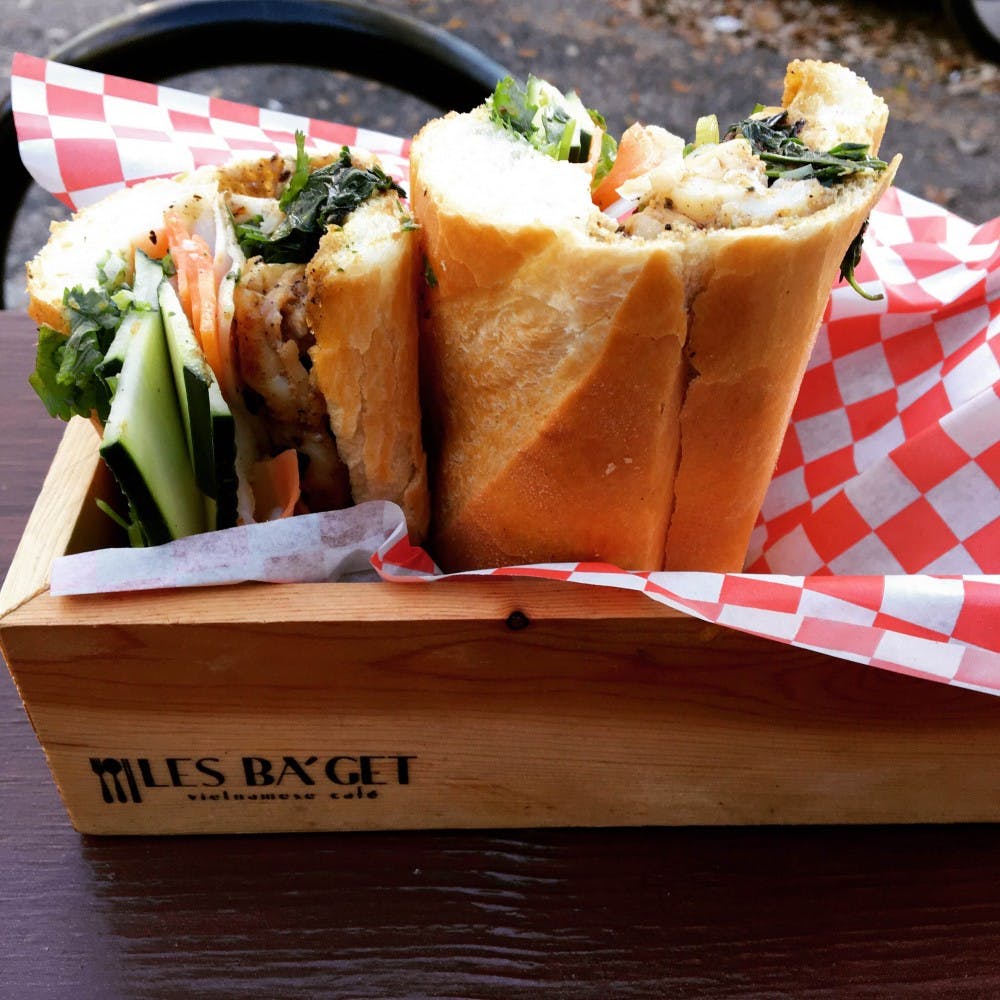 In a city as diverse as Houston, great Asian food is so easy to come by that it’s difficult to pick a favorite restaurant. Banh mi is one of the most traditional off-campus foods for Rice students, serving as a hearty snack, delicious meal or late-night food run. The banh mi, a Vietnamese-style sandwich, contains a French baguette that is typically stuffed with some sort of meat (pork belly, chicken, pate, etc.), pickled cucumbers, carrots and jalapeno. Inspired by Buzzfeed’s Feast Mode Hunger Squad, three brave friends and I went on a quest to find not only our favorite banh mi in Houston, but also the favorites of the experts who craft them on a daily basis. After eating at a restaurant, we would ask the restaurant workers where they would grab a banh mi if not at their own establishment. There were several rules for all of the restaurants visited. First, they had to be within Houston’s inner loop, with the reason being most Rice students cannot easily get to places outside of it. So, as a disclaimer, this review excludes any restaurants in the Sharpstown/Viet-town area, which may or may not have better banh mi. Additionally, each restaurant was judged on several factors: baguette quality, filling quality and the baguette-to-filling ratio.

With this criteria in mind, the first stop was Les Givral’s, an absolute classic for all Rice students located in the heart of Midtown. With all banh mi falling under $3, this is a steal for college students with tight budgets. Most sandwiches come out within five minutes, which is both a pro and a con. Meats are premarinated in a metal tin all day, and baguettes are thrown into a giant oven to be heated up in bulk, which reduces some of the freshness. However, the taste is still mostly uncompromised. The bread quality is top notch — crunchy on the outside, fluffy and pillowy on the inside. The filling quality is solid as well, with flavorful meats, crunchy veggies, fresh cilantro and a big slice of jalapeno pepper, which adds an intense amount of heat. The bread-to-filling ratio could be improved, as the veggies are a bit lacking. Keep in mind that the bread tends to run out later in the day, so come early if you’re hoping to catch dinner. While lines can be long during peak hours, they tend to move quickly.

When asked for a banh mi recommendation, the cashier suggested Don Cafe in Bellaire; however, given the inner loop constraint, the next suggestion was Cali Sandwich & Fast Food, just down the street from Les Givral’s. Cali has even more of a hole-in-the-wall vibe than Les Givral’s, with the smell of incense sticks and brusque service greeting you as soon as you enter the door. While the restaurant was mostly empty, the sandwiches themselves took about 15 minutes to come out — not exactly “fast food.” The wait was worth it for the arrival of the sandwiches, which were neatly nestled in baskets, with steam rising steadily from them, a sign that the meats were cooked to order. Unfortunately, the bread quality did not reflect the freshness of the sandwich, as it leaned toward the thin side. Additionally, the bread was so tough on the outside that several of my companions noted, “The bread hurts to eat.” The filling-to-bread quality was plentiful, with a decent amount of meat and bursting with pickled veggies, great for those who love lots of veggies in their banh mi. Cali does use a fatty mayo spread on their sandwiches, which ties the ingredients together to some extent, but also leaves the mouth feeling greasy at the end of the meal.

The last stop of the banh mi crawl was Les Bag’et, one of the new, trendy restaurants in the Montrose area. After having romped around Midtown for an afternoon, stepping inside to the polished wooden floors and sleek decor of Les Bag’et was a stark change. The prices certainly reflect the real estate, being triple that of its competitors in Chinatown, around $6-7 for each banh mi. Options here tend towards Asian fusion, with banh mi being served on either baguettes or croissants. The 24-hour sous vide pork belly is a popular option, but we opted for the coconut basil shrimp on a baguette to experience something with more “fusion” flavor. Service is fairly quick, with the sandwich being delivered in a literal wooden box — slightly impractical, but great for Instagram. The bread and filling are both fresh and flavorful, though a bit too rich as it’s stuffed with duck pate, truffle aioli and big, juicy pieces of shrimp. The sandwich appeals more toward American flavor conventions, with the fancier touches of truffle, flatly sliced vegetables and slivers of jalapeno, rather than large chunks. While delicious overall, the smattering of unusual ingredients made the sandwich taste distinct from an authentic banh mi.

With so many banh mi options in Houston, this three-stop exploration barely touched the tip of the iceberg. For a classic, quick option that never fails, stop by Les Givral’s for a sandwich or two. If you’re looking for a trendier restaurant that could double as a nice date night spot, check out Les Bag’et for some fusion options that are sure to surprise both your palate and your wallet.