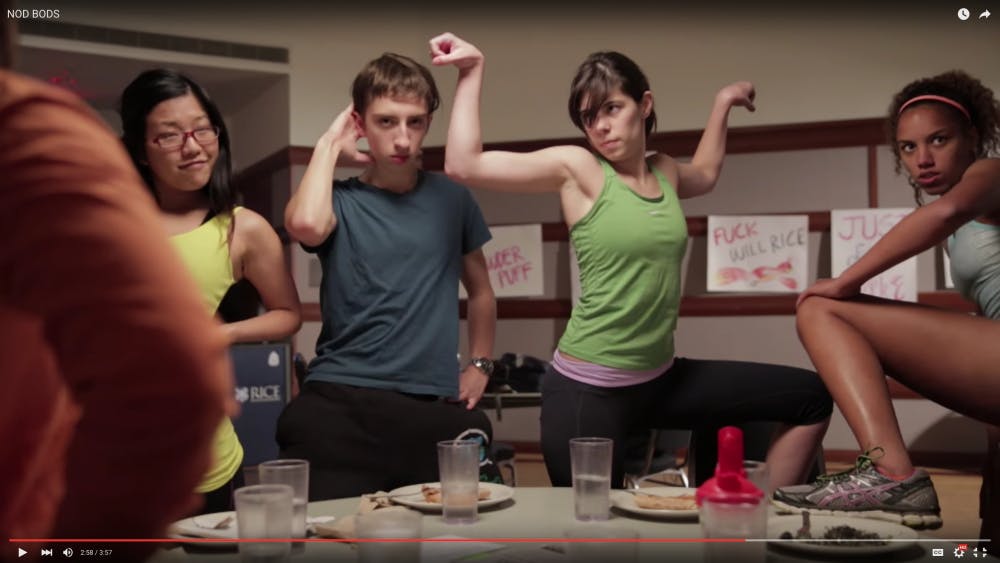 The second most-viewed video, a short satirical comedy entitled “Nod Bods,” had more than 800 views and was produced in fall 2015. According to Thomas and Griffin, this indicated that the best move for RVP may not have been to move away from filming Rice events, which they say more clearly benefits the student body.

The Blanket Tax Committee recommended that Rice Video Productions’ blanket tax subsidiary status be removed at the Student Association Senate meeting on Feb. 3. If the SA chooses to approve the proposal, the student body would vote on RVP’s status in the general election, marking the first occasion under the new blanket tax process in which an organization has been suggested for removal of blanket tax status.

The leadership of RVP said they disagree with the recommendation, and did not believe the committee communicated enough or made an informed decision through appropriate discussion. RVP receives an annual blanket tax of approximately $16,000.

The student body voted to designate RVP as a blanket tax organization in 2001, which was founded as Rice’s official television station.

“[The purpose of RVP is] to provide the undergraduate body of Rice University with a variety of programming and video technologies,” the organization's constitution states.

RVP President Patrick Huang said RVP also encourages students to borrow its video equipment for personal projects and teaches production techniques. The BTC raised concerns regarding the singularity of the organization, stating that this portion of the mission overlaps with that of the Digital Media Commons, which similarly provides students with high-quality audio/visual resources and instruction.

RVP no longer uses its broadcasting channel to distribute content and has instead for several years been releasing videos on YouTube and distributing through Facebook, although the station remains and often plays old content.

Within the past few months, RVP has changed its name from Rice Television and made a subsequent shift in its programming. Huang and Treasurer Jeremy Kao previously told the Thresher (see “RTV rebranding reveals excess in rollover funding” in the Nov. 18. 2015 issue of the Thresher) that the organization was trying to focus more on producing original content, including experimental short films. Since fall 2015, RVP has released four videos on its YouTube page. Last year, RVP released more than 30 videos. RVP previously filmed student programming events including Senate meetings and cultural shows and occasionally made original short films.

The BTC found that RVP’s transition, done without polling of the student body, violated a central blanket tax organization criterion by not benefiting all students and the Rice community. Chilakapati said the BTC does not take issue with the method of delivery via YouTube and Facebook instead of television broadcasting, but is concerned with the content.

Chilakapati and Thomas cited view counts as evidence of the popularity of cultural and student programming content, stating that the most-viewed videos for RVP’s YouTube channel. The BTC conducted an analysis of videos posted on RVP’s own YouTube channel, and of the five most-viewed, four were student events, such as Mr. Rice and Beer Bike. The second most-viewed video, a short satirical comedy entitled “Nod Bods,” had more than 800 views and was produced in fall 2015. According to Thomas and Griffin, this indicated that the best move for RVP may not have been to move away from filming Rice events, which they say more clearly benefits the student body.

However, when RVP conducted its analysis in an official response, it included videos from private users who utilized RVP equipment. In RVP’s analysis, only one of the top five most-viewed videos was traditional student programming (a Mr. Rice promo with more than 1200 views). Former President Rachel Gray said viewer engagement, or how long people watched the video, is much higher for short and comedic videos — as referenced by how 80 percent of their top 25 most-viewed videos are shorter than ten minutes.

Thomas said he agreed the number of views is not an ideal metric of judgement, but the BTC has no other metric available to it due to the lack of formal polling.

“We're not saying that what they're currently doing is not in the student body's best interest, but just [saying] that we don't know,” Thomas said. “It should be sent to the student body to decide.”

The BTC stated that RVP is no longer providing services to the student body for free and is transitioning to a model of charging organizations for filming programming. RVP denies the BTC’s allegation. Martel College junior Josh Masimore, known as DJ Masimore, paid RVP member Max Hassell, a Lovett College junior, to film his musical performance at Esperanza. Hassell produced and edited the video, which can be seen on RVP’s YouTube channel, using RVP equipment. Hassell declined to comment.

Thomas said he did not have a problem with the exchange of money, but took issue with the organization determining its programming based on monetary compensation.

However, Gray, Huang and Kao, a Hanszen College junior, said RVP has never given special preference to paying entities.

“The payment idea came from a desire to provide a supplementary incentive to our members to be able to film more videos with quicker turnaround,” the RVP leadership said. “If the BTC is against our payment idea, then we won’t do it.”

Concerns Not in Violation

The BTC raised several concerns regarding leadership and budgeting, but did not officially find RVP to be in violation, which requires annual infractions. According to the BTC, the change in leadership from Gray to Huang in fall 2015 was improperly conducted without prior notice. However, email records from RVP show that Gray contacted members of the SA Executive Board as early as August 27 with no response. SA Secretary Brianna Singh addressed further inquiries from Huang, although conversations about changing the name and leadership stretched from August to October and were not formally approved until January 2016. A change in SA Parliamentarian in mid-fall 2015 also delayed communication.

The Thresher released an investigation into the organization’s rebranding, as well as issues of excess rollover funding, in November 2015. According to Chilakapati, the BTC found that the budgets that RVP provided to the Thresher were false, with a mischaracterization of what constituted rollover, such that there was little to no actual rollover. RVP also restructured its budget without notification in August 2015, following the BTC’s review in April.

“These violations have resulted in the decision that RVP has not been a good steward of student money,” the BTC stated in its recommendation.

RVP said it had no intentions to violate the new blanket tax rules and acknowledged its lack of communication regarding their budget. Both Chilakapati and Thomas also said they felt miscommunication with their adviser, Will Robedee, created issues with the budget. Gray, Huang, and Kao said their adviser is not a good match, but did not feel RVP should be punished for failing to change advisors.

“There has not been a clear path of how to change advisors,” RVP leadership said.

On Tuesday, Feb 9, Student Media Director Kelley Lash officially became their new adviser and Robedee was removed from his position as the adviser for RVP, but he continues to be the adviser for KTRU. Robedee declined to comment.

Gray said she felt the BTC had begun its investigation due to pressure from the Thresher. According to SA Treasurer Sai Chilakapati, the BTC was not fully aware of the organization’s functional change until the Thresher article was released.

“In no way was this whole process a reaction to a Thresher article in that we wanted to make ourselves look good or correct [a mistake],” Chilakapati said. “For us, it was really an objective look at the organization based on the information that was brought to our light.”

Thomas said he believes RVP could still succeed as an organization producing video content even without blanket tax funding.

“With the new DMC on campus and with funding sources available to regular clubs, they have all the available resources that they would need to thrive as a club without being a blanket tax organization,” Thomas said.

Gray, Kao and Huang said they agreed that if RVP were to lose its blanket tax status, it could continue to exist without student funding.

“Members [could] spend more time and energy focusing on producing content rather than dealing with bureaucratic procedures,” RVP leadership said. “We have found the committee’s lack of consistency and clarity in communication to be very frustrating, so not having to work with BTC would be nice.”

Student Media Director Kelley Lash is also the adviser for the Thresher and a member of the Blanket Tax Committee.