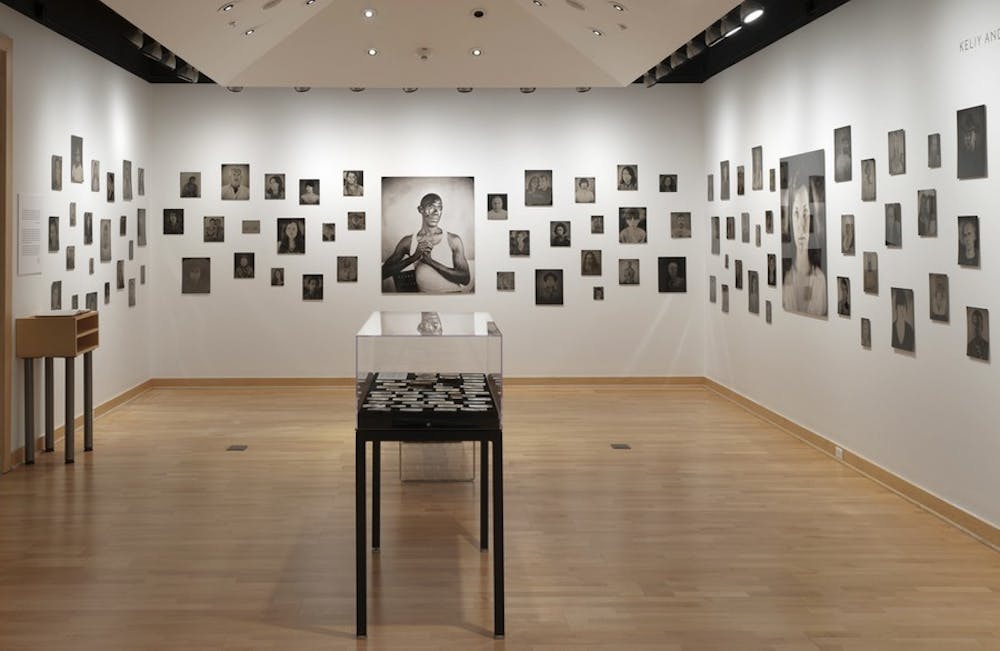 Keliy Anderson-Staley studied photography in New York City before moving to her current position teaching photography at the University of Houston. Her latest exhibition, [Hyphen] Americans, is a decade-long project in the making. It revives the tintype photo making process, a complex 9th century technique that involves taking a photograph as a positive on a thin tin plate. Her project is now on display at the Rice Media Center.

Keliy Anderson-Staley’s photo exhibition “[hyphen] Americans” opened Thursday at the Rice Media Center. The collection of portraits was made using 19th-century photographic techniques and equipment. As an exploration of the variety of American identities, it is well-suited to the context of Houston, often considered one of the most diverse cities in the country.

Anderson-Staley is a photography professor at the University of Houston and has had a long-held fascination with older photographic techniques.

According to Anderson-Staley, the process of making the tintypes is itself an art.

“I think that because the process is challenging, that’s what keeps me interested in using it,” Anderson-Staley said. “A lot can go wrong in shoots in terms of chemistry ... And sometimes, even though I’ve been working with it for a long time, sometimes something can happen one day during a shoot that is a completely mystery and I can’t figure out why it’s happening. Some of that has to do with humidity or temperature. But having a shoot that works out, [during which] you make great images that are all well-exposed and ready to exhibit doesn’t often happen, so when it does happen it can be kind of thrilling.”

The organization of the exhibition does excellent work on the emotional experience of the viewer. The Media Center’s open, light-filled lower floor features several large inkjet prints made from scans of the tintypes. Upon entering this room there is an instant sense of vulnerability. The size and intimacy of the portraits make one a tad self-conscious, as most of these subjects look straight into the camera, and consequentially straight at the viewer. However, this vulnerability goes both ways: The amount of detail in the photographs means that one can see each wrinkle, blemish and scar. The detail also creates an illusion of closeness, as if you’re standing only a few inches away from the subject’s face.

Upstairs are dozens of eight-by-10 tintypes, the space gets smaller, and the sense of intimacy is maintained. Here the primary effect is an impressive sense of human diversity. The subjects include people of many different races and ethnicities, economic backgrounds, ages, dress and gender presentations. Some smile into the camera, others look meekly away and others still give a tough, defiant stare.

As a whole, the collection of photos has an overwhelming sense of warmth. Aside from portraits of individuals, the exhibition includes tintypes of families, friends and couples, whose relationships can be derived only from the way they pose together. The pieces are also pleasantly anachronistic. The wet plate collodion tintype process’ resulting messy edges and color palette don’t feel like they belong in this century, which clashes with the modern dress and diversity of the photographs’ subjects.

Part of Anderson-Staley’s inspiration for this series is the history entrenched in the wet plate collodion tintype process.

“One of the reasons I use this process is because I think that history is automatically embedded in it because a lot of the images look like historic images,” Anderson-Staley said. “I’m interested in seeing how we perceive people through photographs and how photographic technology has shaped our ideas of people ... I’m interested in exploring that and also making sure that I don’t add to the problematic history of how photography was used to label people or put people into categories.”

The diversity of subjects is due in large part to Anderson-Staley’s desire to have as many different subjects as possible.

“I shoot anybody that will agree to sit for me,” Anderson-Staley said.

Subjects have included friends, family, students and people she has met during shoots at non-profit institutions such as the California Museum of Photography. The only information offered about the individuals in her portraits is the subject’s first name as the title of each photograph, so that people can confirm whether or not they know the subject. The Rice Media Center doesn’t even include the titles, and this anonymity places a common humanity before anything else.

Anderson-Staley isn’t done with “[hyphen] Americans,” a project which has already been going on for over a decade.

“I’m just really curious to photograph as many different people as I can, from different places in their lives,” Anderson-Staley said.

Keliy Anderson-Staley’s “[hyphen] Americans” will be on view weekdays at the Rice Media Center from 11 a.m. to 5 p.m. until Feb. 19.