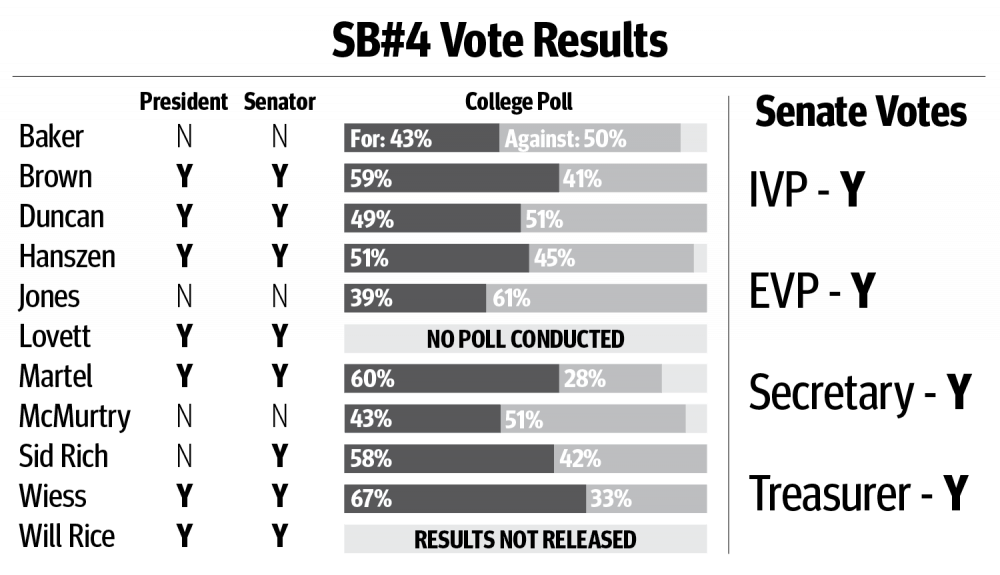 The Student Association Senate passed Senate Bill #4, creating a task force charged with developing a mandatory Critical Thinking in Sexuality course for new students, by a 19-7 margin at the Nov. 11 Senate meeting.

Before voting on the bill, the Senate approved an amendment requiring Senate approval of additional members of the task force, whose first five members were named in the legislation. SA President Jazz Silva, who proposed the course to combat campus sexual misconduct, will chair the task force.

“I’m very excited,” Silva, a Sid Richardson College senior, said after the vote. “That was awesome — we have a lot of work to do.”

The course proposal will be presented to Faculty Senate, who will make the ultimate decision of whether the course is implemented and made mandatory. The course’s details will be developed by the task force with Faculty Senate, the Provost’s Office and the faculty and students of the Committee on Undergraduate Curriculum, according to the bill. Silva said she hopes the course will be approved in time for it to be ready for next fall’s new students.

After its original presentation to the SA Senate on Oct. 28, Brown College President Tom Carroll introduced an amendment to the bill calling for Senate approval of the course once it is developed in addition to the initial vote creating the task force. In its final form, Carroll’s amendment states that the task force must “present details of the course for Senate support through voting procedure” once the curriculum has been outlined. However, the outcome of this vote would not have legal effect on Faculty Senate’s final decision.

“Part of the reason why students felt they could not support the course was they felt the way the task force was created was unfair,” Kapp, a sophomore, said. “From someone who doesn’t know what’s going on inside student government, it just seems like it’s all being controlled by one sector.”

The Senate approved the amendment almost unanimously, with only Lovett College President Griffin Thomas voting against it, then moved on to voting on the overall bill. Kapp said the amendment helped prevent procedural concerns from dragging down the proposal itself.

“The goal of this amendment was just to alleviate those concerns so that we can talk about the actual bill, and what it is and what it isn’t, and not just focus on some procedural worry that people have,” Kapp said. “[Also, the task force] should be as representative as possible of the diversity of opinion that we have here at Rice.”

Sid Richardson Senator Justin Onwenu said he and Schmidt agreed to split their votes to reflect the divided opinions at their college, where 58 percent said they supported the class and 42 percent said they opposed it in a non-mandatory survey.

“Other colleges [voted such that] the majority won out,” Onwenu, a sophomore, said. “We just thought it would be a better idea to split the vote that way to be equally representative. There were more ‘no’s than we anticipated, so we just thought giving them a voice would be helpful.”

McMurtry President Elizabeth Finley said she and McMurtry Senator Mishi Jain voted against the bill after a slight majority of their college’s survey opposed the proposal.

“These responses, along with our concern regarding how rushed the process was and the SA’s minimal communication with relevant stakeholders, caused us to vote against SB#4,” Finley, a senior, said in an email sent to McMurtry members.

Finley said she and Jain personally supported the concept of a sexuality class for all students.

“Though we feel that education is extremely important, we want to ensure that this initiative is done thoughtfully,” Finley, said in the email. “We felt that it was imperative to vote how the college wanted us to vote, regardless of how that may or may not have conflicted with personal views.”

Hanszen College President Angela Masciale, in contrast, said she voted in favor even though Hanszen’s poll was almost evenly split. Masciale is one of the task force members named by the bill.

“Hanszen [is] about 300 students,” Masciale, a senior, said. “And 100 voted. So if you’re [trying to be] completely representative, you can’t, because two thirds didn’t even vote.”

Masciale said comments from the Hanszen survey showed that much of the opposition was due to logistical concerns or misinformation.

“A lot of what was negative was very mis- and ill-informed,” Masciale said. “There was a post that said, ‘They should do another survey of sexual assault of only the penetration because I think unwanted kissing and touching isn’t sexual assault.’ That’s obviously wrong. That is sexual assault.”

Hanszen Senator Olivia Hsia said fears of the Faculty Senate disregarding student input when approving the developed course are unfounded, even if the SA Senate does not have the power to actually reject the final product.

“If there’s something in there that we don’t like and are not receptive of, then if we — the Student Association and student body — pool our support, I firmly believe the class will not come forward,” Hsia, a junior, said. “There is historical precedent that Faculty Senate has only done these initiatives because the students had wanted it.”

Thomas said he voted for the overall bill because he supports the underlying proposal of a mandatory sexuality class.

“Procedurally [the bill] became problematic throughout the debate, but I’m glad that ultimately students put the sexual well being of the campus first,” Thomas, a junior, said.

Masciale also said she voted yes because she supported the proposal’s spirit, even if she disagreed with some aspects of its implementation.

“I was very surprised that there was such a backlash against [SB #4],” Masciale said. “It’s all in good spirit. It’s not to make anyone feel like they are cornered or that their voice isn’t heard. It’s about tolerance of people from different backgrounds. That’s why we have this vote of the spirit.”