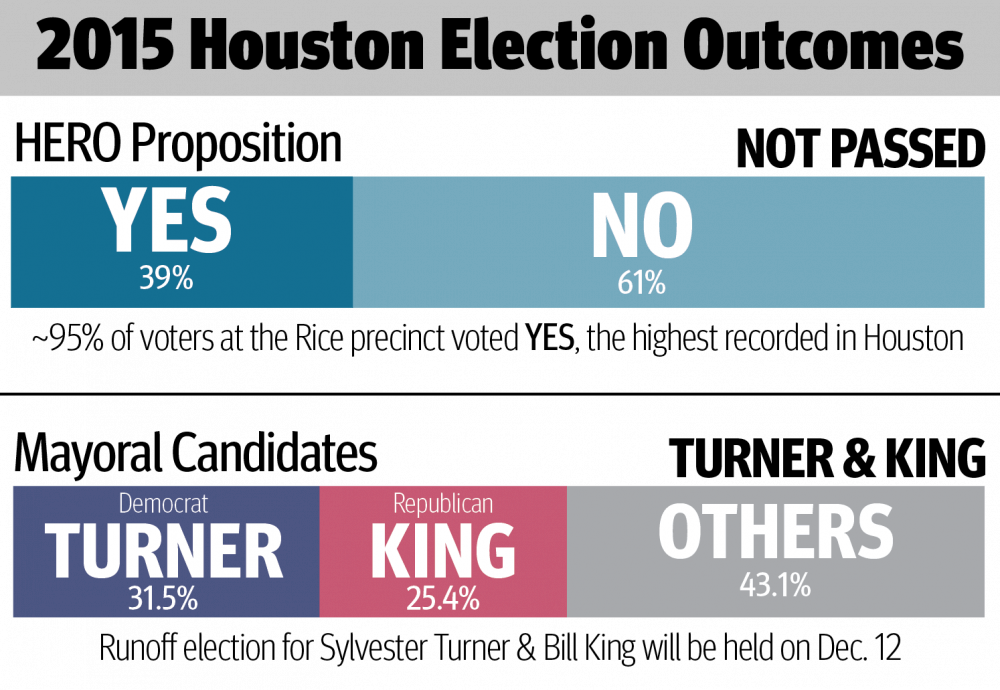 The Houston Equal Rights Ordinance, a proposition to guarantee various anti-discrimination protections, was voted down by a significant majority in the Nov. 3 election. In the mayoral election, out of a field of 13 candidates, Sylvester Turner and Bill King gained enough votes to advance to a runoff election to be held Dec. 12.

Turner, a Democrat, won 31.5 percent of the mayoral vote and King, a Republican, won 25.4 percent, according to the Harris County Clerk’s Office. At 16.8 percent, Democrat Adrian Garcia was the only other candidate to capture more than 1/10 of the vote. Proposition 1, supporting HERO, was defeated 61 percent to 39 percent.

HERO, a measure initially passed by the Houston City Council in 2014, prohibits employment, housing and public space discrimination based on 15 characteristics including race, marital or military status, sexual orientation and gender identity. The final two were additional protections beyond what is already established by federal law.

After HERO opponents submitted a petition to the city against the ordinance, legal challenges ensued that culminated in a ruling by the Texas Supreme Court requiring Houston to either repeal the law or include it on the election ballot. The campaign surrounding Tuesday’s vote gained state and national attention, including comments in favor of the proposition by President Obama.

According to the Houston Chronicle, Rice University had the highest percentage of voters in favor of HERO of any precinct, with nearly 95 percent of voters at the Rice Memorial Center polling station voting yes. However, Rice had relatively low turnout at 25 percent.

Austin Bae, a voting liaison, said many Rice students focus on larger elections such as the presidential contest instead of local decisions.

“It seems that university students mainly focus on the ‘bigger’ elections,” Bae, a Jones College sophomore, said. “I think a lot of students nationwide forget that there are many other opportunities, in some case, necessities, to participate in elections that are crucial to making that presidential election actually mean anything.”

“[King] addresses the biggest problems for Houston [the pension crisis, crime and the state of the roads] with effective plans,” Herrera said. “He would bring a new vision to city hall in that he is a businessman and not a career politician.”

Turner has served in the Texas House of Representatives since 1989. Sid Richardson College sophomore David Cirillo, an intern with Turner’s campaign, said Turner’s experience on the House’s appropriations committee would help him deal with Houston’s debt. Cirillo also pointed to Turner’s support for HERO.

“Integration and equality are tenants of who Sylvester Turner is, and his policies reflect that,” Cirillo said. “King is opposed to an equal rights ordinance. He is for a Houston in the past. Houston can’t go back. It needs to move into the future and prove that it is the city of true opportunity. It needs Sylvester Turner.”

“Even after hearing the results, even after talking to opponents, I still can’t process that so many people were against HERO,” Hokamp, a Martel College senior, said. “It’s extremely eye-opening to the amount of prejudice toward LGTBQ people in this city. HERO was a bill that should have helped everyone.”

Hokamp, who served as Queers & Allies president last year, said the reason for HERO’s defeat was opposition to transgender rights. Campaign for Houston, an anti-HERO organization, widely distributed advertising during the campaign alleging that HERO could allow men to pose as transgender women in order to gain access to women’s restrooms.

“When the opposition to HERO became about bathrooms, it became about transphobia,” Hokamp said. “We live in a hugely transphobic city, and the election results confirm that in a scary way.”

The successful opposition to HERO has caused Hokamp to rethink plans of staying in Houston after graduation.

“I’ll probably end up leaving Houston because I am tired of hiding my sexuality and gender identity in professional contexts,” Hokamp said. “In Houston, any of my employers could fire me if they find out I’m gay or genderqueer, and Houston voters made it that way.”

Cirillo, who is also the campus leader of pro-HERO organization Houston Unites, said he believes the vote does not reflect Houston’s values.

“Houston turned out based on fear and based on lies, but I know Houston does not value discrimination,” Cirillo said. “Equality is a Houston virtue and it will not be ended by a vote of ignorance.”

Cirillo said he is confident another version of HERO would be introduced to the City Council.

“Thank you to every Rice student who voted,” Cirillo said. “I know, with the support of every Rice student, that an equal Houston will soon become a reality, regardless of any vote tonight that may say otherwise.”