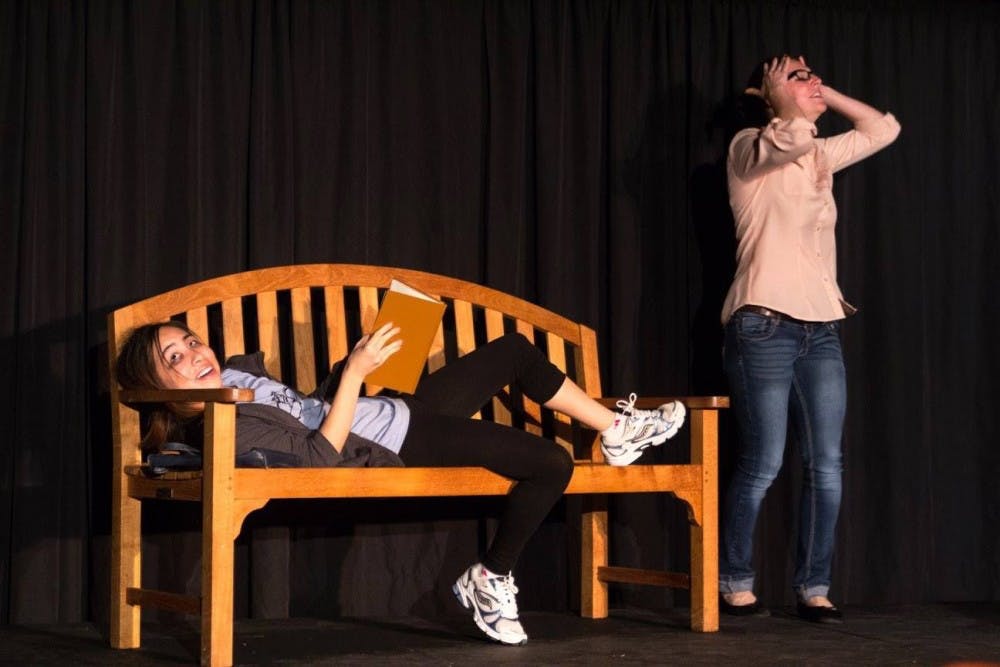 An improvisational comedy show, a one-act play, a short story and a theater revue all have something in common: They seek to entertain in a short period of time. In an improv show, the hilarity of a constructed situation is constantly exploited; in a one-act play, constraints on length keep the action moving for the play’s duration; in short stories, the plot is often structured like a joke, with tension building to a punchline. For theater revues, however, there is no set structure. Consisting of scenes from different plays, revues are naturally somewhat eclectic and should have a unifying theme of some kind. Taking into account that loose dictum, those who put together a theater revue still have the entire catalogue of theater to choose scenes from. The ability to select scenes that work well in the format of a revue is in large part what separates directors of enjoyable theater revues from directors of more mediocre productions. Unfortunately, Hanszen Theatre’s “Benchmark: A Theatre Revue,” directed by Hanszen College junior Rachel Buissereth, is marred by an absence of this selective ability.

The intended theme of “Benchmark” is, somewhat cheekily, the very bench that its title suggests. A bench, however, is not enough of a unifying idea to tie together “Benchmark,” which is for all intents and purposes a mixture of scenes whose emotional tenor and content do not in any way flow. The revue begins with a scene from “Blondes” dealing with gendered experiences on college campuses, transitions all too quickly into a monologue about 9/11 and from there proceeds through scenes dealing with marital strife, prostitution, dystopian technocracy, the death of a loved one and a terrible first date. No scene prepares you for the experience of the next, and the jarring experience of transitioning from the screaming of a woman fighting an oppressive society to a mellow, contemplative song about past love is very confusing. It is worthwhile to note here that each scene in the revue has its own director, which may contribute to the lack of cohesion.

Beyond its issues with scene selection and tone, “Benchmark” also suffers from a lack of effective emotional acting in its non-musical scenes. In every scene involving anger or intense emotion, the cast suffers from the common misconception that yelling or speaking loudly is equivalent to expressing strong emotion. The acting in other scenes of “Benchmark” was also somewhat flat and stilted across the board. In “Blondes,” Jones College sophomore Kevin Mullin and Baker College freshman Sriparna Sen are supposed to be engaging in a discussion about sexuality, but the scene comes off as two people giving individual monologues. The actors’ confident tones do not match their self-deprecating words. A similar effect occurs in a scene from “Closer,” where a conversation between Hanszen College senior Thomas Weinlandt and Baker College senior Katherine Gunn about the beginning an affair feels so cold and impersonal that they might as well be discussing the bench behind them.

By far the best parts of “Benchmark” are the musical numbers. From the opening ensemble performance to the finale taken from “Rent,” the singing in “Benchmark” is phenomenal and powerful. Not only are the singers talented, the combination of live accompaniment and simple direction lend these musical scenes an emotional depth not matched in the remainder of the revue. Hanszen freshman Abigail Panitz singing “See I’m Smiling” and Wiess College junior Helen Gunn singing “I’ll Be Here” are notable standouts in this regard, as both women clearly understand what they are singing and convey their messages well in the minimalist setting.

It is my hope that in the future Hanszen Theatre will spend more time directing such singing and less time on the influences that led to the underwhelming remainder of “Benchmark.” In broad strokes, this would involve more contemplative, understated acting and a focus on scenes that go well together and deliver a cohesive, effective message. A more substantive theme would have improved “Benchmark,” as well as the choice of fewer scenes involving raised voices in exchange for more complex, realistic emotional situations. Future theater revues could also benefit from the incorporation of additional musical acts, as there seems to be plenty of unexplored talent in this area.