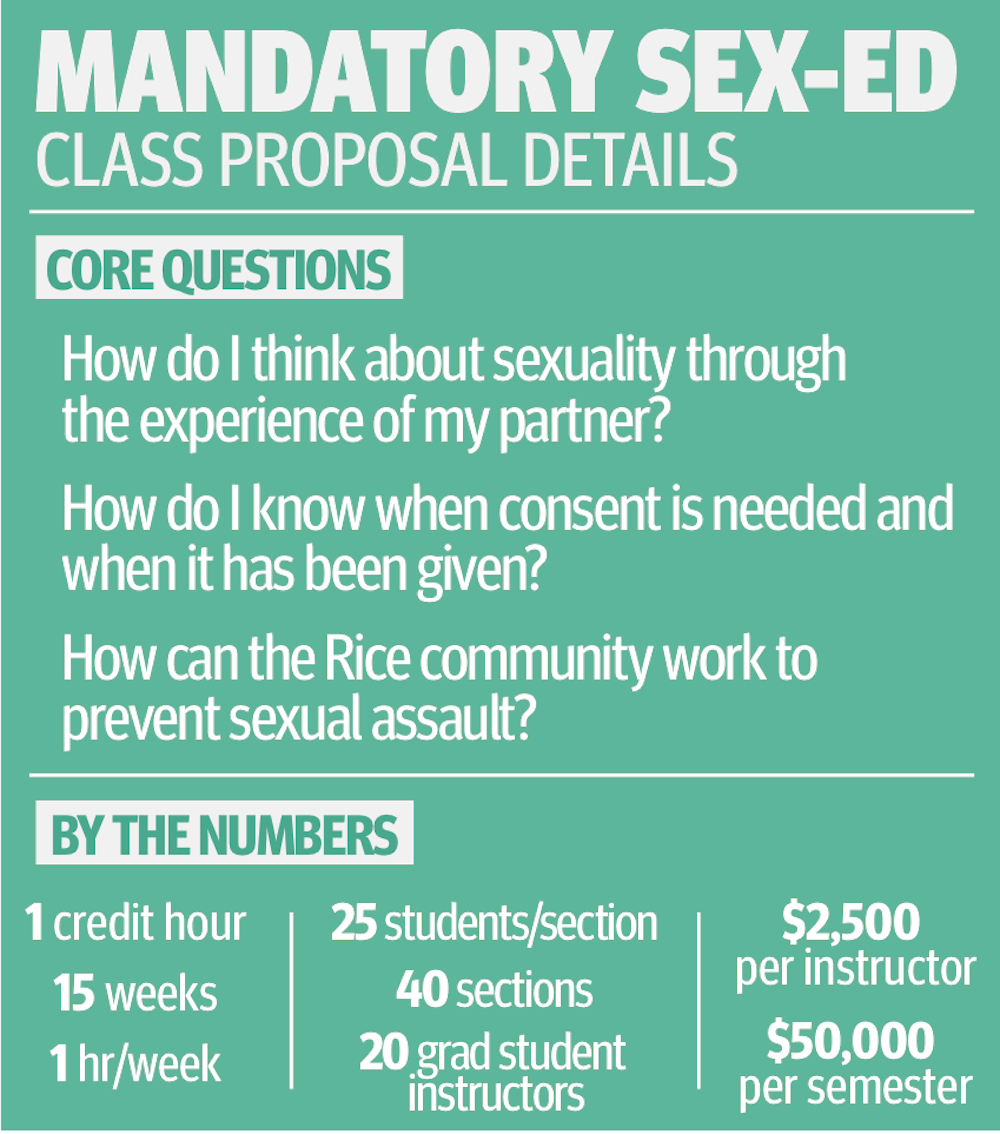 Rice University Student Association President Jazz Silva has proposed a mandatory sexual education class for first year students starting next year as a measure to reduce the prevalence of sexual assault on campus.

“There’s a huge, huge lack of sexual education,” Silva, a Sid Richardson College senior, said. “It’s like, ‘How are we not all on the same page?’ Well, we’ve never talked about it.”

According to Silva, the idea grew out of campus dialogue regarding sexual misconduct following the release of the Survey of Unwanted Sexual Experiences results. 24.2 percent of female and 7.4 percent of male undergraduates responding to that survey indicated they have had at least one nonconsensual sexual experience at Rice.

Silva said her proposal will provide continuing education for first year students and help develop community values regarding sexuality. She said the proposal is a starting point for further discussion, and she expects revisions to incorporate student feedback.

“What I want students to be talking about is the spirit of the program,” Silva said. “Not to get weighed down by the details and the particulars and the numbers. We can’t risk doing nothing.”

Silva’s current proposal calls for new students to be required to attend a weekly discussion during their first semester at Rice. Each section of the class, tentatively entitled “Critical Thinking in Sexuality,” would be capped at 25 students and taught by a graduate student from the Study of Women, Gender, and Sexuality department.

Silva said each week’s discussion would focus on a different relevant topic in an effort to actively engage students in establishing common values and norms pertaining to sexuality. She said the course would also play an educational role, reducing the differences in high school sexual education students have experienced.

According to Silva, the scope of the course would be far beyond simply anatomy. The class would focus on three guiding questions: how students view sexuality through their partner’s experience, when consent is needed and how it is given and how Rice’s community can prevent sexual assault.

Under Silva’s original proposal, students would be given letter grades based mainly on attendance, but she said a satisfactory/unsatisfactory grading system would also be a valid option. There would be no homework, but failure to attend the course throughout the semester would result in a failing grade. Silva also put forward the possibility of having two sections of the class focused on LGBT sexuality, which any student would have the option of taking.

Silva said she proposed that all sections of the class take place in the fall semester, unlike First-year Writing Intensive Seminar sections, because most incidences of sexual assault occur in the fall; according to Silva, September is the most dangerous month with regards to frequency of assault.

Silva’s proposal calls for SWGS graduate students to each receive a stipend of $2,500 to teach two sections each, making the total cost $50,000 a year to implement 40 sections accommodating all new students. Silva said graduate student instructors would not only be a cheap option, with the total cost of the program being less per year than the cost of hiring one new faculty member, but also would encourage student participation.

“There is an inherent generation gap between full-time faculty and students, and there’s not going to be the openness of conversation if you’re talking to somebody who one day might have to write a recommendation,” Silva said. “Are you going to talk about your experiences or underage drinking? You’re probably not.”

Silva emphasized there would be no exceptions to the mandatory nature of the course, including for religious reasons. She said she is working with the Wellbeing Office to determine how to best accommodate survivors of unwanted sexual experiences for whom particular discussions could be triggering, but that a general option to opt out would not be offered.

“This is not a vulgar course,” Silva said. “But if you can’t talk about sexuality in an adult context, I think that’s a problem. If you’re religious, you bring a very diverse perspective to the table, but you still have to be a part of the conversation, because you’re still part of the community.”

Silva said she began to develop her proposal after the release of the SUSE results based on students’ call for education on sexual issues beyond the Project SAFE and Wellbeing sessions of Orientation Week.

Pushing students beyond their comfort zone is necessary to encourage growth, Silva said.

“Students always complain, ‘We’re making everyone so comfortable all the time,’” she said. “I agree. A fair amount of discomfort contributes to personal growth, and in this situation we can’t afford to do anything else.”

Silva said she developed the proposal with input from Graduate Student Association President Lynn Fahey, and has reached out to student sexual assault working group STRIVE, the Rice Women’s Resource Center, Wellbeing and administration figures such as Dean of Undergraduates John Hutchinson for feedback.

Cristell Perez, one of the directors of the Women’s Resource Center, said she believes the course will give students the chance to explore their beliefs regarding sexuality and related topics. She said it was important that the scope of the course include more than just sexual assault.

“The promotion of it must include its other aspects of healthy relationships, consent and human sexuality,” Perez said. “In addition to sexual violence, intimate partner violence is a must to discuss. A standardized LGBT-inclusive course should be taught to everyone, no matter their sexual orientation.”

“Jazz [Silva] has taken a great leadership role in organizing the students to assemble these recommendations,” Hutchinson said. “Correspondingly, I can see Rice taking a leadership role nationally in significantly improving the environment and the experiences of our students.”

Silva also said Rice would lead the nation in requiring a sexuality class, which no other college in the country has done.

“It’s very important for Rice to use this as an experiment, so that if it works other universities can implement it,” she said.

Silva said surveys and possibly class essays would be used to evaluate the effectiveness of the course if it is approved.

Silva said she plans to submit legislation to the SA supporting the proposal, which will ultimately go to Faculty Senate for approval if student feedback is positive. She hopes to begin the class for students matriculating in fall 2016.

Silva said she was optimistic about the implementation of her proposal or a similar program.

“If we want this, it will happen,” Silva said. “It’s never been done before, but it’s not a long shot.”