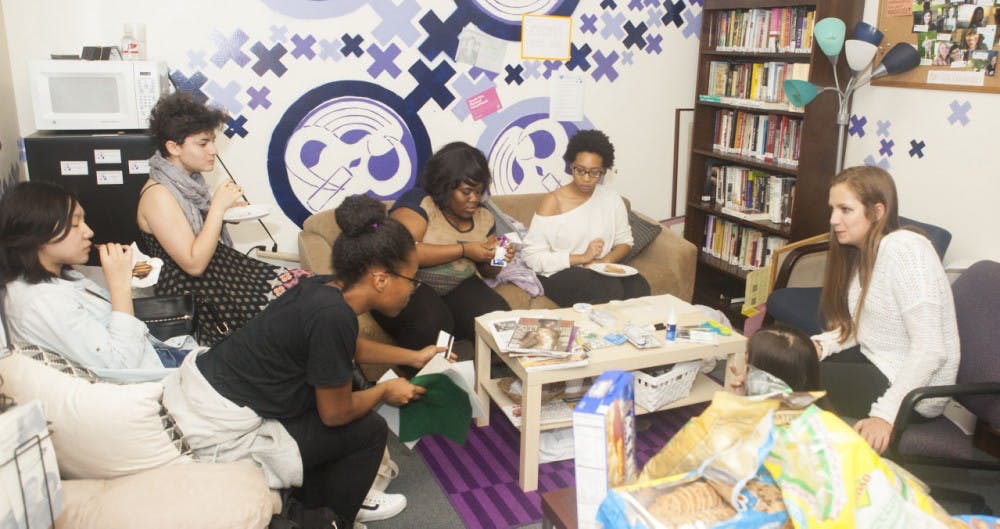 
Duncan College freshman Elana Margosis, Hanszen College senior Khadijah Erskine and McMurtry College freshman Brielle Jackson work on NOD costumes as part of  the I <3  Consent Week kick-off. This was the first of a series of events to promote the importance of consent, including a Q&A panel, bystander intervention workshop and breathing room tent at NOD. I <3 Consent Week is taking place Oct. 26-31.

The Rice Women’s Resource Center is celebrating its seventh annual consent awareness week with a new name, “I <3 Consent Week,” in place of the previous “Consent is Sexy Week.” The week’s events include a Q&A panel and a consent-positive erotica reading.

RWRC Co-Director Sam Love said the name change has been planned since last spring, though it coincides with campus discussion about the recently released results of the Survey of Unwanted Sexual Experiences. According to Love, a Lovett College senior, the event was called “I Heart Consent Week” in the early 2000s.

Love said the name is being changed to emphasize that consent is necessary, rather than trivial.

“We found the term ‘consent is sexy’ to be problematic in a lot of ways, as it implies that consent is sexy — it’s sexy, but it’s a required part of sex,” Love said. “We wanted to make it really clear that sex without consent is rape. We’ve been paying a lot of attention this year to the way language embeds certain ideas that we don’t want to perpetuate.”

“[RWRC Co-Director] Cristell [Perez] and I agreed that we were going to go ahead and change it [this year],” Love said. “It’s a new term, but it’s also going back to what it used to be.”

“I think it’s a great move,” Bice said. “The idea of consent shouldn’t have to be seen as sexy to be viewed as important. I think the goal of [the change] is positive, and it comes at a good time after the results of the sexual assault survey were released.”

“After the recent survey results, consent will be talked about a lot more than just the week before NOD,” Skeslien-Jenkins said. “Changing the name shows consent is always important.”

“Language itself can do a certain violence,” Love said. “Only giving credit to certain experiences, giving a certain gendered notion to who educates people about sexual things. That was the reason behind the change, because we have to recognize that it’s not your mom’s job.”

This year, I <3 Consent Week will include a new, consent-focused erotica reading on Thursday night.

“A lot of people have these negative stereotypes about the week, thinking that’s it’s a bit prudish,” Love said. “It’s consent erotica, it’s erotica and literary pornography that has affirmative consent embedded in it. [It’s] trying to get this idea out there that asking someone for consent isn’t interrupting your sexual experience.”