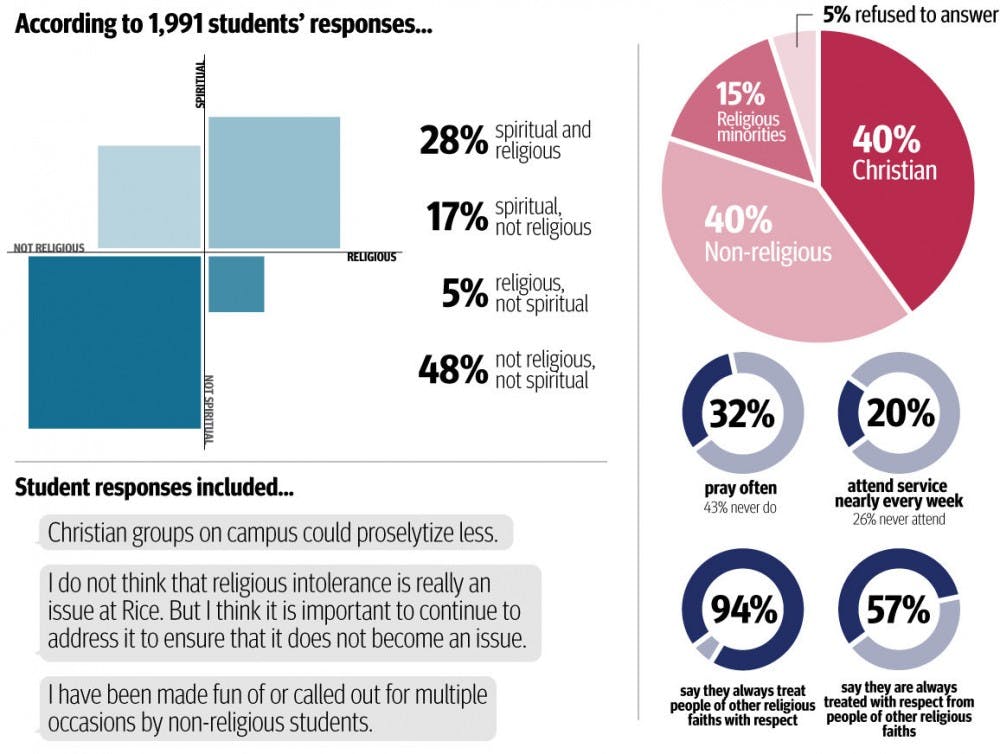 Rice University’s Boniuk Institute released the results of a campus-wide survey of undergraduates about religion and religious tolerance at a presentation last week.

According to Johnson, the survey was the first thorough effort to understand religious diversity at Rice. Johnson said the impetus for the study was donor and founder of the Boniuk Institute Dr. Milton Boniuk.

“[Boniuk] was really eager to gain a better understanding of what’s going on [at Rice], because it’s sort of seen as a very diverse and tolerant place,” Johnson said. “So let’s look below the surface and see what’s really going on.”

Johnson said many of the survey’s results were expected, such as the fact that religious students had more positive feelings toward their own religions. However, she also said the study led to some important conclusions.

“Understanding where tensions are on our campus will help inform a more productive dialogue around religious tolerance,” Johnson said.

According to a presentation of the survey’s results given by the Boniuk Institute last Thursday, Rice’s student body is dominated by two main groups: Christians and the non-religious, each of which makes up approximately two-fifths of the population.

According to Lovett College sophomore and Junior Interfaith Week Coordinator Bridget Schilling, many students see a divide between religious ideas and their education at Rice.

President of the Rice Muslim Student Association Zaid Bilgrami said he was grateful Rice has a prayer space for Muslims in the Rice Memorial Center, but that more resources are needed.

“I strongly believe that the facilities as they are not sufficient,” Bilgrami, a Baker College junior, said. “Muslims who try to use the room often find themselves unable to use the room for a variety of reasons. … The best permanent solution would be a separate ‘meditation room’ that Muslims at Rice can use for their daily prayers.”

According to Johnson, the student population views certain Christian groups most negatively.

“If you look around the world, groups that face discrimination are often in a religious minority, such as Hindus or Muslims or Jews,” Johnson said. “But on this campus, the groups that tend to be the most negatively viewed are Evangelical Christians and Mormons.”

Ecklund said the Boniuk Institute is currently working on spreading awareness of the survey results, as well as creating a report for the administration. According to Ecklund, the study should help spur changes that increase religious tolerance on campus.

“Such efforts could include spearheading events that will foster a dialogue around these issues across campus,” Ecklund said. “We are certain that the student body will benefit greatly from the knowledge we’ve gained through this research and we hope that the survey is a launching pad for future conversations around religious diversity at Rice.”

Bilgrami also said there is a need for further dialogue on religion.

“Tolerance is a low bar,” Bilgrami said. “A deeper understanding and appreciation of other viewpoints is missing from Rice.”