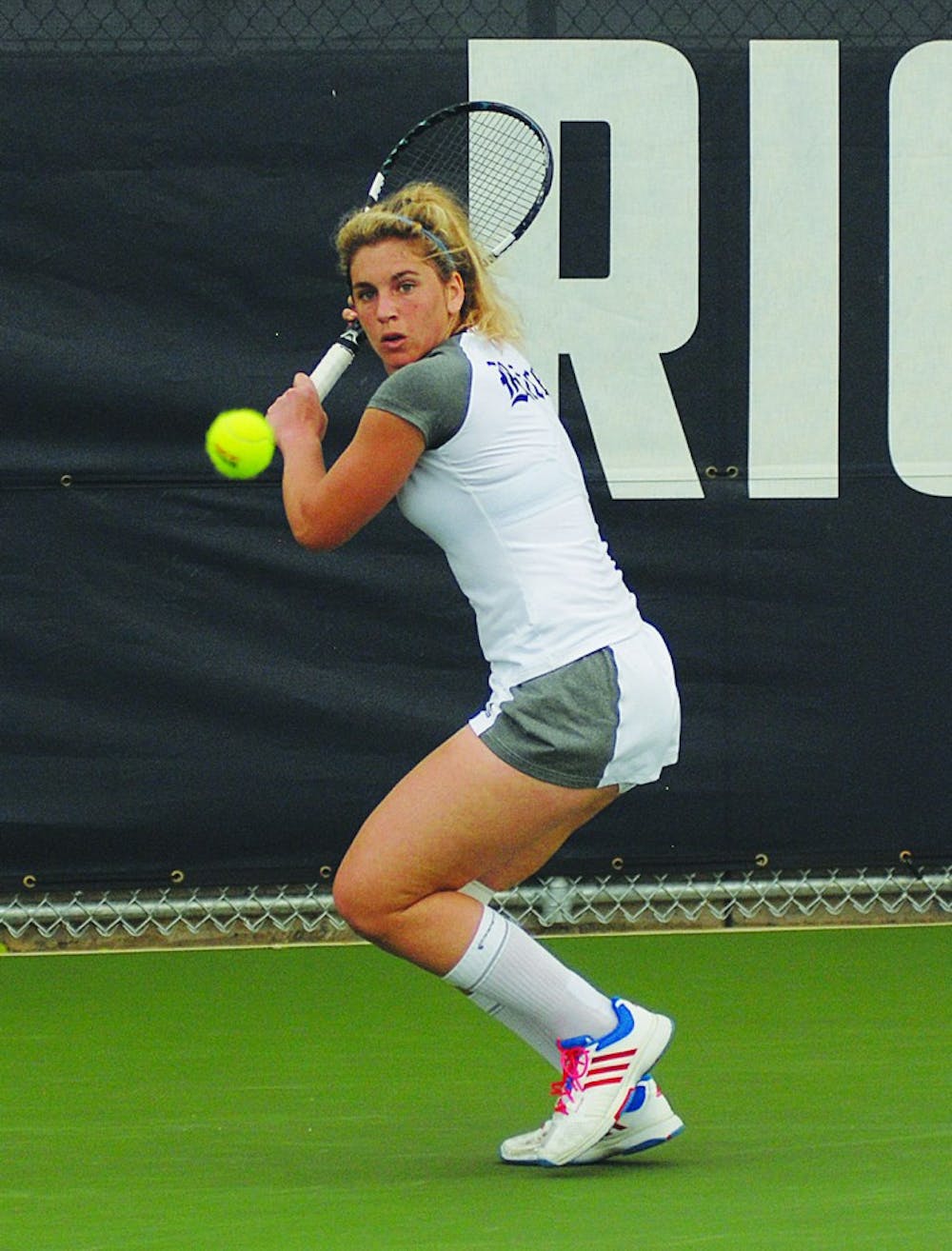 Senior Liat Zimmerman prepares for a slice backhand in a 5-2 win against the College of William and Mary.

Despite winning only four of their first 11 matches, the Rice women’s tennis team has been on a winning streak recently, having won their fifth straight match. The Owls knocked off the No. 34 College of William and Mary 5-2 on Sunday.

The action started with Rice’s doubles pair, freshman Lindsey Hodge and sophomore Alison Ho, winning their set by taking the last two games for a 7-5 finish. The win gave the Owls the doubles point.

When action moved to singles, sophomore Katherine Ip and junior Solomiya Zinko took their matches in straight sets. However, William and Mary charged back to take a 3-2 lead with wins on courts three and four.

The team continued to thrive on the momentum of senior Natalie Beazant, who won her ninth-consecutive match of the season. Beazant beat junior Leeza Nemchinov, coming back from losing the first set 6-7 (5-7) to take the last two sets 6-3, 6-4.

Head Coach Elizabeth Schmidt said the team competed in all situations and was able to emerge from close games and sets.

The Owls will head to Waco, Texas on Wednesday for their second regular-season matchup with Baylor University, who will enter the weekend action ranked No. 6 in the country. The two met earlier in Houston when Baylor shut out the Owls 4-0.

Schmidt said their earlier loss to Baylor may have been the pivotal moment in the season for the Owls.

“I thought the last match we played against Baylor was a bit of a turning point in our season,” Schmidt said. “Even though we didn’t win the match, we seemed to find our footing that day, and we built on some of the things we learned that day.”

According to Schmidt, Baylor presents a difficult home-court advantage but said the team is ready to compete with their in-state rival.

”[Baylor] is always a tough place to play,” Schmidt said. “We’ve lost a few matches to them over the past several years, but I know we’re excited about the opportunity to get out on the court with them again.”

The Owls hope to ride the momentum of the past few weeks and look to even the season series with Baylor this weekend. The match will begin Wednesday, March 25 at 5 p.m. in Waco, Texas.