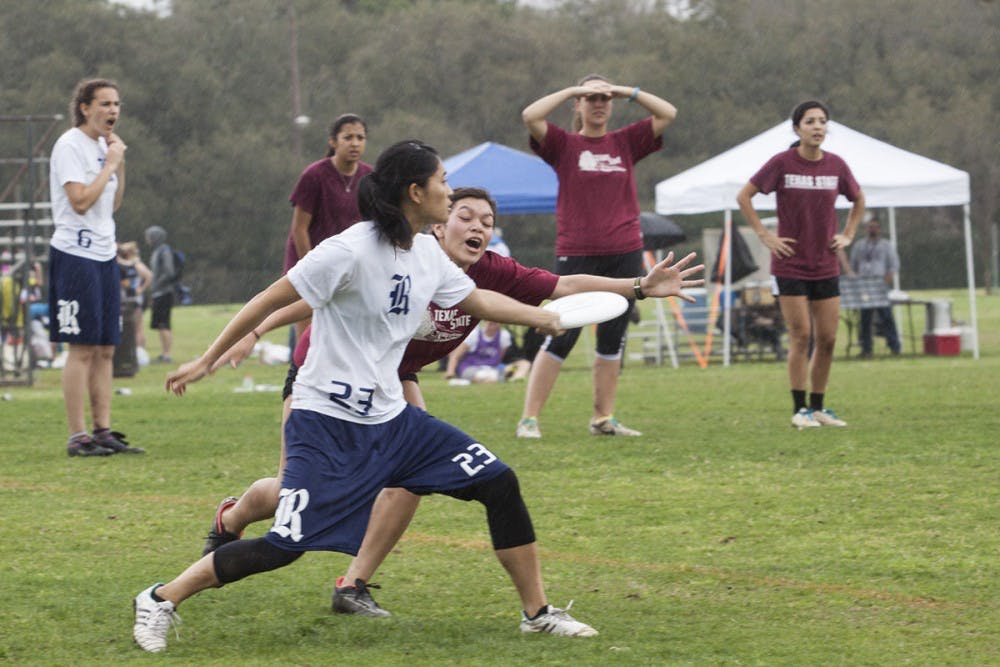 
Senior captain and handler Nichole Kwee looks to pass during a 7-6 victory over Texas State University in the Houston Antifreeze Tournament on Feb. 21. Torque, the women’s club ultimate team, won the Division III championship last year and looks to repeat after winning the Antifreeze Tournament.

Rice University’s club women’s ultimate frisbee team, Torque, competed in and won the Houston Antifreeze Tournament this weekend. After winning the Division III national championship last season, Torque hopes the victory in the tournament is the first step in repeating in 2015.

On the first day of the tournament, Texas State proved to be the hardest match of the weekend. The game was close throughout, going back and forth between the two sides until Rice won on the deciding point, 7-6.

One of the more anticipated matchups for Rice was against the Carleton Eclipse. They were Rice’s opponent last year at the 2014 USA Ultimate Division III College Championship, in which Rice defeated Carleton 15-9. During this match, Rice was able to close the gap with a score of 11-5.

Senior captain and handler Nichole Kwee said the team’s improvement on defense during the second half led to the team’s victory in the championship round.

“We used halftime to really refocus,” Kwee, a Baker College senior, said. “We made adjustments to have smart matchups on their key players and shut down their deep game. The whole team really stepped it up on defense.”

The team hopes to continue with their dominant play and hopefully repeat at this year’s College Championships as well.

According to senior deep Erika Danckers, the team’s season goal is to perform to the best of their ability, even if it means not repeating as champions.

“I think there’s a lot of success that can’t be defined by winning or losing at a tournament,” Danckers, a Hanszen College senior, said. “My goal for the team this season is to reach our full potential as a group and really learn to play well with each other.”

Danckers said she hopes to see the team improve over the next few years and possibly advance to higher levels of competition.

“I hope to see our program continue to grow in size and increase our level of play,” Danckers said. “It’d be amazing if in five to 10 years from now we can support multiple teams that are competitive at both the [Division I] and [Division III] level.”