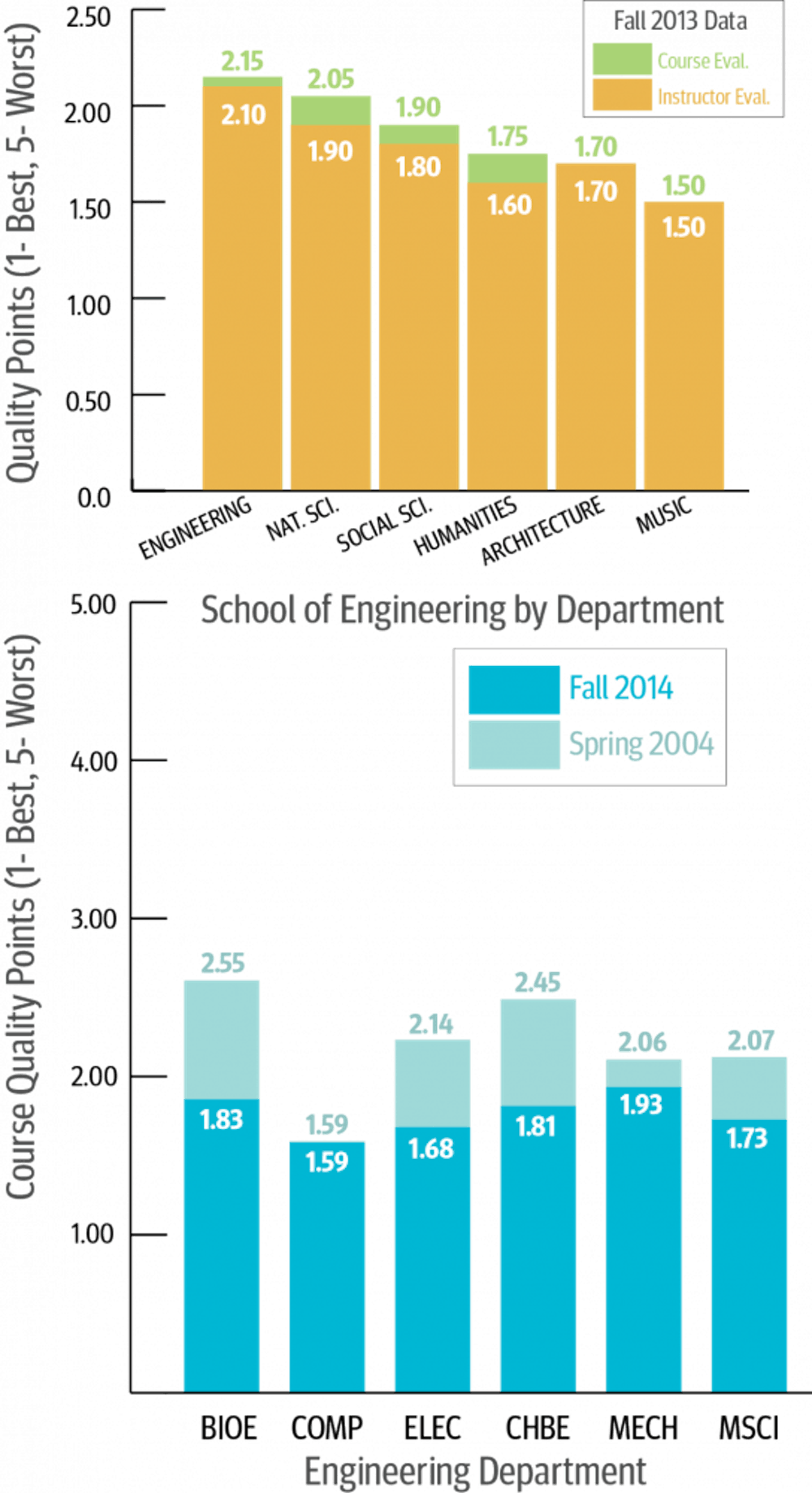 Course evaluations have improved on average for all academic schools at Rice University since they were first published in 2004, but the engineering and natural sciences departments still lag behind social sciences and humanities in both course and instructor

President David Leebron mentioned the rise in evaluations during his speech to the Student Association on Oct. 1, and the evaluation process is currently being investigated by an SA Senate subcommittee that includes students, faculty and Registrar David Tenney (Sid Richardson ’87).

Course evaluations have been made publicly available since 2004, a development Tenney said is valuable to Rice’s student body.

“There’s a recognition that evaluations serve an important role for Rice students,” Tenney said. “They’re not just for teachers; they’re critical for

Since 2007, all six of Rice’s academic schools have shown improvement in two important measures included in evaluations: average course quality and average instructor effectiveness. Both of these metrics are measured on a five-point scale where one is the best possible response and five is the worst.

The departmental averages have fallen by between 0.1 and 0.2 points since 2007, with the School of Architecture and School of Social Sciences showing the

Despite the advances, a clear difference still exists between the evaluations for the STEM and non-STEM subjects.

Since 2007, the School of Engineering has consistently had the worst or second-worst average course and instructor evaluations, around 2.15 and 2.1 respectively for the fall 2013 semester. This is between 0.3 and 0.4 points worse than the School of Social Sciences, the School of Humanities and the School of Architecture, which are all in the 1.7

The School of Natural Sciences has received evaluations only slightly better than the School of Engineering, standing at 2.05 for course quality and 1.9 for instructor effectiveness for the fall 2013 semester.

The School of Music, on the other hand, has the best evaluations of any division at 1.5 for both metrics, though it has shown the least improvement, about 0.05 points,

However, not all engineering classes or even majors have lower evaluations than other subjects. For example, mechanical engineering and chemical and biomolecular engineering courses tend to have worse reviews than computer science and electrical engineering, which are actually comparable to average courses in the humanities.

In addition to this trend, which holds true across departments, upper-level courses generally have better evaluations than introductory

Dimitri Nikolaou, a  chemical and biomolecular engineering major, pointed to course difficulty and lack of focus on teaching as reasons for the School of Engineering’s worse

“The kids are pushed more, so innately they’re more frustrated because they have to work more,” Nikolaou, a Brown College junior, said. “I feel like more engineering professors are brought in for being research-oriented rather than oriented toward undergraduate

According to Alexandra Franklin, the Brown Senator and a member of the SA Senate subcommittee on evaluations, the SA plans to modify the evaluation process in the future to make it more useful to administration and

“We are currently looking into different options for future evaluations,” Franklin, a junior, said. “The changes will probably take about two years to completely integrate, but everything is pending presentation to the Teaching Committee at large and the Faculty Senate.”

With the changes, Franklin said the SA hopes to continue the role of evaluations as an important tool in the Rice community.

“We want to create evaluations that better serve the students, the faculty themselves and the administration as a whole,” Franklin said.