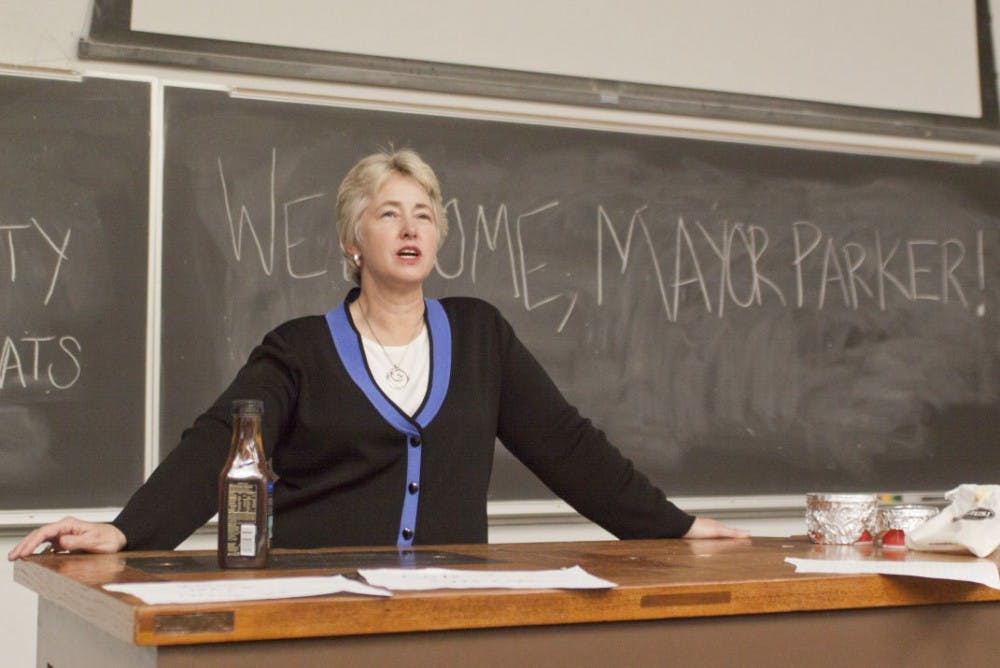 Parker began by highlighting Houston’s international importance and explaining her personal journey and current responsibilities. A Houston native, Parker graduated from Rice with a triple major in anthropology, sociology and psychology. She helped organize the Rice Gay/Lesbian Support Group, the first LGBT campus organization at Rice and the forerunner to today’s Queers and Allies, and was involved in civic activism and the oil industry before starting her 17 year career in Houston politics, which culminated in her election as mayor in 2009.

"My focus was always on local government,” Parker said. “While I voted in national elections and followed politics, my personal involvement in volunteering was at a local level."

Parker also described her governing philosophy, which she said is not to shy away from confrontation over important issues.

"I love kicking over anthills," Parker said. "Afflict the comfortable and comfort the afflicted."

Parker took questions from students on various issues, focusing especially on her efforts to protect LGBT rights in Houston and her views on public education and campaigning.

Parker also addressed the influence Rice had on her career path. She said she was involved in politics at Rice, but it was the basic skills she learned in her classes that were most important for her future.

“I found it awesome because it was really informal and casual, and so she really opened up about her background, her story, and how she really got involved in politics, which was really cool – a lot of politicians don’t do that,” Jain, a McMurtry College freshman, said. “I’ve always been really interested in the state and federal level, so it’s nice to hear from a local politician.”

“I was really impressed by the mayor – I’m from out of state, and I love every chance I get to hear about Houston and how the city works,” Flack, a Duncan College freshman, said. “It’s really interesting hearing about [Parker’s] experiences as a politician and as a policymaker and her experiences as a person in general.”

Vice President of the Rice Young Democrats Griffin Thomas, said spreading awareness of local politics was one of the primary motivations behind the event.

“Having [a] big first event [of the year] was crucial to getting new students – and the campus in general – civically engaged, especially during such a critical and exciting election year,” Thomas, a Lovett College sophomore, said. “I proposed Mayor Parker as the guest for our first event as a way to help welcome and introduce the new students to Houston and bring more attention to local politics, which is often overlooked on campus.”

According to Young Democrats President Clara Roberts, a Duncan College senior, the organization has planned several other events for the coming months, including a voter registration drive with the College Republicans and Asian Pacific Student Alliance on Sept. 23 and a panel with local Democratic figures on Oct. 15.