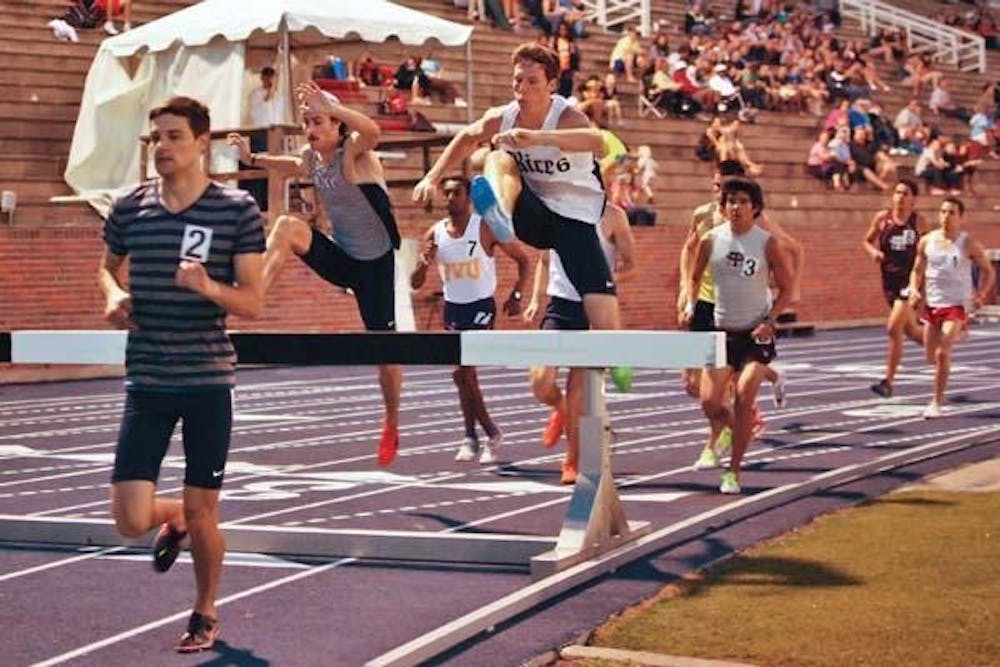 Being Cinderella is overrated. It is a lot more fun to know you belong.

After waltzing its way to its first NCAA Tournament Sweet 16 last year as the third seed in the four-team regional, Rice has spent the latter half of this season showing that lasts year's success was far from a fluke. With only two matches left in the regular season, Rice is arguably playing the best tennis in program history.

The last time Rice University's women's tennis team lost a match was Feb. 17. To put that in perspective, that was before spring break, before Rice swimming won the conference championship and the same weekend baseball opened against Stanford University. It has been a while.

During that time, the Owls have reeled off 10 straight wins and written themselves into the

program's history books. They ascended to the highest national regular season rank in program history, reaching No. 20. They knocked off the University of Texas for the first time ever with a 4-3 win in Austin in a nationally televised match on the Longhorn Network. During the streak, they tackled four ranked opponents: Louisiana State University (No. 54), the College of William and Mary (No. 44), Texas Christian University (No. 33) and UT (No. 29).

It has been an impressive run, but perhaps more exciting than the streak itself is the fact that it has been fueled by the same elements that will be key for postseason success.

The Owls have not lost a single doubles point since the streak began and have only lost three doubles points during the entire season. Along the way, sophomore Natalie Beazant and junior Dominique Harmath have teamed up to reach 16th in the doubles rankings and added a win against a top-five opponent to their resume by upsetting William and Mary's top duo.

Given the quality of the competition the Owls will face in the postseason, earning the early doubles point could prove crucial.

Rice has also seen consistently great singles performances at the top of the ladder.

The team relied on key wins from all six positions, amassing a combined record of

26-2 with two undecided from the top three posts during the streak. Generally, such posts are played by sophomores Natalie Beazant and Liat Zimmerman, junior Dominique Harmath and senior Katie Gater. Beazant is in the midst of a 12-match individual winning streak and is currently ranked No. 62 individually in the nation. Harmath is 8-1 with one undecided in her last 10 matches and has reached No. 72 in the nation. Zimmerman is 8-2 in her last 10 appearances. Gater has continued to be a strong presence in doubles.

During the streak, Rice has proven itself particularly resilient under pressure.

For example, against UT, Rice found itself tied 3-3 with Zimmerman's match in a decisive third set. In that set, Zimmerman fought off four break points only to see the 5-2 advantage she had built turn into a pressure-packed 5-4. However, with all eyes on her, she closed out the set for a historic win.

Likewise, against TCU, Rice was nursing a 3-2 advantage with the final two matches entering third sets. Rice needed to win at least one to secure the victory. It took both.

With the season approaching its climax, Rice will look to continue capitalizing on what has made it so great during the streak in order to make another deep postseason run.

First on the agenda are two final home bouts, one against 51st-ranked conference foe Southern Methodist University this Saturday, then a week later against University of Utah.

After that, Rice will travel across town to the University of Houston in search of its first conference tournament title since 2006. The tournament will feature a challenging lineup for the Owls with three other teams ranked in the top 50 in the field, including 25th-ranked defending champion University of Tulsa, which downed Rice 5-2 on Feb. 3.

If things fall perfectly into place for Rice, it could move into the top 16 and be chosen as a host for an NCAA regional. However, without any upcoming opportunities against top-20 opponents, Rice will not only have to play outstanding tennis, but several top teams will have to falter down the stretch.

Instead, it is more likely that Rice will travel once again to a regional site as the second seed in the region, making it an underdog to reach another Sweet 16.

There will be no need to ride there in a magic pumpkin this year, though. This group has proven that competing with the nation's best is exactly what it does.