Craig rises to occasion in Skyfall 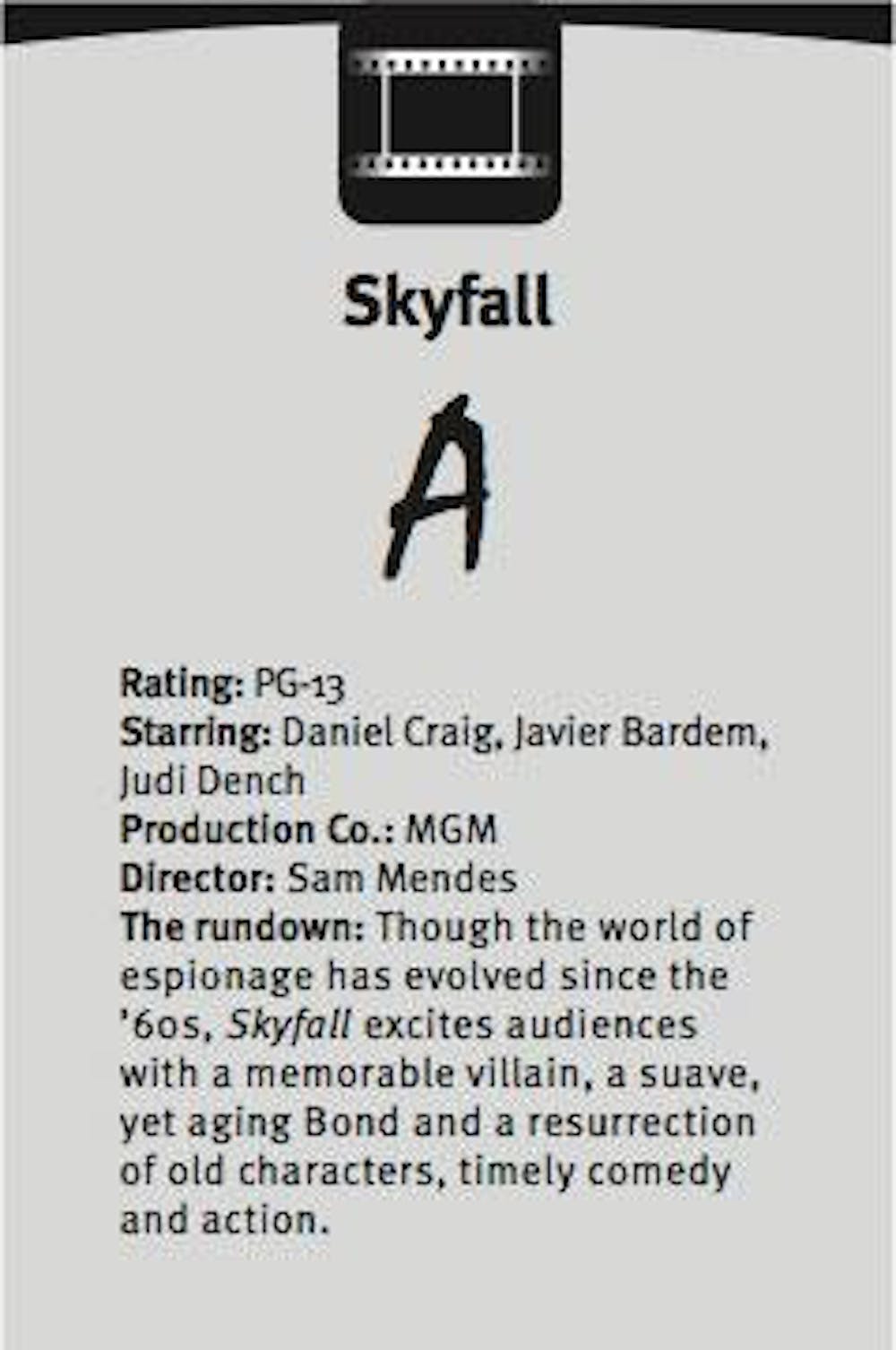 In the middle of the latest James Bond film, Skyfall, the nefarious Raoul Silva (Javier Bardem, No Country for Old Men) meets Bond (Daniel Craig, Casino Royale) for the first time and asks Bond what his hobby is. Without missing a beat, the world's most famous spy replies: "resurrection." It is an excellent response, not simply because Skyfall begins with Bond falling into a river and being assumed dead, but also because Bond has been resurrecting himself for 50 years. Not only are bullets, knives, pits of exotic sea creatures, gargantuan lasers, tarantulas, rocket fumes, bowler hats, footwear, orthodontia, pastry bombs and other items in a veritable smorgasbord of lethality unable to kill Bond, even time itself cannot conquer MI6's most valuable agent. Like Zeus, Santa Claus and the Easter Bunny, Bond is immortal.

While Bond has yet to die, over the years he has had some very close encounters with the end. Sean Connery did an excellent job portraying Bond through all six of his films, but Roger Moore seemed ill-fit for the role. Moore movies such as Moonraker and A View to A Kill rank as the low points in the series, when the '60s-era cool had been replaced with '80s-era absurdity. While there were a few good films after Moore, such as The Living Daylights and Goldeneye, the Bond series never truly recovered from this nadir. At the end of the Pierce Brosnan era, Bond seemed both formulaic and ludicrous. Then came Casino Royale. Craig stepped into the principal role and gave Bond far more savage energy than the spy had in films before. It was a good movie with a great ending that promised even better films to come. Sadly, the next film, Quantum of Solace, did not live up to these expectations. It was not that Quantum of Solace was bad; it just seemed more Jason Bourne than James Bond.

Out of this milieu and history emerged Skyfall, the 23rd official Bond film. Unlike its predecessors, the movie asks whether it is time for Bond to retire. Bond is tired and weak after a few too many near-death experiences. He has trouble with marksmanship, and in one scene in which he is hanging from an elevator, we can see the physical strain of what would have once been an effortless athletic feat. The world of espionage has changed, and cyberattacks make human spies less relevant. The questions about Bond's age and obsolescence apply both to Bond's character and to the series.

Naturally, the film's plot has Bond proving that he is both necessary and able to tackle the world's problems. Similarly, the film demonstrates the series' viability by taking Bond back to his roots. Numerous characters in Skyfall say the "old ways are best," and the movie not only pays homage to the old films by featuring the Aston Martin DB5 from Goldfinger, but also strikes the right comic tone while still taking itself seriously.

The film's success hinges on the quality of the actors. Craig proves he is the second-most proficient Bond actor after Connery with a combination of brute strength and suave charm. Bardem understands how to correctly create a Bond villain by being memorable and insane. Judi Dench (Casino Royale), who has played M since the Brosnan films, is finally allowed to develop her character fully and does a great job playing a brutally efficient if oddly maternal spymaster.

The film is not without its flaws. Some of the plot twists are entirely predictable, and some editing could have kept the film shorter and optimized the pace. Still, the last scene of the film had me feeling more excited than I felt after viewing Casino Royale. Skyfall is Bond searching for his purpose and his soul after years of various iterations and films. When the end credits roll, it is clear that once again, Bond has successfully completed his mission.