Wiess College's annual Night of Decadence garnered attention beyond the hedges this year when outside news reports claimed 11 students were transported to the hospital on the night of the party.

The Texas Alcoholic Beverage Commission is also launching an investigation into whether the vendor that served beer at NOD followed rules and good practices to ensure those served were of drinking age, according to Lt. Tana Travis, supervisor on the case.

Not all of the 11 hospital transports of the night were directly related to NOD, Basgall said.

"There were 11 ambulance transports during NOD, but one of them was not related to the party," Basgall said. "There just happened to be a non-alcohol-related medical emergency during that same time period."

Chief of Rice University Police Department Johnny Whitehead said most of the cases occurred between approximately 12:30 a.m and 1:30 a.m.

"One of the challenges of this year's NOD was that there were a lot of patients at the same time," Basgall said.

Basgall said there were 24 REMS staff members on duty and that they were set up in a classroom at Wiess serving as a first-aid room. Basgall also said two trained professional EMS physicians were on the scene.

According to Basgall, REMS cared for 32 patients total in the first-aid room over the course of the night, in which they assessed patients to determine whether to send them to caregivers, back to their college or to the hospital.

Basgall said the main concern for intoxication cases is obstruction of the airway.

"If they can't lean over a trash can on their own or cough and clear their throat, they could be lying on their back somewhere vomiting, and this could cause an airway problem that could cause death," Basgall said. "That's why people need to go to the hospital."

According to Basgall, if EMS determines that a patient must be sent to a hospital, the hospital would primarily be monitoring the patient to ensure that he or she can maintain his or her own airway. Basgall said that the type of monitoring done in the hospital is not within the scope of practice of either REMS or caregivers.

One of the head caregivers for NOD, Adeola Adegabi, said all caregivers are trained to deal with patients in danger of choking on their own vomit.

"All the caregivers on-duty had been trained prior to the event to know what to do if that was the case," Adegabi, a Wiess College sophomore, said. "If it got to the point that we had to question the safety of the person we were helping, we could call REMS who was just a minute away."

Former REMS In-Charge Jenny Groover said she believes REMS pressures students into being transported to the hospital because REMS feels it is more liable if the patient is not transported.

"Several Rice students have definitely been reluctantly and unnecessarily transported by ambulance to the hospital because they felt compelled by REMS," Groover, a Jones College senior, said.

Groover said that life-threateningly intoxicated patients would likely be intubated and put on a respirator. The patients would then likely have to stay in the hospital for 24 hours after being taken off the respirator, according to Groover.

"If an intoxicated patient was released after a few hours, chances are either no treatments were done, the patient was watched among many other patients as the student sobered up, or IV fluids were given," Groover said.

All 11 students were released from hospitals within a few hours and were back on campus by Sunday morning, according to Dean of Undergraduates John Hutchinson.

Groover, who quit her position at REMS because of disagreements with the organization's leadership practices, now works for a 911 ambulance agency. She said it is general practice for EMS teams to recommend an ambulance transport, but that REMS sometimes pressures patients more than usual.

"From a stubbed toe to a heart attack, all EMS teams always recommend an ambulance because it's the safest mode of transport to a hospital," Groover said. "In the real world, the liability is the same once the patient signs witnessed release of liability waivers, regardless of how much the patient was or was not pressured. There is a difference between informing patients of their best options and constant pressuring."

Basgall said REMS does provide students with this choice.

"We make our best judgment whether they are able to walk without assistance, if they can talk, and if they're not vomiting," Basgall said. "If they can do all of these things and they are oriented and responsible for themselves, then we offer them a refusal of EMS care."

Hutchinson said the administration has begun an investigation into each of the 10 alcohol-related transport cases with help from the college masters.

"One of the things that we know from feedback is that all of the students who required transport had consumed alcohol prior to the event," Hutchinson said.

Hutchinson said he could not comment on any possible policy changes until the investigations into the individual cases were completed.

Hutchinson said he hopes investigations will be completed within the next week.

"The problem that we are concerned about is a lack of healthy behavior on the parts of our students," Hutchinson said. "The party itself was extremely well-organized and quite safe. Rather, it's [other] events prior to the event, where students are choosing to [consume alcohol] in privacy and possibly in violation of policy. The focus of our attention needs to be on those areas."

Hutchinson said respect is is a key factor in determining the alcohol policy's success.

"It is imperative that students respect the policy and abide by it," Hutchinson said. "If they don't respect it, then the policy fails and it must be replaced."

Whitehead also cited a problem surrounding the use of Houston Fire Department resources.

Whitehead said that, of the 10 patients transported from NOD, six were transported by HFD ambulances that had to be called due to the number of transports occurring at one time.

Four were transported by the three private Aemstar ambulances that had been hired for the party, Whitehead said.

Shaunfield said HFD is always willing to to help when needed but cited the importance of resource organization.

"Obviously, units can't be in two places at the same time," Shaunfield said. "This is the nature of our business, and resource management is something that we are always aware of."

RUPD Captain Clemente Rodriguez said overuse of these resources could burden the city.

"You would hope that we could minimize the impact on the city's resources and that the students would take that into consideration," Rodriguez said. "When it's something that could be controlled by just making better decisions, you'd like to see that happen so that we didn't have to call those ambulances."

Hutchinson also said that this issue was important for students to think about.

"One of the things that I hope our students understand is that while we want to make sure that they are cared for once they get into medical difficulty, by making poor choices, they impose on a lot of people," Hutchinson said. "They consume a lot of resources, they take a lot of people's time, and that needs to be discouraged."

The large number of ambulance transports at one time caught the attention of local media, according to Senior Director of News and Media Relations B.J. Almond.

"At one point early Sunday morning, we had a news helicopter flying over campus," Almond said. "News crews usually have to go through the News and Media Relations office, but we didn't even know about it until Captain Rodriguez called me saying that there was a helicopter above on Sunday morning around 1:30 a.m. Then we started getting requests for a statement."

Wiess president David Payne said there had been some concern at Wiess over reporters coming on campus.

"There was a reporter who came onto campus during NOD, and he wasn't supposed to be there," Payne, a senior, said. "He never made it inside of Wiess because he was quickly stopped by RUPD and student security."

"The news reports make it seem like the administration is allowing this to happen, but it actually happens because systems like EMS exist, which is a good thing," Elena Rodriguez said. "At bigger state schools, I don't even know what they do in these kinds of situations. It's annoying that the news profiled us when we are so much safer than state schools."

Almond said Rice does not coordinate student interviews on campus because students do not have the authority to speak on behalf of the university.

However, Almond said Rice could not stop the news crews from talking to students on public property, such as on the Outer Loop, which is technically public property.

Despite the negative media attention, Hanszen College senior Sam Stein said he was glad to hear that students put safety above all else.

"I think it's good that we were conservative in calling ambulances rather than the alternative," Stein said. "It's better than walking your friend back to their room and pretending that nothing bad happened."

Whitehead said it was important to focus on the positive.

"I don't think any of us are happy about the 10 students transported to the hospital, but let's not lose sight of the 1,000-plus kids who had a good time, were well-behaved and got home safely," Whitehead said.

Clemente Rodriguez said that, from an overall security perspective, NOD was a success.

"No county citations were issued, no criminal arrests, no other referrals for any other incidents except for public intoxication," Clemente Rodriguez said. "The students were well-behaved."

Payne said the party was well-organized.

"Security, caregivers, even partygoers did a great job getting their friends help when needed," Payne said. "It was a collaborative effort between students, RUPD and [REMS]."

Hutchinson agreed that the party was run well, but also said that the high number of transports was disappointing given the relatively few alcohol-related incidents that have occurred during the academic year thus far.

"Prior to this last weekend, we had been having a good year," Hutchinson said. "The weekend before NOD there were no [alcohol-related] incidents and during Centennial Weekend there were very few. That makes it more disappointing that there was a lack of responsibility this weekend." 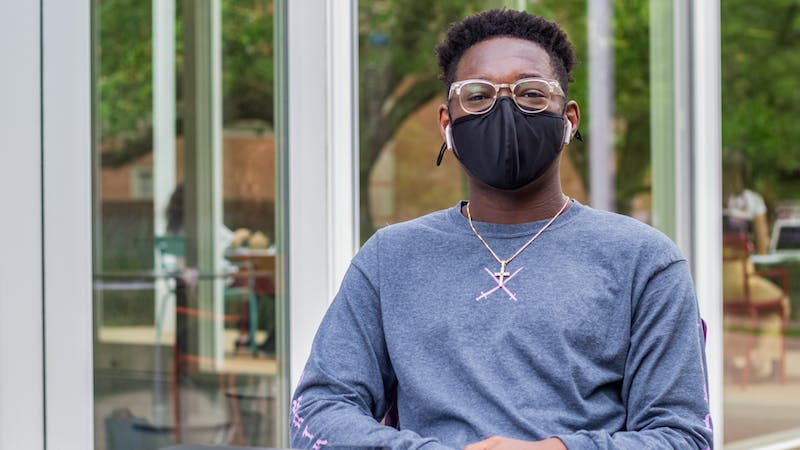 When Edesiri Mushale was in high school, he thought he wanted to be a doctor.  “My mom is a nurse and I really liked helping people,” Mushale, a McMurtry College senior, said. “I didn’t really realize how long the process [of becoming a doctor] was going to be.”  However, his experiences on various robotics teams led him to change his interests. Mushale first joined the robotics team in the seventh grade; in high school, he continued with the activity and joined a larger team.