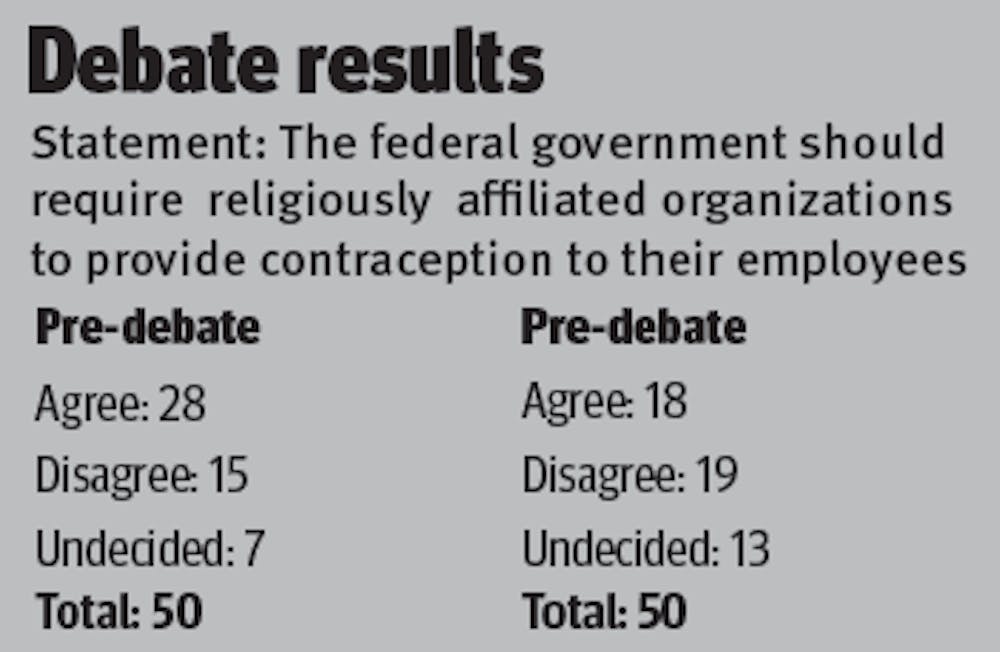 Eight Rice students tackled the "down and dirty" of childbirth during the Baker Institute Student Forum Spring Debate on Tuesday evening.

Members of the Rice Conservative Forum and the Rice Young Democrats met at the Baker Institute to discuss whether the federal government should mandate religiously affiliated organizations to provide contraception to their employees.

Slough began with an introduction about the importance of essential healthcare for all women.

The Young Democrats noted that family planning, a term referring to a couple's ability to plan when they want to have children, helps taxpayers by saving money on unplanned births.

Dargan's opening statement introduced the Conservative Forum's position, which advocated for the protection of the free expression of religious ideals.

"We are here to protect specific institutions from being forced to violate their own personal conscience," Dargan said.

Salhotra responded to this view, claiming that mandating private entities that receive public funding to provide contraception does not violate the First Amendment.

"If you are going to play in the public playground, then you have to play by public rules," Salhotra said.

Guo said that by investing in contraception now, the United States could save money in the future.

"From an economic standpoint, it is good for all," Guo said.

Kuhnen responded by saying that the United States was founded on principles that include freedom of religion.

Salhotra said organizations would not be mandating people to use the contraception.

"We're just saying, 'let's provide it and give them the choice,'" Salhotra said.

In one of the cross-examination questions, Lauriello asked whether the Young Democrats would agree that forcing a religiously affiliated institution that considers contraception a sin to provide it would constitute a moral problem or dilemma.

Rekhi said the morality of the situation was irrelevant to the religious affiliation of the institution.

"We believe the real moral problem is depriving women of the care they need just because of some belief system that is imposed on them," Rekhi said.

Wiess freshman and BISF member Zach Watterson said he understood the arguments on both sides.

"I thought the opening statement by the Young Democrats was very strong, but I still can't see religious organizations being forced to provide contraception if that violates their fundamental beliefs," Watterson said.

Though no winner of the debate was declared, 50 members of the audience were polled before and after the debate about their opinions on whether religiously affiliated organizations should be required to provide contraception to their employees.

Post-debate, the number of audience members who believed the federal government should require religiously affiliated organizations to provide contraception increased by 20 percent.